The Oberlin Review • May 3, 2019 • https://oberlinreview.org/18757/sports/oberlins-hammer-throwers-compete-with-passion-win-big-despite-dangers/ 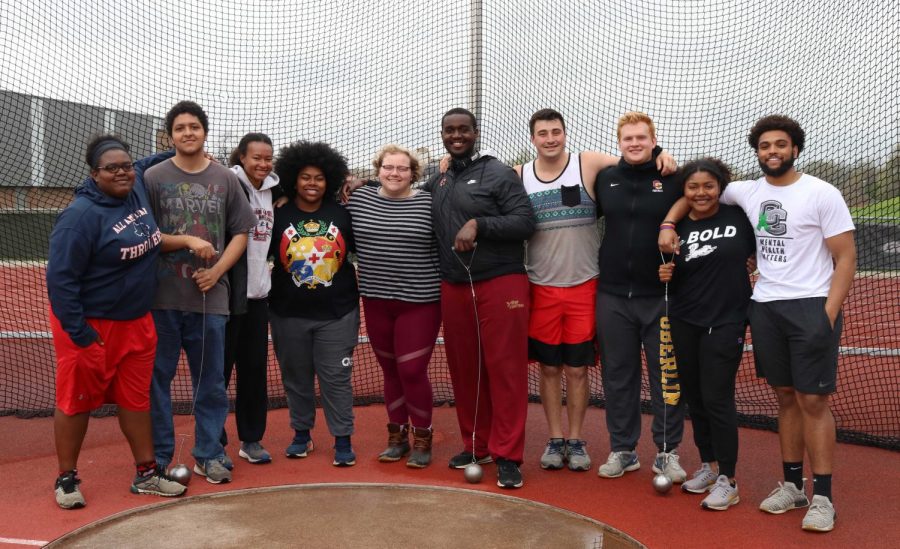 Because the hammer throw is banned at most high schools across the country, many of Oberlin’s throwers were first introduced to the event when they arrived on campus. After years of hard work, College senior Hank Sinn and College junior Maya English have a chance to qualify for nationals in the event.

The hammer throw might be the most dangerous event in the sport of track and field. It injures, and occasionally kills, more athletes and spectators per year than any other track and field event. Because of its inherent danger, it has been banned from most high school programs across the country. Ironically enough, for many Oberlin field athletes who participate in the hammer throw along with shot put, javelin, and weight throw, the hammer remains their favorite event.

“Yeah, there’s an element of danger,” shrugged College junior and thrower Maya English. “But we know the rules — when someone’s in the ring, we watch where they throw.”

“Of course, in any sport, you have to be on edge,” Sinn said. “But we know our boundaries and rules to ward off danger.”

Because hammer-throwing is not allowed in most high school track and field programs, many athletes are first introduced to the event at the collegiate level. The hammer toss is similar to the shot put, according to Sinn, because it is also thrown from a metal court, and the movement of the throw is a rotational one, so the thrower spins in a circle to gain momentum before they release the hammer into the air. Sinn was unable to learn the hammer toss in high school, and English only learned it on the side, as her main events were the javelin and shot-put.

“I didn’t know a single person in high school who threw the hammer,” Sinn said.

Sinn and English, as well as the other Oberlin hammer throwers, had to develop both the physical skills and the mental comprehension of the event simultaneously during their first year of college — an uncharacteristically late time for a field athlete to acquire a new skill. But the hammer athletes have been trained by Associate Head Track and Field Coach John Hepp, who, according to Sinn, really helped build a foundation for their throws.

“Hammer is so individual and so different from other events we were familiar with,” Sinn said. “[Coach] Hepp showed us the importance of footwork, and the other movements that help you throw.”

When Sinn started training to throw the hammer, he found that Olympic lifts, like hang cleans and hang snatches, proved most effective for competitions.

“That similar motion translates,” he said. “If you’re better at those Olympic movements, you’re gonna be better at hammer and weight.”

For an event as technical as the hammer throw, the mental preparation is just as important as the physical. Hammer throwers tend to develop physical cues they focus on when they enter the circle, as a way to clock in and focus on how they like to throw.

“People have stylistic elements to their throw,” said English, who explained that she likes to tap her foot while rotating to remind herself to build momentum.

Sinn, on the other hand, prefers to take his first wind slowly, and then build momentum by sinking into his hips and pushing through — hard — on his big toe.

No matter the logic behind Sinn and English’s individual cues, they are working. Both Sinn and English, as well as other qualifying members of the Oberlin Men’s and Women’s Track and Field Team, will compete today and tomorrow at the Outdoor Track and Field North Coast Athletic Conference Championships at Kenyon College in Gambier, Ohio.

“My goal for this weekend is to have a personal record, but that’s my goal every weekend,” Sinn said. “But ever since hammer became my favorite event, it’s been my goal to set the conference meet record.”

The record, set in 2014 by current Denison Assistant Track and Field Coach Mike Petro, sits at 56.54 meters. Sinn’s chances of trumping this record are high, as he threw 14 centimeters past the record mark last weekend.

English is also hoping for a personal record, which would be somewhere near the 50-meter mark. She threw over 50 meters earlier in the season but was disqualified after accidentally stepping out of bounds, so she is hoping to redeem herself this weekend.

But, of course, while an individual team sport requires that each athlete performs their very best on their very own, Sinn and English are just as excited for the potential success of their teammates as they are for their own.