The Oberlin Review • May 3, 2019 • https://oberlinreview.org/18779/arts/audience-fills-birenbaum-for-moonlight-my-heart/ 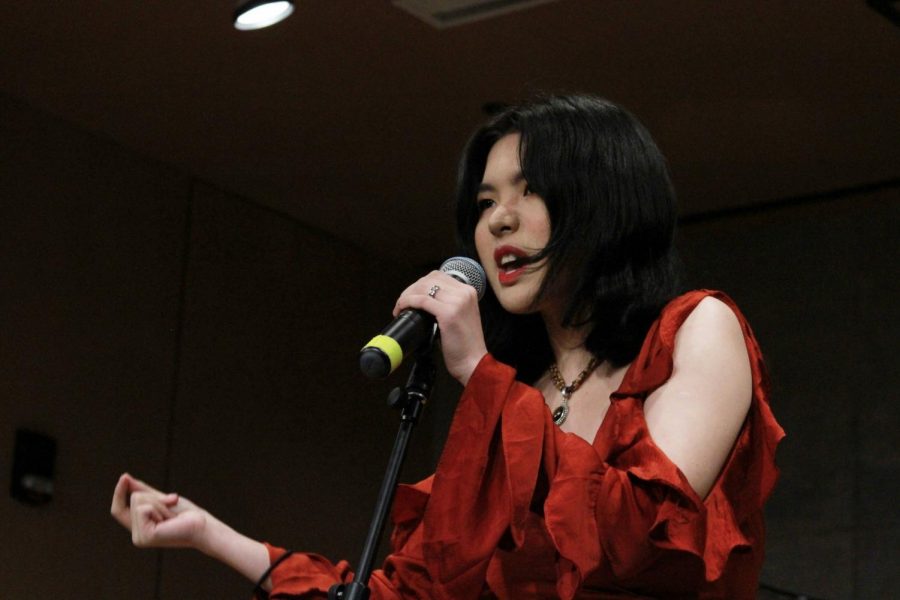 Editor’s Note: The interviews in this article were conducted in Chinese and translated into English.

The Chinese Music Showcase, Moonlight, My Heart, hosted by the Chinese Students Association, drew an impressive turnout last Sunday for an evening of singing, musical performances, and celebration. Despite the fact that it was late in the week, and that the event saw sparse responses on Facebook, the audience almost filled the Birenbaum Innovation and Performance Space, a bar on the lower level of The Hotel at Oberlin. The event featured performances that varied from traditional and contemporary Chinese music to songs from the West.

As the lights dimmed, College first-years Xenia Wei and Rachel Fang, the hosts for the evening, greeted the audience and introduced the first act. The band Lyre ’n Laurel opened the night with a jazz version of “Seven Nation Army,” the hit single from the rock band The White Stripes. It was not until the second performance that the audience heard a song in Chinese: a song called “姗姗来迟的你,” or “Sincerely Yours,” sung by a vocal duo to a playback. The next act introduced the audience to another musical tradition. Third-year Piano Performance major Fanye Yuan played “N. Kapustin Variations,” which the hosts described as “an improvisational fantasia-like jazz style piece in a not strict variation form.”

There were 16 performances in total, presented by students from both the College and the Conservatory. The program was split into two parts with a brief intermission in between. While the all-encompassing scope of performances continued into the second half, the audience was treated to some more “traditional” Chinese performances. First-year Piano major Xiang Su accompanied first-year Economics major Wenting Gao on the piano as she sang “茉莉花 Mo li hua,” or “Jasmine Flower,” which the emcees described as “a piece of traditional Chinese music that dates to the 18th century … [and] delivers the compliment and love toward jasmine’s pureness and elegance.” Kumo Shao, a second-year Computer Science and Psychology major, sang an excerpt from the famous Pingju “乾坤带 Qian kun dai.” According to Wei and Fang, “Pingju is a kind of traditional Chinese opera among over 300 types of operas in China.” The excerpt tells the story in which a princess, by alluding to a historical story, persuades her father to grant mercy upon a general and allow him to compensate for his faults through services to the Tang dynasty.

The showcase offered an assortment of appetizers, such as shrimp cocktail shooters, vegetable spring rolls, and pita chips with hummus, as well as pastries such as eclairs, lemon bars, and cannolis, all prepared by hotel staff. The dress code for the activities was semi-formal.

“We want to create a semi-formal event so that people can dress up and enjoy great music, food, and time with friends in such a nice environment,” Wendy Li, a College sophomore and the CSA’s event coordinator explained in an email to the Review.

Fang founded the Chinese A Capella Team and collaborated with the Chinese Students Association in designing this event.

This willingness to welcome students from various backgrounds was echoed by Li.

“The concert will be held annually,” she said. “In the future, we will definitely try different strategies to attract a wider student body.”