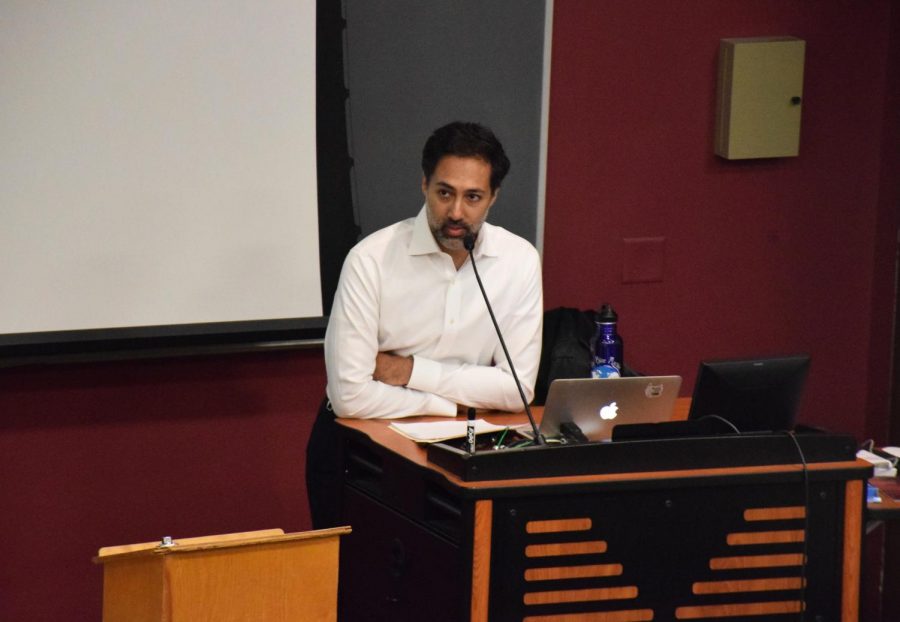 Manu Karuka is an assistant professor of American Studies at Barnard College and author of the book Empire’s Tracks: Indigenous Nations, Chinese Workers, and the Transcontinental Railroad, which was released in March of this year. Karuka was a double-degree Oberlin student who graduated in 2000 with majors in Composition in the Conservatory and South Asian Studies in the College. After Oberlin, Karuka earned a Ph.D. in American Studies from New York University. Karuka delivered a talk at Oberlin about his book on Monday, April 29.

Can you summarize your talk for folks who weren’t able to attend?

I spoke about the core arguments of my book, Empire’s Tracks. The book is about the Transcontinental Railroad, and it provides the history of the railroad through the lens of imperialism. So I talked about the three major themes that I organized the book around — those are the themes of counter-sovereignty, which is how I understand the ways that the U.S. manifests its power over the territories that it claims, which is in reaction to prior Indigenous collective life. And I talked about what I call modes of relationship, which is a type of analysis that focuses on the production and reproduction of relationships, and that’s really drawing from the work of Indigenous feminist scholars and activists. And finally, what I call continental imperialism, which is how I understand the process by which the United States claims and maintains power over North America.

Could you elaborate on that last point? How did the U.S. maintain power during the period of your research?

Well, there are three major texts I look at for that argument. The first is a classic essay by the historian Frederick Jackson Turner, who is arguing about what he calls the frontier — it’s remembered as a frontier thesis. Turner argues that the frontier process — which, for Turner, is where civilization meets savagery — this process is what makes the United States exceptional in the world. So I read that essay in relation to two other works; one is by W.E.B. Du Bois, and it’s called “The African Roots of War.” It was published in The Atlantic Monthly in the 20th century. In this essay, Du Bois was trying to answer why the first World War happened and what led to the first World War, which at the time was a completely shocking and unanticipated war — an unprecedented war. Du Bois’ argument was that it was a European scramble for Africa that led to the violence and the outbreak of the first World War. The third text I look at is Lenin’s pamphlet on imperialism. Lenin also was trying to chart out why the first World War happened. Lenin also looked to the European division of the world, the precedents of financial capitalism over other forms of capitalism, and the emergence of cartels — concentrations of capital under fewer and fewer hands — and the competition between these cartels that led to the outbreak of the war.

I’m interested in reading Lenin and Du Bois, their arguments, and the specific details of their arguments in relation to the history of North America. One of the things that becomes clear when we understand the history of North America from the perspectives of Indigenous nations is that this process that they’re both describing is imperialism. That was taking place in North America a few decades before Lenin found it taking place in other parts of the world in Asia and Africa and Latin America. So there’s a connection between North America and what was once thought of as the Third World, what’s now called the Global South.

What first got you interested in this line of research?

I was led to this work by a question which stays with me: What does anti-imperialism look like from the vantage of North America? When I was an undergraduate student at Oberlin, I was studying South Asian Studies, and I was deeply immersed in the study of British imperialism and British colonialism in South Asia — the history and historiography of that, the way it’s written and how it actually happened. And so I was deeply interested in questions of imperialism and colonialism. But what brought me to this is trying to understand those questions and those histories here in North America itself. I started my work with that question and continue to ask that question.

In a similar vein, why do you think it’s important for your students and readers to engage with these questions and learn about this episode in American history?

I’m a student of Du Bois. Du Bois wrote so much; he left so much work for us. But among those is his magisterial history, Black Reconstruction in America, which many — myself included — understand as the greatest work of U.S. history that’s been written. But Black Reconstruction is not just a work of history; it’s also a work that provides us a blueprint for radical, democratic, transformative change in North America. When I teach to my students, I say this is a living history because history is not over. Some of the core questions that we face right now — ecological devastation, runaway climate change, mass extinction of species, mass suffering, extreme poverty, police violence and vigilante violence, the rise of organized racist violence — are deep elements of the history of this continent. In studying the history, I think we’re studying the history of struggle and resistance and also the history of contradictions in power, the history of contradictions in assertions of what I call counter-sovereignty. All of these can be useful for us today as we try to chart a path to collective survival.

Can you to elaborate on how you think your time at Oberlin prepared you to enter academia and grapple with these huge questions?

Oberlin has a really unique intellectual culture. I was happy during my visit to meet a number of students — students in [Assistant Professor of Politics] Charmaine Chua’s class, students through a co-op, and student leaders of organizations — and just, you know, hear some of the questions that are in the forefront of their minds. Oberlin really has a unique intellectual culture, and I’ve taught on a number of different campuses. It’s something that shaped me. And it wasn’t just the culture, you know — we would teach each other. I learned as much or more from my fellow students as I learned in class as an undergraduate. And those lessons, that way of working and thinking collectively really shaped my intellectual trajectory.

Do you have anything else you want to add?

I think I was most excited to meet students and hear what they are thinking about now, and I’m really inspired by the visions and the work that the students are doing. I left Oberlin feeling a deep gratitude to the students who are there now for the work that they’re doing collectively, not only to learn but to shape the future of the institution.