The Oberlin Review • May 10, 2019 • https://oberlinreview.org/18863/arts/indie-singer-songwriter-anna-burch-gives-poignant-intimate-performance/ 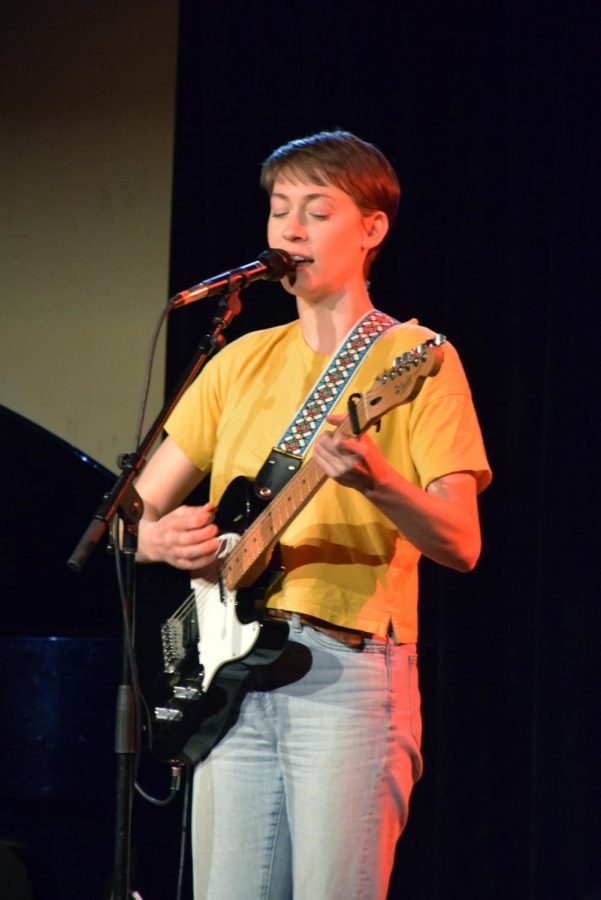 Singer-songwriter Anna Burch sings onstage at the Cat in the Cream on Tuesday.

Detroit-based singer-songwriter Anna Burch gave an intimate performance at the Cat in the Cream Tuesday night as a stop before her show at the TREEVERB Music Festival in Ann Arbor, Michigan, on June 1.

Burch has been a part of a few folk-rock bands in the past, one of which is Frontier Ruckus. Her stab at the indie-rock genre is a stark contrast from Frontier Ruckus’ banjo-twanging songs, more personal and ambitious territory for Burch. Her song demos — which she wrote after finishing graduate school and moving to Detroit — caught the attention of the Polyvinyl record label.

Burch’s deeply personal themes range from a relationship with a drug dealer in “Asking 4 A Friend,” her struggles with the nomadic lifestyle of a musician in “Yeah You Know,” and the stomach-turning feelings of new affection in “Tea-Soaked Letter,” one of her most popular tracks and the final song of the night. She sang over a chorus of airy harmonies and guitar riffs reminiscent of Snail Mail.

“‘Tea-Soaked Letter’ was the last song she played, and it’s my favorite song of hers,” said College first-year Sofia Zarzuela.

Burch sat down after the show to talk about her solo project and how it differed from being in a band.

“For one thing, I have a lot more engagement with this project because it’s mine,” she said. “There were times when being on tour, I could check out in the back of the van and space out. But now, it feels more all-involved. Which makes it good but stressful sometimes — I do prefer it, and I definitely feel like I’m treated more respectfully than I was being a singer in a band.”

The live midweek show was buzzing with interested students. Occupants slowly trickled into the Cat in the Cream as Burch’s set, which ran for about an hour, took place.

“I write indie music, so I really like seeing it at shows — especially musicians who I listen to because I’m like, ‘Oh, that could be me! I could do that,’” Zarzuela said.

Burch led her four-piece band, complete with two guitars, one bass, and drums, through a night of songs from Quit the Curse and from her new, unreleased record. Burch talked about the recording process for her first album.

“It was very drawn out,” she said. “One good thing about it was that we got to spend a lot of time arranging the parts for it. A lot of the guitar parts were super thought-through.”

Her newest record was recorded in less time. “It was like two weeks, and it felt really organic,” Burch said. “It was really nice — it was home studio, but more set up and equipped this time. We got to play a lot of it live, and I spent a week doing vocals.”

Burch’s live sound maintains the familiar tone from her 2018 album. This level of continuity left audience members knowing exactly what they would be hearing, and it was pleasantly surprising. The same flowy, ’60s-esque surf-rock guitar strumming patterns and chord progressions provided a platform for Burch’s smooth-sailing voice, at times backed by harmonies in all the right places.

At one point in the evening, however, Burch took to the stage alone to perform a solo song. She hesitantly asked those in attendance whether they would prefer to hear a brand-new song that she was likely to mess up or a more practiced song that she could perform with confidence. The crowd’s response was resounding: “The new song!” Burch set aside her guitar and took to the piano, and Oberlin students were among the first people to hear the song performed — and Burch’s ease on the piano was a wonderful payoff.

“Anna Burch is a great blend of sad girl singer-songwriter and ’90s-style angst,” College junior Aly Fogel wrote in an email to the Review. “The audience was pretty quiet that night and she was adorably awkward on stage. She has a really charming presence, which added to the intimacy of her music. Especially the new song she played on the piano — she’s just a great mix of fun lyrics and raw emotion.”

Burch’s songs were musically light and consistent. They transitioned naturally into each other, and she warmed the Cat with her humble stage presence during the song breaks. Her music fit the essence of spring in bloom.