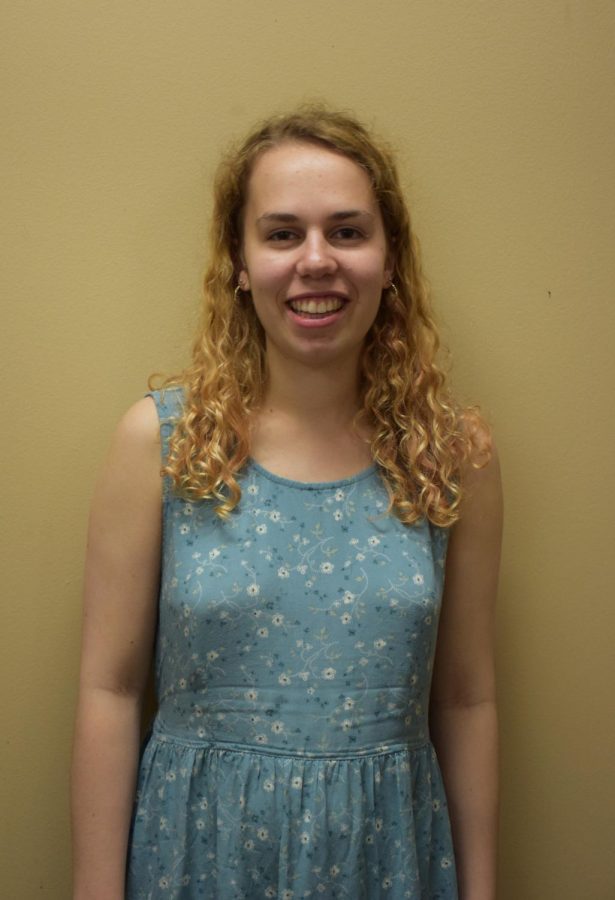 Mikaela Fishman is a senior Visual Arts major and the This Week editor for the Review. She researches, writes, and creates the graphic design for the centerfold spread of each issue. Her spreads have covered fun topics from creative dorm rooms, student doodles, bathroom reviews, to informative topics like election information and grassroots activism at Oberlin. She has been a beloved member of the Review staff and will be missed next year.

Editor’s Note: This interview contains mentions of the death of a family member.

How did you become a Visual Arts major?

Well, I came to school not knowing what I was going to major in. I had literally no idea. I had done layout for my high school newspaper and I always did art and stuff. And then my sophomore year I took two art classes, but I still didn’t think I was going to be an Art major. And then I was like, well, I have to declare my major. So I made a list. I looked at the list of every major at Oberlin and I wrote them all down and then I crossed every single one of them off. And then I was like, “Well shit, I have to transfer,” because the only thing I wanted to do was graphic design at that point. And then I went to talk to my internet art professor Jacob Ciocci, who was a visiting professor. He graduated from Oberlin and became a graphic designer, and he was like, “Yeah, you can totally go to Oberlin, be an art major, be a graphic designer, you’ll learn a lot.” There was literally not a single other major that I was even vaguely interested in.

I like the process of making art, but I’m not really a big concept-idea person. Now I kind of am more [into that kind of art], but I like when someone tells me, “This is what I want it to look like,” and then I make it look that way. Even with the This Week spread, I’m still deciding what it’s going to look like, but it’s within a parameter. If I’m going to do a spread about doodles at Oberlin, that means that I’m going to make the spread sort of look like doodles. Whereas creating a piece of art is like, “OK, here’s my feelings. This is how I feel. It’s all going to be me.” I’m a feelings person, but I don’t really feel like I have a lot to say. I just enjoy the process of creating art.

Can you tell me about your senior show last Friday?

My aunt Andrea died in July of last year, so obviously I was thinking a lot about that. We were close, and she died extremely unexpectedly — no one knew she was going to die, probably including her. And no one said goodbye or anything. So that was something I was thinking about.

At the beginning of the year I started off with the long exposure photography. That was fun. And then I started making this animation about a Joanna Newsom song called “Cosmia.” It’s about Joanna Newsom experiencing the death of her friend. I really found a lot of meaning in that. The animation became a way for me to process. Night photos felt like they represented the big loneliness of life and death and everything.

What I ended up doing for the show is I had this big studio room that was just mine. And I had these long exposure photos and I had the “Cosmia” animation. And I had these questions hung up that said, “Where are you once you’re gone?” “I am so scared to not exist,” and “You were just here.” Those were the big existential thoughts that I was feeling and that kind of drove the whole thing.

Me and my partner [College senior Gavin Epstein] drove across the country over Winter Term. And in that drive, I asked them every single question that I could think of in terms of all of the things I had wondered about them, the whole time that we’ve been dating. I took the recording of that conversation and made it into a sound piece and that was playing on headphones in the gallery [during my show]. That’s kind of my attempt to understand another person completely, because I feel like if you can go through life and fully understand another person, then you have created meaning in life.

I also have this video piece that was a bunch of photos from our trip, abstract photos. And that was another sort of way of attempting to figure out everything about America through these photos or summarize everything in the world briefly.

Was there any sort of like feedback between that project and what you do at the Review?

I say that I’m not really like a concept- or idea-based artist — I would rather just do graphic design — but I gotta say for this art show I really did get into the concepts and I really did get into the emotional whatever stuff. Whereas what I do for the Review is really, “What do I think would be interesting and fun for the Oberlin community to read about?” And “What is interesting for me to learn about?” And “What aspects of campus need more attention?”

I want to use my graphic design skills to do something good for the world. I feel like a lot of nonprofits and small organizations that are doing really good work don’t get a lot of credit because they have bad websites and bad promotional materials. I think you get a lot of credibility from having good-looking art stuff, so I want to do that for those people. I would ideally like to work with really awesome people doing graphic design so that I meet really cool people and do something useful.

What has been your favorite This Week spread that you’ve made?

I liked the ones where I asked a lot of people for submissions, like the doodle spread. That was just super fun to see what everyone’s doodling. That might’ve been my favorite content wise. Something I’d wanted to do for my entire four years at Oberlin was review the bathrooms, so I was glad that I had a chance to do that in a spread.

How do you go about making a This Week spread?

I knew that it was going to be a huge job. So over the summer, I made a list of all these possible things that I could do spreads about, and my dad helped me because he really wanted to influence what goes into the newspaper. He had a lot of very good ideas. And so every week I look through my list and see what I want to write about.

That’s really sweet of him!

One time I was doing a spread about how to go on a date in Oberlin, and I thought it was going to be kind of cute and normal. But then I was thinking of some really weird dates you could go on, so it kind of took a turn for the weird. My parents were visiting that week, and my dad sat in the office with me and basically coerced me into drawing all these monsters and making it really weird. Every time I’d draw something, he’d be like, “No, it should look like this.” He changed it up, but I appreciate him doing that.

Is your dad an artist?

No, my dad is a middle school math and science teacher.

What? Why is he giving you all this art advice?

That’s a major life question. But my dad actually does know a lot about art because it’s definitely in his family, and he is good at art. My family gives me constructive critiques on the spreads every single week. It’s very sweet. They’re very involved.

Are there any stories you want to tell about doing This Week?

When I did the scavenger hunt one, all these people emailed us asking for help with it, which was kind of funny. But that’s not really like a “story” story.

Did anyone win the scavenger hunt?

I don’t know because the prize is this sign — it says the real prize is the friends you made along the way. So you don’t really win, you’re just a sucker because you went through the whole thing and then all you get is this stupid sign.

What if you did it alone and you have no friends with you?