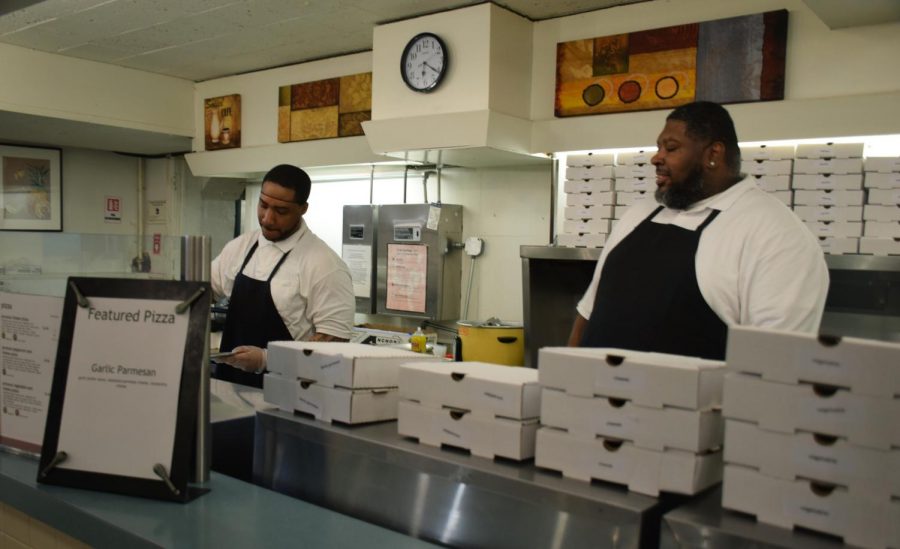 CDS workers prepare pizzas in the Wilder DeCafé. Hourly employees continue to express concerns over the impacts of the AAPR recommendations.

Tensions remain high between Oberlin’s unionized hourly workers and the Academic and Administrative Program Review steering committee. After weeks of collecting community feedback, the committee is wrapping up its work and preparing to submit its final recommendations to President Carmen Twillie Ambar at the end of this semester.

However, since the AAPR first publicly released its areas of recommendation in late March, unionized workers have consistently expressed concerns regarding proposed changes. These concerns have largely centered around feelings of job insecurity created by the AAPR’s general recommendations, as well as questions about the transparency of the AAPR’s process. Many of these concerns have been previously covered by the Review (“AAPR Unveils Draft of Final Recommendations,” May 3, 2019).

According to Oberlin College Office and Professional Employees President Diane Lee, who works as the interlibrary loan supervisor at Mary Church Terrell Main Library, many union members still don’t feel that members of the steering committee have heard their concerns, following multiple opportunities for public comment.

“I cannot think of a question that has actually been answered,” Lee said. “So everything is still outstanding.”

OCOPE member Linda Pardee, department secretary for the English Department, emphasized the stress created by the AAPR process, which has left many hourly workers wondering if their jobs are on the line.

“I ended up taking last year off for medical leave because of the stress,” said Pardee, who was let go from her prior position at the College in 2017 before being re-hired. “If you look at short-term leaves or long-term leaves, I have a feeling they’ve gone up because people are very stressed, not just with the amount of work, but the uncertainty of what’s going to happen in their lives.”

According to Vice President for Finance and Administration Rebecca Vazquez-Skillings, at least some of this uncertainty is due to logistical constraints.

“The steering committee has been careful not to interfere with the processes for implementing these changes,” Vazquez-Skillings wrote in an email to the Review. “In particular, the steering committee has been meticulous about not taking any steps that would interfere with collective bargaining, the appropriate place for determining contractual details for unionized workers.”

Acting Dean of the College of Arts and Sciences David Kamitsuka, who chairs the AAPR steering committee, also responded to these ongoing concerns over job security.

“From the beginning the AAPR steering committee has recognized and acknowledged the anxiety this work is causing, particularly when it touches on employment and compensation,” Kamitsuka wrote in an email to the Review. “Our hourly employees, and our administrative and professional staff who are ‘at will’ employees, are our colleagues, neighbors, and friends, whose work is not only integral to the excellence of Oberlin but also deeply respected by the entire community. … None of this is easy, but we know that the far greater uncertainty and harm would lie in failing to make the hard choices facing us.”

Kamitsuka noted that administrative and professional staff, as well as faculty, have also faced significant reductions in recent years.

“As pointed out in the report, and throughout the process, faculty and administrative and professional staff have been most directly impacted by the budget cutting over the last two years, including the elimination of several positions, and more than $5.5 million in savings achieved through salary freezes and benefits reductions,” Kamitsuka wrote. “Unfortunately, that alone will not be sufficient for the long-term sustainability of Oberlin’s finances.”

While acknowledging that the College faces financial challenges, Lee remains skeptical that the steering committee has been forthcoming about their source data or the process by which they arrived at their recommendations.

“We want to see how they came to these conclusions,” Lee said. “For instance, the [figure] that says that the average hourly person at Oberlin is paid 34 percent higher than at our peer institutions. Well, we’ve gone to the sources that the College was willing to share with us, which are very few.”

Lee continued, saying that, when union members looked at the sources shared by the College, they did not arrive at the same conclusions.

“We were able to find, if you actually paid attention not to the job titles, but the job descriptions that are offered for each position … that our salaries are not out of line for the Cleveland-Elyria metropolitan area,” she said.

“We frequently offered other avenues for the College to save money, because it’s the secretaries and the financial folks — they are the ones who actually handle a lot of the budgets,” Lee said. “They handle a lot of the purchasing and the billing and payment requests and stuff like that. So these people see where money is being wasted.”

Concerns that wages are being cut before institutional waste are shared by members of other unions as well.

“We know the College needs to cut back, but we would like to see waste addressed first,” wrote custodial staff member Diane Fritz, who belongs to UAW, in an email to the Review. “Our concern is that we had no input before the recommendations were given to the president.”

However, Kamitsuka and Skillings maintain that employee compensation must be considered alongside reductions in wasteful spending.

Students, for their part, have been quick to support union workers. Many students have begun to sport laptop stickers reading, “I support Oberlin’s unions.” Others have advocated for hourly employees through public installations asking community members to share their thoughts on the AAPR process, as well as posters telling stories of how unionized employees have supported students in caring and personal ways. Many feel that important questions about employee compensation have yet to be answered.

“There has to be a decrease in wages, but the question now is, will a decrease in wages still mean a living wage for the people that we’re [employing] here?” College sophomore and former Student Senator Elmo Tumbokon. “I’ve heard anecdotes of many staff members here who can’t support their families [with] their current wages. What would a decrease mean for them?”

On May 15, the AAPR will bring their final recommendations in front of the General Faculty for a vote of endorsement. From there, the recommendations will be submitted to President Ambar and then to the Board of Trustees over the summer.