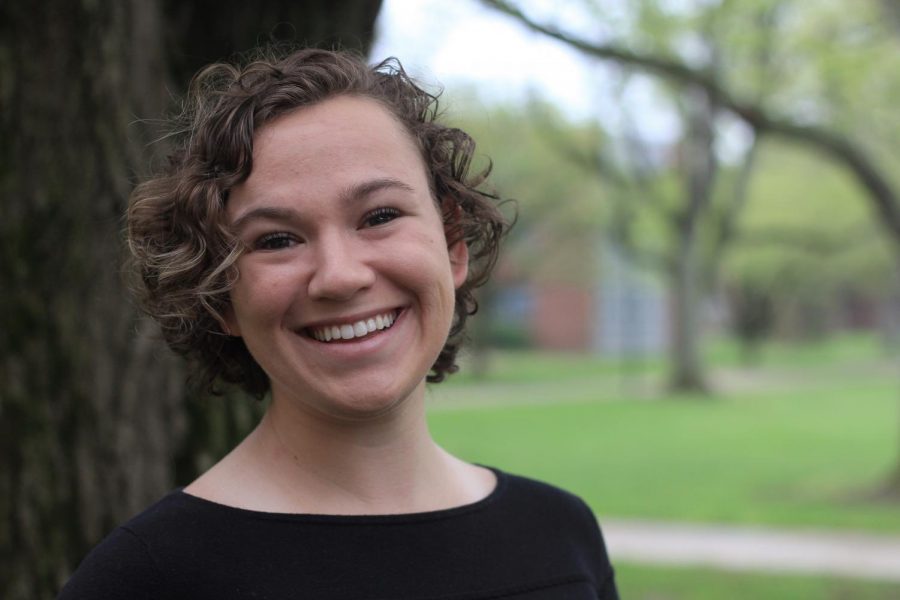 College senior and Review Editor-in-Chief Sydney Allen is a classic Obie with a wide range of interests. Throughout her tenure as a writer and editor, Allen has covered a broad range of campus and community news, including the launch of the Academic and Administrative Program Review, controversy about Gibson’s, and much more. When she’s not editing articles in the Burton Hall basement, Allen can be found on the field as a member of the varsity women’s lacrosse team, working with students as a Writing Associate, and getting coffee with the members of her PAL cohort — and she still sometimes even makes it to class. After she graduates later this month, Allen will travel to Indonesia as part of the Oberlin Shansi Program, where she will spend two years teaching English and traveling. This week, Allen sat down with next year’s editors-in-chief, Nathan Carpenter and Katherine MacPhail, to reflect on her time at Oberlin and look toward the future.

Katherine MacPhail: How did you end up with the Review? Did you always know that you wanted to do journalism here?

No. So I joined first semester [first] year. Coming into Oberlin, I had no journalism experience, and I was pretty unsure about what I wanted to do with my time. I didn’t know what major I wanted, and I was really kind of aimless. About midway through I still hadn’t found my group at Oberlin or anywhere I fit. And so I started writing for the [Review’s] News section each week, producing some terrible, terrible, really bad stuff. It’s kind of embarrassing now. But I kept doing it every week. And then that same semester, one of the production editors quit and they needed someone else. So I applied and got hired, which, looking back, I’m super lucky that happened because I’ve been with them every year — every semester — since. I’ve worked my way through being a sports and news staff writer, to a production editor, to news editor, and now I’m the co-editor-in-chief with Nathan. So it’s been a fun ride.

KM: What was it that stuck with you that made you want to continue and commit to the paper?

When I was a first-year, I was pretty shy, and so I think there was something about having a reason to go to events and go to certain spaces where I might not necessarily feel that comfortable of my own volition. And being able to go and interview organizers and faculty and staff members, and other students who were involved — and actually having a reason to do so and making connections that way — was really helpful for me. I made some of my closest friends and mentors through the paper and through stories I’ve done here. So I think that’s been a super valuable part of the job.

Nathan Carpenter: You’ve written a lot of stories throughout your time here. Which stand out to you as ones that you’re most proud of?

This year we were the first to write about the AAPR recommendations when they came out. I think that was a very concise story given all the information. It was like 1500 words, but still relatively concise. There’s been a lot of stuff. I mean so much has happened to Oberlin over the last four years between the Gibson’s trials, the [former Professor of Rhetoric and Composition Joy] Karega incident — so many different scandals. The very first story I wrote for the Review was a follow-up news story after the New York Times OpEd [Oberlin Students Take Culture War to the Dining Hall, Dec. 21, 2015] about cultural appropriation in the dining halls went viral. There’s always something happening here. People are always mad about something or people are passionate about something. There’s always something going on.

NC: The same four years that you’ve worked for the Review you’ve also been a varsity lacrosse player. I’m curious what you took from the field into the office and vice versa?

I can’t think of too many lessons I’ve gotten from both. I mean each certainly made me more confident in my own way. I think it was really important for me to have an outlet away from each of those spaces. As a student-athlete, it was wonderful to have something to do that didn’t revolve around lacrosse and the athletic community. I love my team so much, but having a space separate from that where I could go and explore different interests with different people was really important.

NC: This is obviously a very delicate moment in Oberlin’s history. I’m curious what thoughts you have about where we’re going from here?

I’m really optimistic about where [the school is headed]. I think this has been a really powerful year in terms of seeing the school actively work to introduce institutional change, and I think it’s pretty clear we have to do that. And I’m glad that we’re taking the steps to do that. I’m a triplet, and my siblings go to a similar liberal arts school that is also having financial trouble, but no one really cares or talks about it. The engagement around financial issues here is unique compared to other liberal arts institutions that are also having financial difficulties.

KM: What are you going to do next? Will you continue with journalism?

Yes! I’m super lucky to have received one of the Oberlin Shansi fellowships and I’ll be traveling to Yogyakarta, Indonesia next year. It’s a two-year fellowship where I’ll be working as a kind of writing tutor in a university. And they encourage you to also get involved in something else in the community because it’s not full time, so I’ve been talking to a lot of journalists in the area and I hope — once I get settled and hopefully learn some of the languages — to work in an English publication there. I’d love to get involved and keep writing or editing or something.

NC: What advice do you have for me and Katherine and next year’s Review staff?

I’d say keep trying to see the bigger picture. One of my favorite things to do — this is super nerdy — is to look through the Review archives and see what we used to write about, and see what used to be a big deal for Oberlin. And also talk to people who’ve been at this school [for] 20, 30 years. I talk with people who used to work here, who don’t care about sharing Oberlin’s dirty laundry and drama. You always find some funny stories but also some interesting perspectives on the school’s trajectory. I think getting as much of that information as you can really gives you a good picture of what Oberlin is, and what it has been, and what it can be. I think the archives are a really fun resource to use throughout different school projects and stuff like that.

Oh, that’s a good question. One of my favorites? This isn’t a story, per se, but in one of the old issues of the Review in like 2005 they made a huge mistake and had a really embarrassing error that made it to print. Apparently, they sent in the wrong copy of the layout to the printers. And so they published an article with the headline “PSA Motherfucker,” and we have our copy of it in the office, taped to the wall. It’s really funny. I talked so the alum who was in charge when this happened and he said he was absolutely devastated at the time, but now it’s very funny. Apparently, the article ran alongside an article that was so important that they decided to distribute anyway. I think it’s hilarious. It’s out there forever, in print and still in the archives.

KM: Is it true you briefly lived in the Review office?

No, that’s a rumor. Well, kind of. I’ve worked commencement week for the past three years because we do a Review commencement issue. And ResEd made us move out so early — at like 9:00 a.m. I think I had maybe an interview or something and I just couldn’t move my stuff into Harkness and it was raining that day. So I just moved all my stuff into the Review office for the week. And I’ve definitely fallen asleep on the couch a couple too many times. Some of it’s still there.

NC: What’s your drink at the Feve?

I go to Long Island [Night] every week. That’s one of my favorite parts of the Review, actually — going to Wednesday Long Island Night after Wednesday production. We’ve been doing it for years. When I was a first, second, and third year, I wouldn’t drink of course. But I made a lot of wonderful friends that way. It’s a great way to build community with your co-workers.

NC: Will you miss The Oberlin Review?

Oh my god, yes. The Review has been my favorite part of Oberlin. I pretty much majored in the Review. All my professors knew I cared about it more than my actual English major and that it was my priority. It’s been such a wonderful experience getting to meet all of my closest friends in this office and through interviews I’ve done. I encourage anyone who is interested in writing or journalism or even who’s just looking for a community to get involved [with the Review]. There’s so many entry points of how you can work with the Review. It’s such an impressive and important part of Oberlin College’s history and its campus life. I think people should definitely read the Review more often and keep up to date. I’ll be reading it every week while I’m in Indonesia.

NC: Unless the server is down.

Unless the server is down. That’d be a bummer. I’ll miss you guys.