The Oberlin Review • May 10, 2019 • https://oberlinreview.org/18909/sports/in-the-locker-room-with-jenna-gyimesi-college-senior-varsity-athlete-columbia-school-of-journalism-graduate-student/ 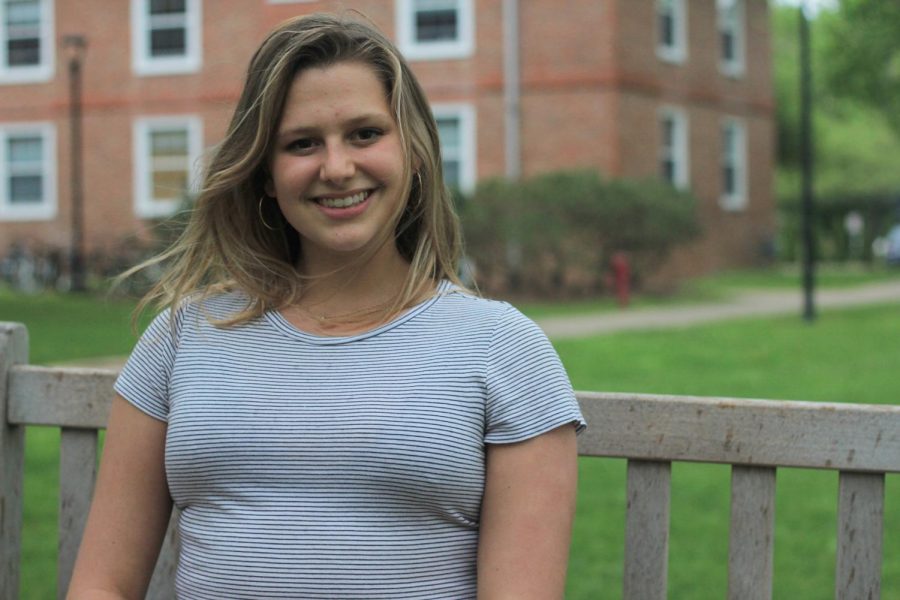 College senior Jenna Gyimesi can be found on every corner of the campus. At the Review office, we know her best as our hardworking News Editor, but she is also a varsity field hockey player, an equestrian team and fencing team member, vice president of the class of 2019, co-chair of the Student Honor Committee, and a triple-major in Politics, Law and Society, and Philosophy. However, Gyimesi will be directing her efforts toward a different campus in New York City after graduation. Next year, the Oberlin grad and Staten Island native will conquer new terrain at the Columbia University Graduate School of Journalism.

Although you’re a varsity field hockey player, do you also take part in many different club sports?

Yes! I didn’t come here as a varsity athlete — I started [playing] field hockey here my sophomore year as a walk-on. I’ve done sports my whole life, and I always had a team behind me. I came to Oberlin and did a few club sports, and I am so grateful for the friends I made there. I was seeking something different, maybe something a bit more intense and close-knit. I found that in field hockey.

Had you played field hockey before you made it onto the team?

I had taken the ice hockey ExCo, where I met a few members of the field hockey team and they told me that the team was low on numbers. So I shot [Head Field Hockey Coach Tiffany Saunders] an email at the end of my [first] year, and I didn’t hear back right away. I ended up joining the team a few weeks into the season in my sophomore year. I came in, and [Coach Saunders] gave me a stick and showed me the basics and asked if I wanted to sit in on a practice the next day. So I did. I got thrown right in and I’ve been on the team ever since.

Even though you joined field hockey, did you continue to do other things?

I joined field hockey my second year, but I was seriously involved in fencing during my first year. Fencing was something I [discovered] I loved. I just had a passion for it, and I competed heavily all through high school. I did a bunch of competitions with the club team here throughout my years at Oberlin. My [first] year [here], a few of us even competed in the Junior Olympics. I kept fencing, and sophomore year I was even captain. Even when I went abroad, I continued fencing. I actually trained with the national [Belgian] team and competed in the Dutch student conference. It was a really great experience to travel with international students and to bond over the sport.

You are involved in many different parts of Oberlin College, but I know you best as the Review’s News editor and my co-worker. How did you get involved in the Review?

I became News Editor for my senior year, but I have been writing for the Review since the very end of my sophomore year. I like news, being able to talk to the people on this campus, and to feel like I am in touch with my community in a unique way. I’m proud of my job, to present information to students. I think Oberlin students really want to know what’s going on in their community, where they live, and where their friends are, and I am so happy that I can help provide that.

The office is abuzz right now because we heard you are pursuing a graduate degree in journalism. Can you talk about that?

So I am going to the [Columbia University Graduate School of Journalism], which is not something I ever thought I would be doing. But I guess I should have, because I [have] wanted to be a journalist [for as long as] I can remember. I was that annoying kid that would shove a hairbrush in people’s faces and tell them that I was reporting live from wherever I was. I also carried this news notebook around, that I got from my local paper. I would take it everywhere, but I never really wrote in it. So I am on my way to graduate school, and I am excited to get to learn in different mediums. I’ll be doing radio, and broadcast, long form, and investigative. I want to figure out my area. I am very lucky that I got to work in print here, but I want to see where I’ll stick.

Given that the Review is still in print, you have some experience with print media. How do you feel about the current climate around that?

Print media is complicated. As much as the internet is taking over, print still exists. In some way, everything out there is all words. Even when you are doing podcast or broadcasting, my understanding is that you are still writing, even if it’s a different sort of writing. Although I am worried that people say [print] is a dying field, I don’t think it’s a dying field. I think it’s an evolving field. As long as you are prepared to cover what people are interested in, I think I’ll have a career. I also think that online forms can give you a lot more liberty online, in your ability to add audio and video, and to be creative in ways you might not be able to with print. It’s all new possibilities.

Journalists and aspiring journalists are always asked about this these days, but how do you feel about the expression “fake news”?

I think that it’s really unfortunate that there is fake news out there; I won’t deny that it is there. There is so much sensationalizing in media. Part of the reason that I am pursuing a higher education degree is so that I have the tools at my disposal to not contribute to that. I want to know how to research, and to fact-check, and to recognize fake news. Whether I end up on the production side or the writing side, I don’t know. But I want to put truth out there. If that means people don’t want to read my work as much as an untrue headline that grabs their attention, so be it. But I won’t be sacrificing my values, or my integrity to get more readers.

You’re on your way out of Oberlin and Ohio altogether. How are you spending your final weeks?

You know, there are a lot of things I realize that I have never done [during my time at Oberlin], so I am trying to do them before I go. This will probably make people cringe, but I just had my first bagel [from The Local Coffee & Tea] last week.

I’m not quite sure, but I think Local bagels are supposed to be New York style?

I disagree. If it was a New York style bagel, then it would be as big as my head. It was a really good bagel, but bagels are just so specific for me and where I come from. I’ve liked all “bagels” I’ve had before, but they aren’t bagels to me unless they taste like home. Not even just New York, but Staten Island in particular. Anything that deviates [from that] just isn’t a bagel. It can taste good, but it isn’t a bagel.

So you won’t be missing the bagels here, but what about Oberlin will you miss?

I’m going to miss the people. People really make a place. I will start off by saying that when I first came to Oberlin, I didn’t like it. It felt really small, I felt like everyone knew who I was before I even got a chance to show them. The same reasons I came in feeling uneasy about it, though, are the same reasons I am going to miss it. I have become so close to so many people. I am so grateful that my professors know me and are willing to listen to my thoughts and talk to me in a way that I hadn’t experienced before. I will miss all my friends, the bonds that I made and my team. I don’t think people realize — and I didn’t until I joined one — what a team can do for a person. I know that my team is always there and always will be no matter where we are. I’ll miss walking around campus and being able to find a friendly face wherever I go. I used to hate that. I used to love feeling like I could get lost in a crowd, and I don’t think it will be so easy to feel that way anymore.