The Oberlin Review • May 10, 2019 • https://oberlinreview.org/18944/sports/baseball-captain-brendan-mapes-breaks-two-records-closes-out-illustrious-career/ 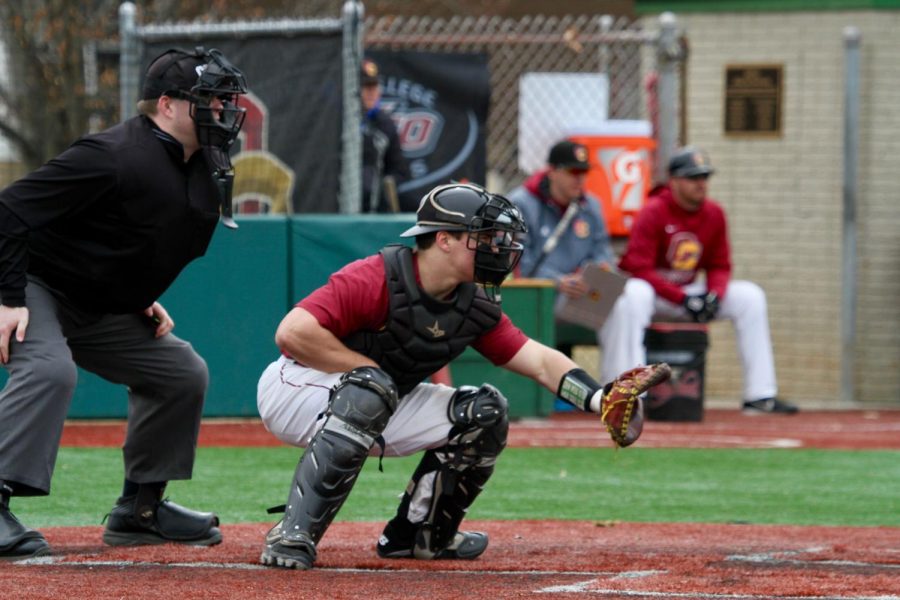 In his last official at-bat for the Yeomen, College senior and baseball captain Brendan Mapes hit an RBI single into right field to break the school’s single-season hits record. Mapes departs Oberlin as one of the best players and most respected leaders in program history.

In the bottom of the fifth inning in game two of Oberlin College’s Senior Day match-up with the Hiram College Terriers last Sunday, College senior and baseball captain Brendan Mapes stepped up to the plate with two outs and two runners on. With a 1–2 count, he drove an outside pitch just out of the second baseman’s reach and into right field for an RBI single. As he stood on first base, the home team dugout erupted, Oberlin fans got on their feet, and Hiram’s first baseman congratulated Mapes.

“Thanks,” Mapes answered. “But why are you saying that?”

Assistant Baseball Coach Brandon Jossey patted Mapes on the back.

A few seconds later, Assistant Director of Athletics for Communications & Compliance Mike Mancini announced over the intercom that with that base hit, Mapes broke Oberlin’s single-season hits record of 62, set by Andrew Hutson, OC ’15, during his senior year. In the 15–14 and 14–12 sweep of the Terriers, Mapes went 6-for-8 at the plate with a double and a triple, driving in six runs and scoring four times. In the previous day’s doubleheader, he went 3-for-8 and broke the career doubles record of 41, which was set by Eric Knight, OC ’13, in 2013.

“I’m glad I didn’t know about [either record], because I probably would’ve gotten pretty nervous in the box,” Mapes said. “But it was special. My dad checked the record book throughout the year and was pretty into seeing which records I had a chance to break, but I wasn’t really paying attention to it. Seeing [my parents] so happy about it was the best part, though. That’s why I play — for them.”

His parents weren’t college ballplayers like him or his sister — who was an all-conference pitcher at Division II Adelphi University — but they sacrificed years of summer weekends to drive the siblings all over Ohio to play in baseball and softball tournaments.

It was at a summer tournament during Mapes’ high school years that he first met Head Baseball Coach Adrian Abrahamowicz. The two had an instant connection. Soon afterward, Mapes committed to Oberlin to play college baseball. He ended up walking onto the football team as well, playing in all 30 games of his three-year career as a defensive back. However, getting banged up on the gridiron all fall and then catching 30 to 40 baseball games in the spring took its toll on Mapes’ body. For his senior year, he decided to experience his first fall baseball season and be there for his teammates all year long as captain.

Because he no longer had to train for the upcoming football season this past summer, Mapes joined former teammates Milo Sklar and Sean Kiley — both OC ’18 — down south to play for the West Virginia Miners, a collegiate summer baseball team located in Beckley, WV. According to Mapes, he played in nearly 60 games and had just four days off all summer.

Then, during the academic year, Mapes spent more time than ever before in the weight room and in the batting cages, taking extra reps.

“We had extra batting practice as a team every day, but I made sure to take 100 swings or so off a tee every day as well,” Mapes said. “I just made sure not to lose my swing, because although it’s a quick season, it’s pretty easy to lose reps when you’re overwhelmed with schoolwork and other things.”

When classes, practice, and homework took up his entire day, Mapes went to the gym to get a lift in at night — sometimes even as late as 11 p.m. Working out the night before a game became part of his routine.

“I never really thought about why I felt like I needed to do those things,” Mapes said. “I wasn’t an offensive player at all before college, so I guess my coaches [here] just gave me the tools and told me, ‘This is what it takes to get where you want to be and have success,’ so I took that and ran with it.”

In 2017, as a sophomore, Mapes was an All-North Coast Athletic Conference First-Team selection and an American Baseball Coaches Association NCAA Division III Mideast All-Region Second-Team honoree after hitting a team-best .403 with 58 hits in 144 at-bats and leading the Yeomen to the conference tournament in Chillicothe, Ohio — which Mapes claims is his favorite memory of his college baseball career.

The next year, Mapes continued to hit the ball hard, but often right at a defender. Still, he led the team with 45 hits while batting .326.

This season, his last, was his best by far, as he ended with a .441 batting clip with 63 hits in 143 at-bats. For his efforts, Mapes was named a nominee for Oberlin Male Athlete of the Year — the winner will be announced at the Obie Awards Ceremony Monday — and he will almost certainly receive All-NCAC and All-Region awards in the coming days.

However, Mapes’ teammates respect him for more than just his talent.

“What set him apart was his willingness to hold his teammates accountable,” said College junior Jack Marsjanik, the starting left fielder. “He never let anyone get away with putting in mediocre effort, and he always demanded the most out of his teammates — whether it be in the weight room, in the batting cages, or on the field.”

Abrahamowicz came up with a unique way to honor how much Mapes has meant to the program over his four-year career.

Every year for Senior Day, Abrahamowicz honors his seniors by pulling them one at a time — after a strikeout or well-pitched at-bat if they’re a pitcher, or between innings if they’re a position player. The player receives a standing ovation from the packed stands, as the entire dugout comes out to give them a hug or a handshake.

Mapes, who hadn’t pitched regularly since he was 10 years old and had only caught and played third base for the Yeomen, played all nine positions on the field before exiting the game.

“I guess [Coach Abrahamowicz] just thought it would be a fun way for me to go out,” Mapes said. “I showed up to batting practice that morning, and he laughed and said, ‘I’ve got a plan for you today.’ He kept it a surprise until right before the second game.”

Mapes isn’t the only player on the team who is versatile enough to play several positions. College senior and fellow captain Ian Dinsmore was a standout shortstop his first year, before transitioning to third base and getting some time at second base the next two years. In his final season, Dinsmore became the Yeomen’s ace, recording a team-low 3.09 ERA with five wins and just one loss. In fact, Mapes said watching Dinsmore thrive on the mound was his favorite part of his last season.

“Working with Mapes is one of the things I’ll miss the most about Oberlin baseball,” he said. “On the field you can see the great success he has, but off the field I’d say he’s an even better person and one of my best friends. He gave his all for our team every single day and constantly pushed himself and others to work harder, which is why he will retire as one of the best to ever play here.”

Perhaps the next time Mapes receives a standing ovation at Dill Field, it will be because his #29 will have become the fourth number to be retired in Oberlin baseball history.