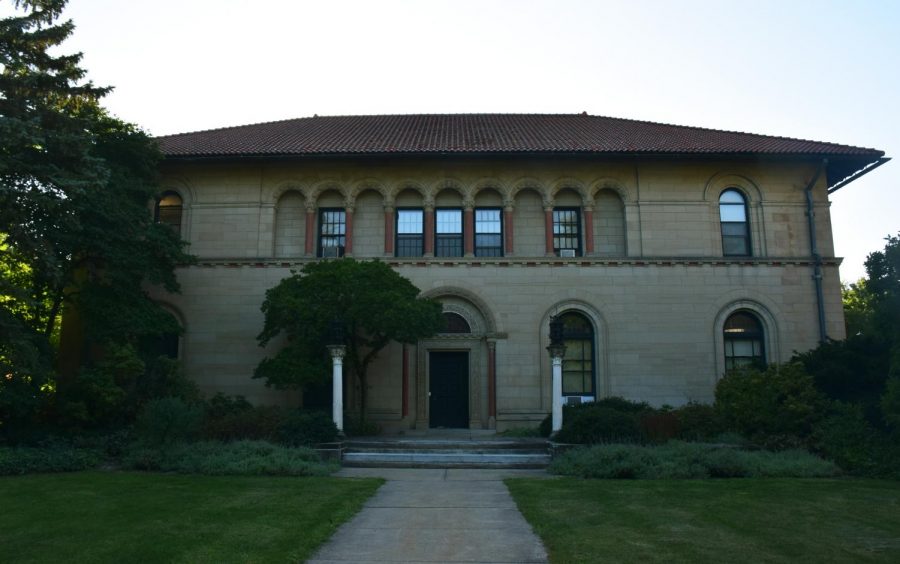 The Cox Administration Building houses the Dean of the College of Arts & Sciences’ office. Currently, both the College and the Conservatory are engaged in an active search for new deans.

In a time of unprecedented institutional change following the recommendations of the Academic and Administrative Program Review, both the College and Conservatory have launched active searches for new deans. The AAPR, which concluded this past spring, was chaired by Acting Dean of the College of Arts & Sciences David Kamitsuka and vice-chaired by Acting Dean of the Conservatory William Quillen.

Both Kamitsuka and Quillen are currently filling their positions on an interim basis. Kamitsuka assumed his position in June 2018 following the resignation of former Dean of Arts & Sciences Tim Elgren. Quillen stepped into his role this past January after former Dean of the Conservatory Andrea Kalyn was appointed president of the New England Conservatory of Music.

Professor of Physics Yumi Ijiri is chairing the search for the next Arts & Sciences dean, while the Conservatory search is chaired by Professor of Clarinet Richard Hawkins. Both committees were elected through faculty governance processes in their respective divisions. According to Ijiri, the College committee has begun establishing its expectations for the full-time dean.

“We’ve outlined maybe a half a dozen key features in what a new dean will have to be involved in doing,” she said.

These include skills like supporting faculty and staff, increasing student satisfaction and retention, managing and growing the budget, and implementing the AAPR recommendations, according to Ijiri.

Both committees will work closely with the Office of the President in finding candidates.

“[The new dean will] have to be a strong administrator with an understanding of liberal arts colleges and the challenges that our institutions are facing,” said President Carmen Twillie Ambar, who sits on both committees. “It’s those high-level visionaries that I believe will be the best candidates. Because I think Oberlin is the type of place that we want not to just be a part of higher education — we want to lead higher education.”

For some, the searches have raised concerns about institutional stability, given that the next deans will oversee the implementation of the AAPR recommendations that were shaped by Kamitsuka and Quillen.

“I am concerned,” said Professor of Psychology Cindy Frantz, who also sat on the AAPR steering committee. “I’ve been here for 17 years, and I’ve never seen as much turnover in senior staff ever. I mean, new president, we’re going to have a new director of development, the new director of admissions has only been here a couple of years, new chief financial officer, you know. There’s been a lot of change, and it’s pretty unprecedented.”

Still, Ijiri maintains that the searches represent an important opportunity.

“I think it is a lot, but it is what it is,” she said. “This is where we are. Would you plan this? No, but here it is, and so I think our aim is to take advantage of that and use that as best we can.”

Hawkins agrees, highlighting that moments of change can be exciting.

“I feel like everything is under control and everything’s in really good hands, and we’ve got some really positive people that have applied,” Hawkins said. “I think everyone feels pretty good about it right at this moment. There is a lot going on, but you know what? It makes everyone step up to the game. And I think it’s good because it keeps everybody on their toes and really kind of puts the microscope on everything that we’re doing here and making it better.”

While Frantz shares Hawkins’ optimism for Oberlin, she’s worried about the idea of introducing new leadership at such a precarious moment.

Ambar shares Frantz’s caution, noting that — should the next dean of either division come from the outside — stepping into the momentum of the AAPR implementation would be difficult.

“I think transitions are always complicated and so I absolutely have concerns about it,” Ambar said. “I think I’d be [un]reasonable if I didn’t. If there happens to be new leadership, we’re going to have to really work diligently to connect them to the spirit and the concepts and then to try to help them in the implementation phase.”

It is possible for both Kamitsuka and Quillen to apply for the continuing positions. While neither Ambar, Ijiri, or Hawkins could share if either acting dean had submitted an application, Ambar shared her hope that both will apply.

“I hope that both [Kamitsuka and Quillen] will be in the applicant pool,” Ambar said. “I think that they’ve done really good work, and I think it’s important for us to be able to look at their candidacy in connection with other candidates. But that’s their choice, and they have to make their own decisions.”

Hawkins hopes to bring potential candidates to campus by the end of November and select a final candidate not long after.

“I don’t know what the College is up to, but for the Conservatory, we’re trying to kind of get it done before the end of the semester,” Hawkins said.

Ijiri has proposed a similar timeline for the College search.

“We’re looking for this to be sort of a fall semester [and] Winter Term project, rather than, you know, a full year course,” she said. “But a number of things are not in our control in terms of candidates’ schedules.”

Some students have noticed that neither committee includes student members. Ijiri explained that this is due to confidentiality concerns.

“This search committee for this position is different than for other committees,” Ijiri explained. “It goes back to the bylaws. It’s a faculty-elected committee, so it wasn’t an appointed committee. You might have expected a committee with a couple of faculty, a couple of students, and staff and so on — which you’ve seen in other searches. … [This was done] in order to protect the identity of the candidates; since this is a very high level position, certainly people would want protection as far as if they’re not the person who is offered this job.”

However, students who are interested in influencing the hiring process can attend a listening session this Monday at 4:30 p.m. in Wilder 115, where they will be able to voice hopes and concerns for potential candidates. Students can also reach out to Yumi Ijiri and Richard Hawkins directly via email.