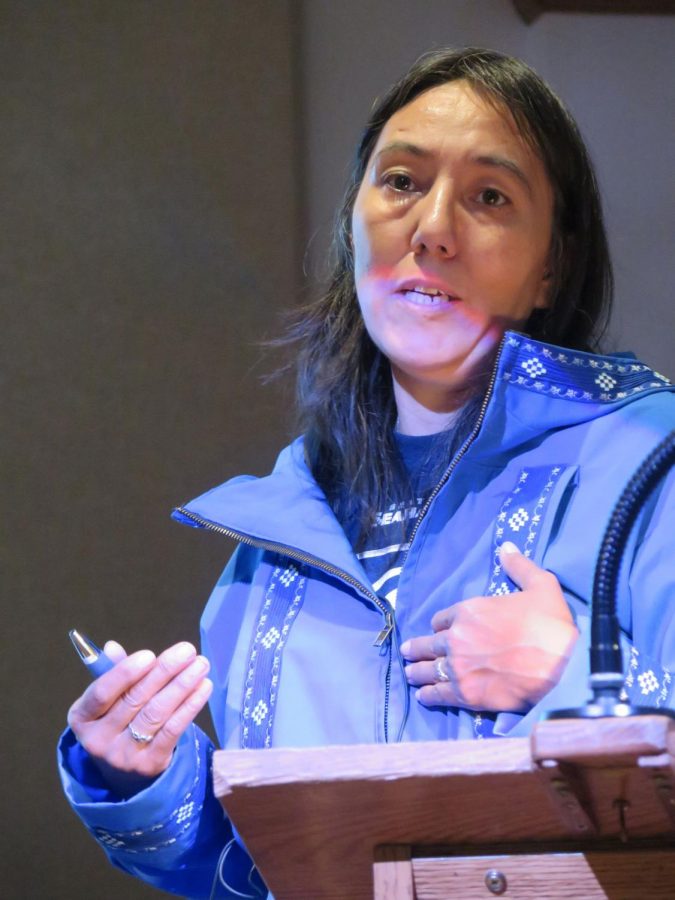 Rosemary Ahtuangaruak is an Iñupiaq environmental activist from Alaska who has collaborated with Assistant Professor of Environmental Studies Chie Sakakibara for many years. In her home village of Nuiqsut, Ahtuangaruak’s work focuses largely on addressing environmental health impacts resulting from heavy industrialization in the area, including air pollution connected to oil and gas production. She is also heavily involved in local politics, including work on education. In 2017, Oberlin College gave Ahtuangaruak an honorary doctorate in recognition of her work. This past week, Ahtuangaruak was on campus to meet with students and faculty, visit several classes to share her expertise, and deliver a public lecture. She was brought to Oberlin through the StudiOC Program, as part of a learning community called (Re)imagining Maker Cultures, co-taught by Technical Director and Lecturer of TIMARA Abby Aresty and Associate Professor of Anthropology Amy Margaris, OC ’96.

I was hoping you could start by introducing who you are and the work that you do.

My name is Rosemary Ahtuangaruak. I live in the village of Nuiqsut, AK. I’ve been working on environmental issues related to oil and gas development. Our village is next to Prudhoe Bay and the National Energy Policy Act has created a lot of change in our lands and waters — I’ve been working to address environmental health issues.

What kinds of specific issues and challenges do you work on?

Right now, we have a lot of concerns around human health issues, failure of [processes that] enforce environmental regulations, and allowing industry to self-regulate, self-monitor, and self-report. It has led to our village being exposed to 107 million pounds of nitrous oxide per year. And we’re really looking at ways to identify the health impacts related to this because politics have prevented us from doing that and putting in preventative measures that will decrease our exposures.

Over your time working on these issues, have you seen any change? Have things gotten better or worse?

In some ways, there has been progress. Industry has tried to reduce its footprint on this land. Unfortunately, their effort to develop industrial infrastructure is a piecemeal process, which increases the sprawl around our area. Developments in Prudhoe Bay have a much larger footprint than the developments in Alpine, which is closer to my village. But the reality is, both are causing impacts to our community.

There have been efforts with others to decrease the use of heavy fuels, especially in the marine environment. Unfortunately, there were exemptions in our area. We had to work further in the process to try to build those protections — we may have some success this year with the International Marine Organization, which regulates the process. We’ve also been working extensively to try to reduce the emissions related to oil and gas processes.

There are efforts to improve these processes, but the devastation — [it’s like] what happened with the Exxon Valdez oil spill, our elders knew about dispersants, that people who work with [dispersants] were some of the first ones to die. And yet in the Gulf of Mexico, the usage of dispersants was way too much, and they will not work in the Arctic. So we have much more work to do in those areas also.

Can you describe your connections to Oberlin?

I was able to work with Oberlin through [Assistant Professor of Environmental Studies] Chie Sakakibara. She had offered me an opportunity to lecture on climate change through a Skype class. I worked with my school and had our students come in and participate in the village and listen to the presentation while I talked over Skype to the students here at Oberlin.

The students at Oberlin were greatly impacted by that talk and went through a process to allow me to receive an Honorary Degree in Humanities. And that process has continued to forge connections. I worked with three different professors at this institution during this visit, and the Arctic collection with the Anthropology department allowed us to share some additional interactions with and explanation of those items and ways to continue working into the future, bringing the history alive into future educational opportunities.

When people discuss the environment and climate change, they often wonder if there is hope for the future. Do you think there is?

At this time and age, yes. … The outpouring of action among young people is astronomical — more than I could have ever anticipated. Their willingness to engage and hold decision-makers accountable is a much stronger process than what I have been able to bring, and that has created a lot of hope.

We are making tremendous change, and the willingness to try has grown. The further we get educated on these issues and learn about the laws that we need to change, we can make strides that will protect many lands, and waters, and the health of the people who live across our nation. And so there is a lot of hope.

Is there anything else that you wanted to add?

I really appreciate the work of the students who I have been able to engage with. Their work in Africatown, AL, under the leadership of [Associate Professor of Environmental Studies and Comparative American Studies] Janet Fiskio has a special place in my heart, and to see continued progress with that project is so very important. So I really appreciate that things are continuing. They are keeping the Arctic alive in their hearts and moving with goodness.