A Look Behind the Scenes: Choreographing Physical Intimacy 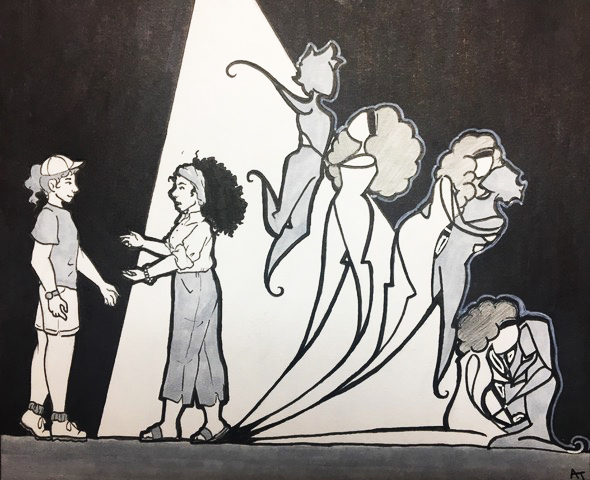 As a younger actor, I remember times when I sat across from the actor playing my romantic interest, each of us stumped by the next line in the script: “The two share a passionate kiss.”

While it’s possible to side-step around this stage direction for the first few weeks of rehearsal, the moment inevitably comes when the intimate scene must get staged. In my experience, what follows has ranged from giggling teenage awkwardness to extreme discomfort.

How do we ensure the former rather than the latter? In the Me Too era, we’re finally aware of the unbalanced power dynamics that often occur between young, usually female actors and male directors. The question is, how do we navigate those dynamics when a script calls for two actors to kiss or have sex on stage?

In the last few years, a new title has been given to theater artists who are brought in during rehearsals specifically to direct such scenes. The term is “intimacy coordinators.” They function much like choreographers, breaking down the movements in the physical encounter and ensuring that the actors are safe. This role is extremely new — the first Broadway production to make use of an intimacy coordinator opened just this past May.

On the Oberlin campus, the Theater department has long used choreographers in its productions. Now that intimacy coordinators are gaining national attention, there has been increased discourse about the role they should play at Oberlin. Professor of Theater and Africana Studies and Chair of Theater Caroline Jackson-Smith explained that intimacy coordinators are a necessity for the well-being of the Oberlin theater community.

“I know in this community that we’re all becoming so sensitive around Title IX issues about permission and respect for people’s boundaries,” Jackson-Smith said. “To have someone who can sit and talk with the actors and the director, who can offer suggestions, who has already [been] trained in what’s safe, that is huge for us in this community, in the kind of community we want to be, so there aren’t abuses of people transgressing boundaries in any way, shape, or form.”

Visiting Assistant Professor of Dance Holly Handman-Lopez, who is studying to be an intimacy coordinator, echoes Jackson-Smith’s sentiment.

“While doing this kind of coaching, and this is now in the national spotlight, it’s important that performers feel comfortable, respected, and in charge of their own bodies; how they are touching and being touched by others,” Handman-Lopez wrote in an email to the Review.

Jackson-Smith has worked with Handman-Lopez on her directorial projects in the past, and she hopes to use Handman-Lopez as an intimacy coordinator for a project she’s directing in Cleveland this spring. Jackson-Smith is an accomplished director, but she explained that she would rather have an intimacy coordinator direct scenes involving sexual intimacy.

“I’m still uncomfortable after all these years trying to stage a sexual scene and to figure out how everyone can feel safe,” Jackson-Smith said. “I mean, it really is [like] fight choreography where it really is a specialty of how you evoke what you want to evoke, but keep the actors safe [without] doing explicitly what you think you’re seeing.”

While the two jobs may seem extremely different, fight choreographers and intimacy coordinators have similar approaches to staging their respective scenes. A fight choreographer breaks the fight down into “beats,” much like a dance routine. Each movement is specifically chosen to make the scene look like a fight from the audience, although the actors are not actually hitting each other. Intimacy coordinators can use choreography and the power of suggestion to achieve the same effect.

Cat Potts, OC ’19, who majored in Theater, explains that when she assistant directed Bright Half Life, she tried to block the kissing scenes as carefully as possible.

“[The director] has to be so careful because there are always power dynamics at play, and those can be taken advantage of super, super easily,” Potts said. “It’s got to be so spot on, because if you don’t have those very specific directions given, how is a person who feels violated supposed to speak up? So if two actors are kissing and, you know, one actor starts to shove their tongue up the other actor’s mouth … for me as a woman, that would be like, ‘Okay well I … feel uncomfortable speaking up, because maybe I’m just being sensitive.’”

This job doesn’t just ensure the safety of the cast — it also makes for better art. The clearer the directions are, the more comfortable the actors are fully committing to the moment, which makes for a better scene.

“You don’t want [the scene] to be weak and tepid because you’re kind of afraid or don’t know enough about how to have people engage safely,” Jackson-Smith said. “So if there’s somebody who’s good at [staging intimacy], it’s going to be better for everyone all the way around.”

There are times when the rehearsal room does not reach this ideal. Potts spoke about her experience performing a sex scene for a faculty-directed production. While she felt that the students were good at setting boundaries for themselves, she wished that the director would have approached the scene more carefully.

“[The conversations] need to be facilitated by the adult in the room, the faculty member, the director, and … either you two or all three [of us should] have this conversation, ‘What are you comfortable with? What’s uncomfortable? What’s your tap out? What’s too much, and how can you express that?’” Potts said.

“The first play that I did here was Chamber Play,” Rejto said in an email to the Review. “There were scenes that involved sexual assault that became rather uncomfortable to choreograph mostly because we were left to our devices (despite our director’s best efforts to guide us). I was incredibly anxious about making choices that were ‘too real’ and causing my acting partner discomfort. And on top of that, I was just a first year who only realized the content of the play after accepting the role and felt obligated not to take issue with the process.”

Carrie Babigian, a fourth-year Theater and History major interested in directing, shares this concern. As an assistant director in Heathers, she found it difficult to stage a sex scene, because she had not been taught how to choreograph intimacy.

“I think in professional theater there are definitely freelance … intimacy and violence [choreographers], and then there’ll be a separate person as a director,” Babigian said. “But it is interesting to think about, because in student theater, you don’t have those resources. [Hiring an intimacy coordinator] is just not going to happen.”

It’s important to remember that the conversation around intimacy coordinators is extremely new, and, though there are still improvements to be made, I’m grateful that there are Oberlin professors who are raising the standard for directing intimate scenes.

Last semester, a student worked as an intimacy coordinator on Oberlin’s production of What We Look Like, and Handman-Lopez has been interested in this work for years.

“Oberlin directors are ahead of the curve as they have been reaching out for assistance in this way for years,” Handman-Lopez said.

Potts hopes that the department increases the use of intimacy coordinators in the future.

“But as far as the department goes, I just want them to keep pushing and keep learning and keep growing,” Potts said.

In my own acting experience, the presence of an intimacy coordinator would have created a third outcome other than the two I mentioned earlier: not slightly awkward nor dangerously uncomfortable, but secure, professional, and, most importantly, safe.