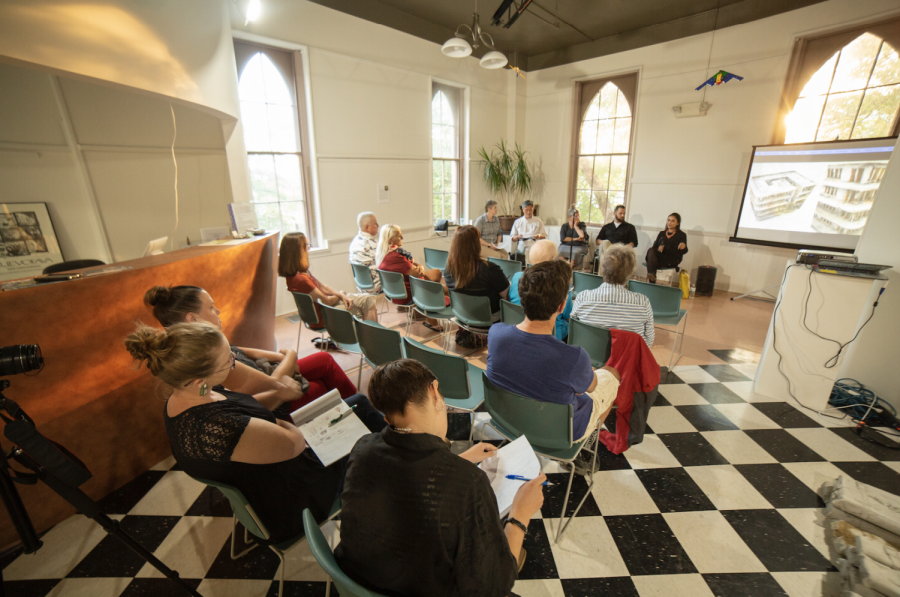 Attendees at the FAVA gallery panel this Wednesday. The panel was part of the “E. Pluibus” exhibition, which will continue through Sunday.

Walking into the Firelands Association for Visual Arts gallery for a panel focusing on the 18th anniversary of 9/11, I expected tense silence. Instead, I was met with excited conversation and laughter between an intimate audience and the panelists. The mood didn’t match the somber nature of the day, but I sensed that this would inspire the crowd to continue the conversation after the event.

The panel concluded the FAVA’s “E. Pluribus” exhibition, a collection of artworks depicting war from a diverse range of American and Middle Eastern perspectives. The panelists were also diverse: their personal backgrounds ranged from working in the Pentagon at the time of the attack, to fighting for the U.S. in the war in Iraq, to living in Pakistan during drone strikes. Though the members spoke about drastically different experiences, they were united in their final message to the audience: the conversation around global conflict needs to continue.

Currently, the “E. Pluribus” exhibition includes the works of 10 additional artists, spanning interactive installation pieces to live performances. Because most of the collection is in the process of moving to a new location, the FAVA gallery is currently showing the works of only Matthew Diebel and Mahwish Chrishty, two of the panelists. These pieces will still be available to view until Sept. 15.

Barbara Koenen, the creator of “E. Pluribus,” began making art about war after she realized that both the media and the government were disregarding the nationwide marches against the war in Iraq.

“It was a straightforward decision,” she said. “How could you not address [the attacks, the protests, and the war]?”

Her pieces, based on Afghan war rugs and Tibetan sand mandalas, eventually became part of the “E. Pluribus” collection, which Koenen began curating in 2016. To counter government and media censorship, Koenen used the collection to record history, depict the complexity of the crisis, and spread awareness as the exhibition traveled around the country.

Last Wednesday’s panel educated the audience in a similarly nuanced way. Each of the panelists shared sobering experiences of violence and explained the importance of the exhibition, but the bulk of the conversation centered around defining the larger forces at play in the conflicts in the Middle East and Central Asia. The panel was eager to describe the complexity and vastness of the problems affecting international relations, but it struggled to recommend many concrete solutions.

Deibel, an Iraq war veteran, said that though the conflicts show few signs of ending, the question of withdrawing troops presents an acute moral dilemma.

“[Marines] don’t know what to do,” he said. “From our experience on the ground … [it seemed like] most of the Iraqis appreciated us being there.” Deibel said that the U.S. military provided medical care and running water to civilians who hadn’t previously had access to either. While the military had helped to keep citizens alive for the time being, the lack of public awareness left the situation without a long term resolution.

“We had despotic leaders like Saddam Hussein doing atrocious things to their people, and this was largely not talked about in the media,” he said. According to Deibel, these problems are still relevant as long as the U.S. military remains active in Iraq.

Mahwish Chishty, a Pakistani-American artist and Professor of Art at the University of Massachusetts Amherst, added that she hadn’t been able to find enough information about the U.S. drone strikes on Pakistan in the states; she only found the answers she needed at the Bureau of Investigative Journalism in London.

“We [the U.S.] have multiple news channels … but we’re not getting what we are seeking,” she said. Chishty lamented the fact that U.S. taxpayers were funding the CIA’s attacks on Pakistan without having enough resources to fully understand the situation.

But a lack of publicly accessible information may not be the only issue. Oberlin Visiting Instructor of History Jiyul Kim, who worked at the Pentagon, said that the panel’s small turnout reflected the average American’s apathy for current events in the Middle East and Central Asia.

“It’s become normal, for [current Oberlin students]; you can’t remember a time when we weren’t fighting in Afghanistan and Iraq,” he said. Kim also suggests that the recent lack of U.S. casualties in these two countries contribute to the lack of press coverage and national interest.

The decrease in student activism on the issue is easy to see. Following the attack on the Pentagon and the World Trade Center in 2001, Oberlin students responded with blood drives, weekly demonstrations, new classes, documentary screenings, forums, panels, and fasts to raise funds for the survivors in New York and D.C. Now, although we have a fuller knowledge of the complexity of the crises in the Middle East, we are taking less action. At the panel, I noticed that the only students that had come were myself and a photographer. It seems like this is an issue which is in danger of being forgotten.