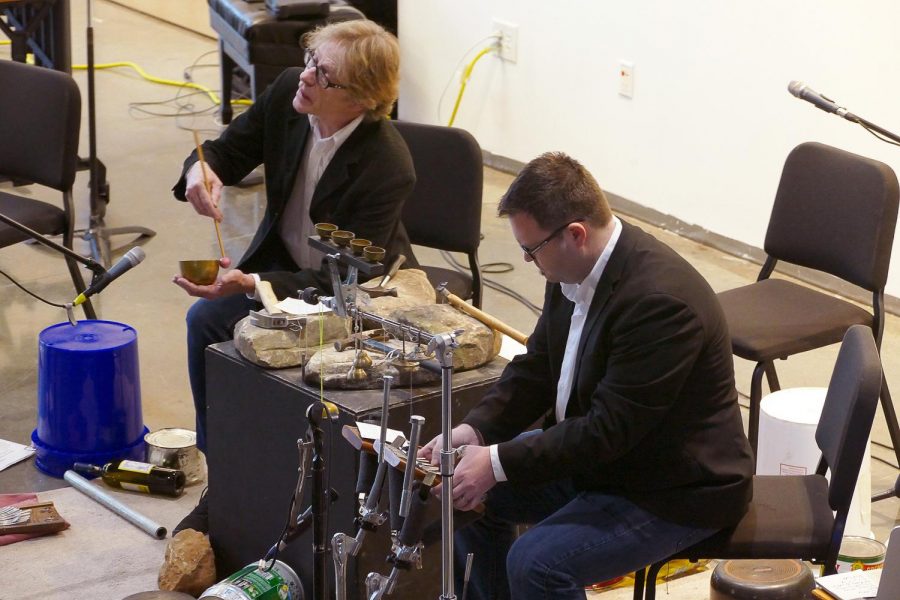 Objects like rocks, pots, pans, and trash cans may not sound like typical musical instruments, but they are artfully used to produce The Innocents, a percussionist exhibit that will be performed this Sunday, Sept. 15. Percussionist John Lane and Allen Otte, OC ’72, created The Innocents to address issues of wrongful imprisonment, the American criminal justice system, and exoneration. This is one of many projects, including several at Oberlin, that advocate for prison reform through artistic means.

In The Innocents, the duo uses found objects to produce artistic soundscapes that weave in the voices of incarcerated people.

“We made a conscious decision early on that we didn’t want to include any traditional instruments,” Lane wrote in an email to the Review. “We’ve even found that some of the choices we’ve made in that regard have psychological underpinnings.” Although the cardboard boxes, tin cans, pipes, and newspapers were originally chosen for their sound, Lane explained that these nontraditional instruments also allude to poverty.

“Many individuals who get swept up in wrongful imprisonment often also struggle with poverty or homelessness,” John said.

The duo also chose sounds which deliberately reference incarceration, such as rocks smashing together from a recording of a chain gang, which is a group of prisoners chained together as punishment.

“In performance, we have the opportunity to direct and focus not only attention but, more importantly, to engage on an emotional level where experience is more than simply processing facts and figures,” read the program notes.

Some pieces are purposefully uncomfortable, and at times confusing, while others are more direct. According to the program, this is done to prove the value of “empathic engagement with issues that ultimately touch all of our lives.”

The project was conceived as a performance art piece in collaboration with University of Cincinnati Professor of Theatre Michael Burnham, along with actors from the Cincinnati College-Conservatory of Music drama program. It coincided with a photography exhibition, The Innocents, by Taryn Simmons, which was comprised of photographs and interviews with wrongfully incarcerated people.

The Innocents fits into a larger conversation about prison reform in the Oberlin College arts community. There are a variety of programs at Oberlin that also explore and support creativity in prison.

“Research indicates that men who participate in educational experiences have a lower rate of recidivism,” said Professor of Music Education and founder of Oberlin Music at Grafton Jody Kerchner, referring to the decreased likelihood to be incarcerated again. “My research also suggests that men participating in choir also learn to follow directions, receive feedback from the director, an ‘authority,’ take risks by showing others their inner selves, deal with and reframe their feelings, and practice positive internal attributes such as patience, confidence, motivation for doing one’s best, and allowing oneself to enjoy oneself during the process of learning.”

Kerchner’s service-oriented organization at Grafton Reintegration Center aims “to provide an opportunity for residents to engage in community-building, cooperative group learning, discipline, enhanced self-esteem building, healing, and self-expression through music.” She has extensively researched this topic throughout her career.

Another program, Oberlin Drama at Grafton, offers residents the opportunity to perform classical drama, with an emphasis on Shakespeare’s plays.

The website states that, “As Grafton men bring to life characters grappling with profound social problems using brilliant language in complex ethical situations, they gain deep insights into society, themselves, and other individuals.”

Students and organizers work with residents on performances such as Merchant of Venice, which was performed last May. Zoe Jasper, College third-year and Assistant Director of ODAG, also touched upon the importance of the program. She has been part of the program for a year, attending production meetings and rehearsals, as well as working with actors in groups or one-on-one to refine their performances.

“This program is deeply important to me because it provides an opportunity for people in the free world to connect with incarcerated men and make prison just a little more bearable for them,” she wrote in her email to the Review.

Come see The Innocents this Sunday and witness the power of arts to empower those behind bars. For those interested in getting involved in Grafton’s programs, contact Jody Kerchner for OMAG, and Emeritus Professor of English Phyllis Gorfain for ODAG.