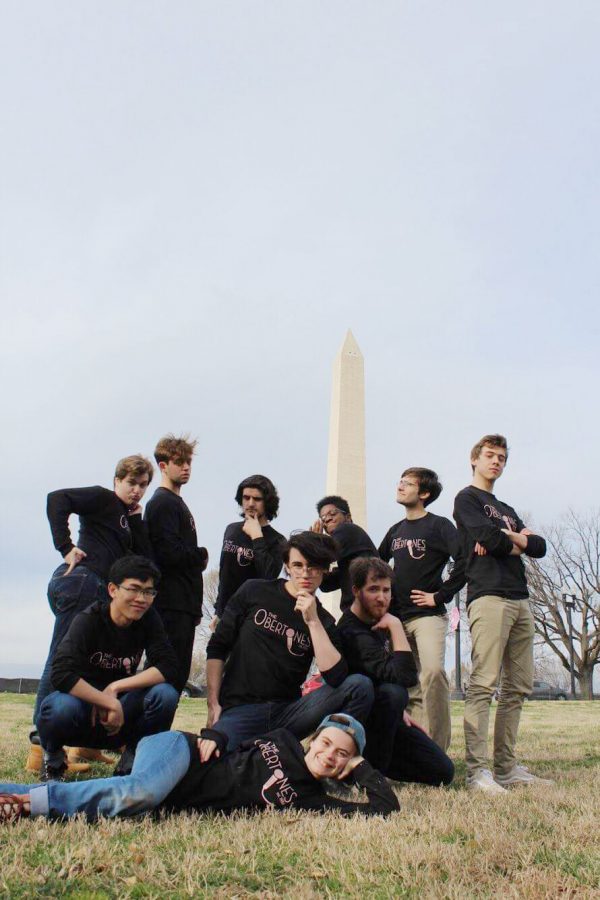 Double-degree fourth-year Maxwell Addae and College third-year Barnaby Woods are the respective music director and president of the Obertones, Oberlin’s premier a cappella group for people who identify with the experience of manhood. This summer, the group released their first single, “Dream On,” which Addae arranged during his first year at Oberlin. They discussed the single, last year’s iteration of their annual spring tour, their legacy as a group on campus, and their goals within the Oberlin community and the world.

Could you guys tell me briefly about the process of making and releasing the single?

Maxwell Addae: During Commencement week, we were here for the Commencement a capella concert. So I basically had each of the 12 members of the group come into the Conservatory basement one by one and recorded them on their own individual tracks. Then, I spent a bit of time over the summer editing, fixing, tuning, stuff like that. And then, [I] sent [the tracks] off to a professional a cappella mixer at the end of June so that they could handle the mixing process. They got it back to me in mid-July, and then we put it out July 19. … The Obertones have recorded before, but not this group of singers. It’s our first studio single.

Have you encountered any problems or difficulties during the process of making it?

MA: The main issue on my end was doing it all within a very compact time period. It’s very time-consuming to record every single person on their own track, and so doing all of that in four days was very tiring. But other than that, it was a pretty smooth process. Everyone knew the song pretty well at that point because we had been doing it for the past two or three years. It was one of our oldest arrangements. Part of doing it too was it was a tribute to one of our graduating seniors. He was on the solo for that song. It was a way to honor him and give him tribute as he graduated.

This song is one that you guys already had rehearsed?

MA: I arranged it my [first] year — so like 2016 — and it’s been around for a very long time. I’ve gotten pretty sick of it after a point, and I was like, “You know what? Let’s record it and get it out there. And just be done with it.”

Barnaby Woods: [The recording] definitely breathed new life into [the song], hearing the studio version of it.

Now that the song has been released, how do you feel about the effect?

BW: Well, for me at least, I just love being able to listen to a studio version of one of our arrangements. … And also, you know, this has been something that I sent to all of my friends and family, all of my social circles, everyone possible, because this is mixed studio single, but it still sounds like us, you know? At its core, you can still pick out all the voices of the members in the group. And because of that, I’ve just like sent it everywhere — people have been really, really enthusiastically responsive, and it’s just been an absolute honor.

MA: Totally agree. I think one of our major goals for the group too is to really expand our work beyond the Oberlin campus and get our name out beyond Oberlin. So I think having the single out is really helpful to … get our brand out of [just] the Oberlin circle.

Let’s talk about your tour during spring break. Could you briefly describe it?

BW: We went to four different places. We started out in Washington, D.C., and there on our first night we hosted a concert at the Lyceum [Museum] in Alexandria, VA. And that was a huge success. … And then the next day we performed in the Cherry Blossom Festival, which is down in D.C. close to the National Mall. So that was also an incredible experience … We just had people passing by and like stopping and listening to us. And that was pretty awesome.

And then [we stopped] in New Jersey. Obertones member Patrick Wai is from there, and we stayed at his house. He coordinated everything with his high school, and we went in and did multiple workshops with [students there]. We stayed in New Jersey for about three days. After that, we moved on to New York and did some busking on the Highline, and we met with a whole bunch of Obertones alumni, like 40 to 50 alumni. We did this huge concert in the Jewish Community Center in Manhattan. You know, it was totally sold out, and it was a lot of fun because we went up and did our set and then the alumni joined us. It was like this ridiculous a cappella group of 60 people singing the Backstreet Boys medley.

What do you think is the key to The Obertones’ success?

BW: Obviously, we owe a huge part of that to our history. The Obertones were the first a cappella group on campus, since then they kind of owned that role. The precedent has been set for many years now to just kind of grab as many gigs as we possibly can and perform a lot.

I think we have just been very lucky, largely. I feel like since getting here, I’ve just been very lucky that there was already a very solid foundation to work with. Really, that’s a huge thing. We also just have a ton of energy, which I think is a big thing. You know, we all love performing and running around and moving while we’re performing. I think people respond to that.

MA: And also, I don’t want to paint this picture of us being like the perfect group; there’s definitely been some low moments, both in recent years as well as in the ’90s. … There have been moments where the group has not been a great place. But I do think it is a good environment now. … I think the people in the group are very conscious of [being a group of members who identify with manhood] and are really trying to make it a space that is musically inclined and musically intentional, but also socially intentional and really trying to be aware of how our actions affect the broader Oberlin [community].

And just to add to Barnaby’s point about the history of the group, in addition to the musical side of things, the language around how we present ourselves has changed a lot. Previously it’s been an all-male group, which has connotations that are complicated. So we’re transitioning more into this language of identifying with “manhood,” whether that be cisgender man or trans man or non-binary but still aligned with manhood. So I think that kind of opens the door for more people to feel okay in that space and feel not as pushed out by the all-male dominance that there once was.

What is the biggest thing that you learned from the experience of being a member of the group?

BW: That I can be friends with a big group of men. I’m being serious. Like, that is not something I experienced before that group, and it’s been really important for me.

BW: Also, musically, so much — The Obertones kind of opened the door for me to start arranging music. … And that has been an absolutely invaluable skill that I’ve learned from being in The Obertones. … Over time, I started doing my own arrangements and learning how to develop my own musical voice and how to take a preexisting song and turn it into something that is for The Obertones.

MA: I’m going to latch onto the being in an all-men space thing for a second, [because] that is so real. In my high school, there were very few openly gay men. They were very few spaces where I felt like I could be myself as a man. In The Obertones, it’s a very different space: super welcoming. Everyone is just pretty gay, first of all, but also just unafraid to be themselves and and to be there for people and to cry and to just embrace emotion, you know? It’s a very different space that I have not encountered outside in most predominantly male spaces.

Is there anything that you guys want to improve as a group?

BW: Personally, I like the direction we’re heading in. I think our progression since I have been in the group has felt very natural. I’ve been lucky enough to kind of stick with the same general group of people moving up every year, and every year I have seen that group of people grow.

MA: I think another goal for the group that I want to instill is being consciously aware of what an all-men’s space can be and what we should try to make it not be — just being very conscious that as an all-men’s space, we need to have certain things in mind and craft the environment in a way that is healthy rather than toxic. As an all-men’s group, we have to be super consciously aware of how our actions affect the wider community and promote an environment that produces people that we can be proud of.