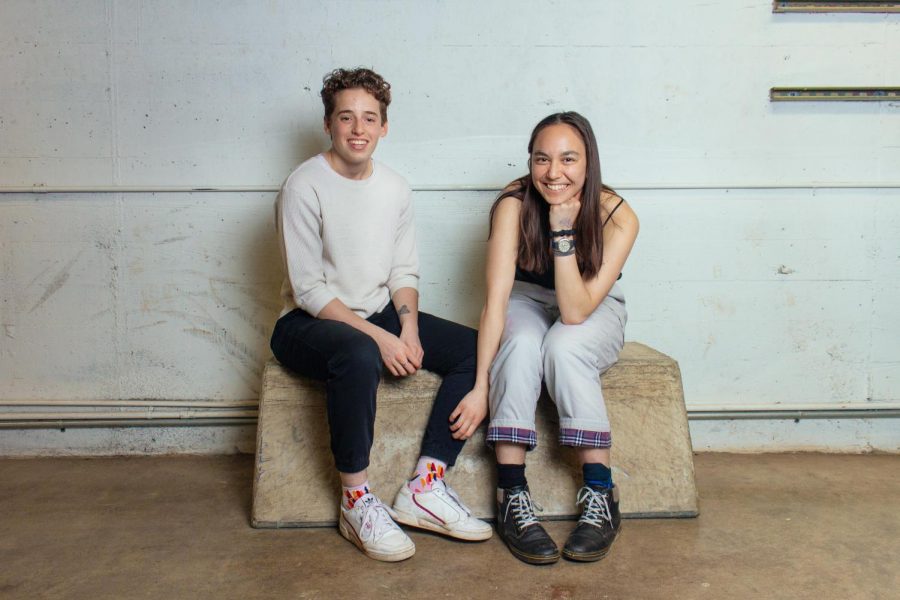 Varsity basketball player Leo Ross and varsity soccer player Bethany Gen, both College third-years, have been dating for the past ten months. The two athletes met while working as Preventing and Responding to Sexual Misconduct trainers, a program designed to educate students on combating gender-based discrimination and sexual violence. Throughout their relationship, they have navigated their position as queer Oberlin students, with the added layer of being queer varsity athletes. Their relationship has illuminated the heteronormative culture that exists generally in athletics.

How did you two meet?

Leo Ross: We both were PRSM trainers, so we first met during PRSM. And, well … I don’t want to expose her, so it’s your turn.

Bethany Gen: Um, let’s just say, I didn’t know I was queer until I realized I liked Leo.

Did you know each other from athletics before that?

BG: I knew of Leo because they were organizing and in charge of the Stronger Together stuff, which was required for all athletes. So I saw them in front of a crowd there.

LR: The basketball team did game management for the soccer team, so I knew of Beth because I saw her starting for the team as a first-year and I was like, “Whoa, that’s [wild]!”

What kind of role, if any, does athletics play in your relationship?

LR: I think, being two athletes, we share a lot of the same values. We both like being active and doing athletic things and supporting each other in those endeavors. And I think that’s a nice thing to have. It definitely is really helpful regarding time commitment. Since my season’s so long and we’re in the gym all the time, having somebody that understands that is important.

At Oberlin, it seems that athletics has a reputation of being the “straight” part of Oberlin, which is unusual, I think. Based on your experiences, do you think that that’s true?

LR: Yes, but I think a lot more of us are queer than people realize. I just see differences in culture. We are queer people in a straight, cis-gendered culture. Oberlin is like queer culture and [non-queer people] are just existing in that culture, you know. But I think in athletics, it’s vice versa.

What have your experiences been like as out queer athletes at Oberlin? Do you get a lot of support from your teammates, trainers, coaches, etc?

LR: Well, my former coach was horrendous. I think I didn’t communicate how I should have, but I did make some suggestions. When someone offers you a breath mint, you take it, right? And the same way, I offered him different resources on how to do pronouns and stuff like that and he didn’t take it. He didn’t use my pronouns once all year for an entire season, and then asked why I wasn’t playing as well. I told him that I kinda broke down a little bit and said I was having trouble with identity, and that it was really hard. But it didn’t change anything with him. I don’t think his intentions were bad. I just think he was really out of his comfort zone and didn’t step up. But the new coaching staff has been excellent, they’ve really been great.

My teammates have been really open to learning. The training staff have been really good, and again, I think there’s a joint understanding that we’re getting there and we’re learning, and that’s really all I ask of people is that you learn and you try on the pronouns and gender stuff. But you know, I’ve had my shirt off after I had top surgery in the training room and I’ve had all three trainers working on my chest for scarring and you know, people have been really surprisingly good about stuff like that.

BG: I think my team has been very supportive of me, which is really amazing and impressive. I don’t know if my coaches know, but the training staff have seen Leo and I in the training room together and … I don’t think we’re all that subtle and they don’t really bat an eye, so I can’t really ask for more than that.

BG: I spent a lot of time last year learning how basketball works.

LR: I initially associated soccer with game management, which would mean that you all would punt the ball out of bounds and I would have to go chase the ball down in the stands the whole game.

BG: I used to think basketball was boring but then I started learning how it works and then it got more interesting. And I obviously like watching Leo play.

What would you want people to know about the intersection between being queer, or being in queer relationships, and athletics at Oberlin?

LR: What really comes to mind is, I don’t really go out anymore with athletes because I get deadnamed and misgendered. I can exist in spaces, but sometimes I feel like I can’t be myself in spaces. I can’t make trans jokes … sometimes you make jokes and people are so rigid in their gender conformity, so some athletes just kind of look at you and don’t really know what to say. So I find it really hard to sometimes exist as the trans person that I want to be. But that isn’t to say that individual people don’t try, and I want to be very clear about that. There are people who are trying and they do a really good job. But as a community, there doesn’t seem to be a collective effort.

BG: It’s kind of interesting because I have the experience of thinking that I fit in with the super heteronormative culture of the athletic community, but then I realized that I am outside of that. And sometimes you just don’t feel like the space is for you.

What are ways that people in athletics have or can help make things better for queer people in these spaces?

LR: I think letting queer culture permeate a little bit through athletics and recognizing that doesn’t make you queer, it just makes makes you a part of the greater community and engaging with the culture. I had this one experience where I watched someone on a men’s team be able to fully express himself at Queer Beers, but not at [his] team’s party, and that just seemed so ridiculous to me. So there needs to be recognition that you can engage with queer culture and be straight and have a good time. I think some athletes have a hard time with that. I will say that people do a good job of recognizing when I tell them that the culture is really cis[gendered], but they just don’t do anything about it. It’s nice to know people know that it’s happening but at the same time, for them to know that it’s happening and to recognize the sacrifices I have to make to go out and be a part of the team, and then not doing anything to try and change it can be frustrating. It is on the athletic community to make this a place where queer and trans people can exist.

BG: I think part of that could be just thinking about everyday language that’s used during training sessions in the locker room and stuff. Like, “Let’s go ladies” is a perfect example. We can just easily cut that out and say “let’s go Yeo” or something like that instead. And I think you were talking about how the Review changed the wording from “female athletes” to “people on women’s teams,” which is great. These are easy changes to make that would make it at least a little bit more inclusive from my perspective.

LR: Statistically speaking, there are queer people on the men’s side of athletics. I say that because that speaks more to the culture that they feel like they can’t be out. To be very clear, they should do whatever they need to do to feel comfortable. They don’t need to come out and you can stay wherever they needed to say and do whatever they need to do, you know, to feel safe and comfortable on a team. But the men’s side of athletics need to take a really good look at the culture that they have and see that it’s a really big problem if they have no out queer athletes [while] the women’s side does. I mean, this isn’t going anywhere, queer people aren’t going anywhere.

BG: I think it’s interesting also that I had to go outside of athletics to get queer culture. If I had stayed solely in that community, I wouldn’t have been exposed to queer culture and realized that I was a part of it. I had to leave the athletic community and culture to find it and then try to bring it back. And I hope a lot more people are also doing that.

What are successful steps that your teams have taken to try to make spaces more inclusive? Should these be things that other teams try to do as well?

LR: You know, we go to Queer Beers, and that’s seen as pretty normal on our team. You don’t really have to be queer, everyone’s welcome. And I’m doing a gender workshop that just gives all the basics and people seem really excited about that. There is an effort to learn, which I really appreciate. I think the route we tend to go to is queerness as normal, which I think is one method of many, but it can be really helpful for people. I am really proud of the basketball team in the way that we communicate about queer culture on the team, and I think we do a good job.

BG: I think we have a lot of queer leaders on the soccer team this year, and I’ve been really excited and impressed with the way that we’ve all stepped up and been outspoken and willing to communicate that this is a culture we need to create. And everyone on the team seems very receptive of this and also really excited to learn new things and talk through things, so I’m really excited for future years and the rest of the season.

LR: One last thing we think is really important for people to understand, but has less to do with athletics, is that when you step off the campus, the rules change. And so if we want to go on a cool adventure together, we have to plan it out. I think a lot of the anxiety that comes from leaving the campus is the ambiguity over whether we pass as straight or not. And I think what makes it harder is my gender. It’s always in flux. I don’t know if people think we’re just like really close gay best friends, or I don’t know. We have to plan out scenarios and make sure we’re safe and take precautions that might seem unnecessary to straight people. We’ve had a couple incidents that were a bit scary.

BG: We had someone come up from behind us at night and we had just leaned over to kiss each other, and he made a really weird comment about it and just kept going. I don’t know if he thought he was just making fun of a young straight couple or if he was being homophobic. I have no idea.

LR: After he passed, I made a point to pull off the sidewalk and make sure we had enough distance. There was definitely an emotional moment and we were apologizing to each other because we had forgotten where we were and we forgot we couldn’t really be ourselves. So yeah, that isn’t as related to athletics, but we just want people to be aware that it’s not necessarily safe outside of campus for queer athletes or other queer people here.