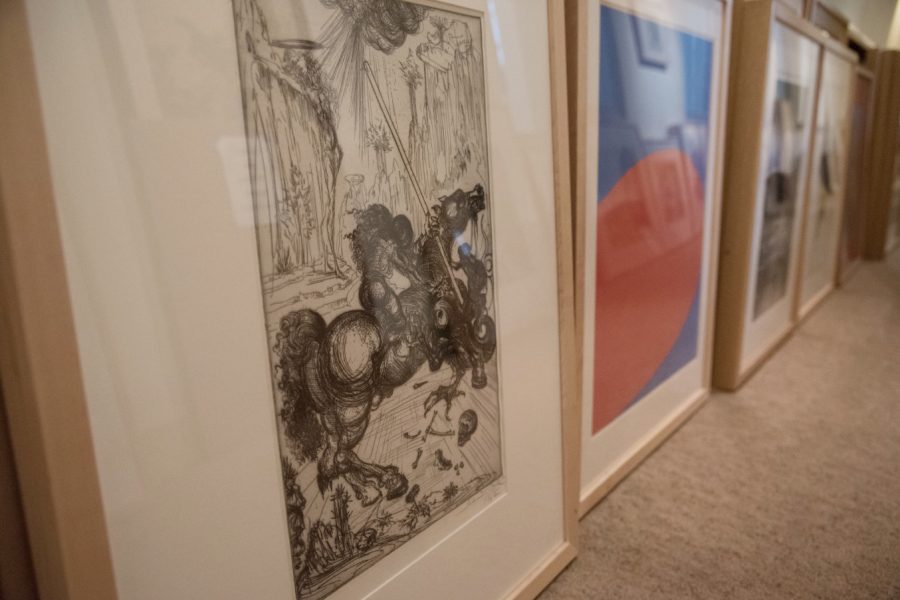 Courtesy of the Office of Communications

Works of art are lined up before students arrive to rent them for the semester.

A crowd of over 340 students lined up outside the Allen Memorial Art Museum last Saturday to participate in this semester’s Art Rental Program. For only $5, students were able to rent pieces of art from the museum’s collection, an event that College paraphernalia has boasted since 1940.

However, as College fourth-year and chair of the newly-formed Art Student Committee Jacey Davidson explained, Art Rental is not always easy to navigate.

“As someone who has participated in it for a long time, it’s been really hard,” Davidson said. “It’s not an easy process to participate in, or it hasn’t been in the past. It’s been pretty disorganized and oddly elitist.”

Davidson, along with her peers who also serve on the ASC, are attempting to change this experience by making the process more accessible and democratic. One of the ASC’s goals is to engage more of the Oberlin community.

Molly Bryson, another College fourth-year on the ASC, noted that, “Mission statements [of ASC] have been to enforce better communication and values of community between the Art department, the larger Oberlin social scene, and the museum — to connect all of those.”

Efforts made to increase interest and connection worked well this past weekend, as there were a total of 340 people on the Art Rental list — significantly more than the average 250 or so.

“It was a fun experience, and interesting to think about not only what art I liked but also what would fit well in my space,” College third-year Emory McCool wrote in an email to the Review. McCool tried art rental for the first time because of the greater transparency of the process.

Davidson, who posted the list early Friday morning, was “astounded by the number of people that showed up.”

“I came at 7 a.m. to put [the list] up … and there were [already] 100 people waiting,” she said. Unfortunately, with only 381 pieces available in the museum’s Art Rental collection, and students allowed to rent up to two pieces each, they quickly ran out.

As the Art Rental Program continues, the question of who gets to be involved and who gets priority remains.

“It has always been a complicated thing because the whole point of Art Rental is a practice in the democratization of art,” Bryson said. “Both in the fact that the museum is giving away these million-dollar pieces to students and also in the fact that the list is totally student-run.”

While ASC’s work to increase access to the event was successful, there are still many flaws that the committee members hope to address in the future.

“Even though we were trying hard to be democratic and accessible … it could still be interpreted as a group of Art students [undergoing] this process for themselves,” Bryson said. “I don’t think that’s ever what it was intended to be. I think there is a real conversation to be had about who has