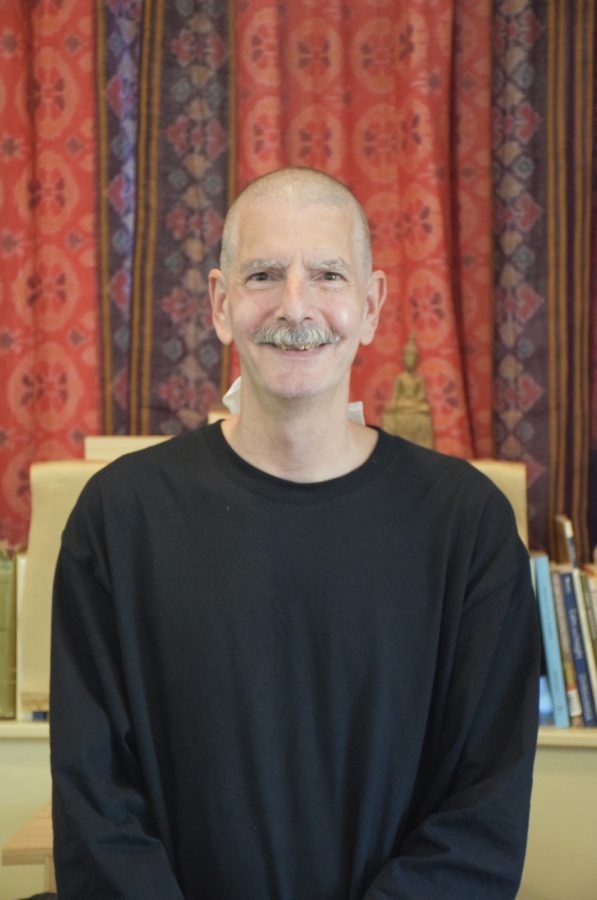 Jacques Rutzky is the Buddhist Affiliate to the Office of Religious and Spiritual Life at Oberlin or ORSL. A student of Thai Meditation Master V.R. Dhiravamsa, he leads multiple Vipassana meditation groups on campus every weekend, including an intensive Winter Term retreat in January. Rutzky worked in California for twenty-five years as a psychotherapist for adults suffering from childhood trauma. He retired at Oberlin, where he has taken on many roles, including owning a woodshop dedicated to creating Japanese Tansu. While a student, he has been credited with creating co-op pizza night.

What is your relationship to the college?

I am the Buddhist Affiliate to the Office of Religious and Spiritual Life, and as such, I make myself available to two student groups. They’ve asked me to be their meditation teacher. One is the Oberlin meditators, they meet at 11 a.m. on Saturdays. On Sundays, the Oberlin Buddhist fellowship [meets] at 11 a.m. as well. The difference is the Saturday group is more secular, so if people have a non-Buddhist religion that they follow, it’s no problem. Many students are interested in meditation for all sorts of reasons — stress, anxiety, depression, tension. … The Oberlin Buddhist fellowship [is] mixing more Buddhism into the meditation practice as well as reading from contemporary Buddhist teachers. There’s a little bit more sharing in that group; it’s a little more social. And on Sundays at 1 p.m., a group started up about five years ago at the request of a saxophone player in the jazz department. He was a meditator and wondered whether meditation could help his improvisation. … Hopefully [on] Oct. 5 this year, I’ll be starting a group on Saturdays from 1–2 p.m. for faculty. I’m also available during the week for consultation to students, faculty, and townspeople who meditate to help them work through their difficulties in the meditation practice and to transfer the benefits of meditation into daily life.

I’ve been leading the meditation groups for I think six or seven years, and I’ve been in Oberlin for about eight. I was a student in 1973. I was studying Chinese in order to read Zen poetry in [its] original [language]. Later, I had retired for health reasons, and I was looking for a quiet place to retire. Oberlin came into my mind. When we moved here, it just felt right.

How did you get involved with meditation on campus?

One day, maybe it was the fourth year I was in my woodshop [when] a student came in just to see what I had made. He was very curious, and something about the pieces stirred something in him. And then he noticed that I had a picture of a Zen monk that was carved out of wood on the wall. And he said, “Are you a Buddhist?” And I said, “Well the simple answer to that is yes.” And he said, “Can we talk about meditation?” And we did, for two hours. And he said, “Well, we fired our meditation teacher last week. Would you be willing to come and lead a session, and we’ll decide whether or not it’s a good match?”… I’ve been there for the last six years.

Do you have to believe in all of it to benefit from the practice?

It isn’t necessary to believe any of it. I was asked to be on a panel last week about death and dying, and one of the people on the panel asked me, “As the Buddhist affiliate, do you believe in reincarnation?” And I said I neither believe in it nor disbelieve in it. I said I don’t remember. And so, I find living my life is a whole lot easier if I don’t carry a lot of beliefs and opinions around.

What does meditation mean to you?

To me, it is the center of my existence. It started out as something exotic and obscure when I was young. I was interested in meditation as a fifteen-year-old, because like most teenagers I was suffering. I was depressed, I didn’t have a sense of where I fit in the world. I hoped that this would be a path towards that. I started out meditating in the transcendental meditation tradition. … When I came to Oberlin as a student, my roommate was also a meditator. … And then the summer after I left, he said, “Oh, there’s a meditation retreat being given by Joseph Goldstein.” … And so I attended that retreat with him and one other Oberlin student, and I had decided to go to Los Angeles to follow my Tai Chi teacher there. I did that for about six months, and then realized that meditation was drawing me more. So I, in a very dramatic way, made a decision to fly to Thailand and become a monk. I was really dedicated. I was looking for something to dedicate myself to.

About a month later after I made the decision — I got a flyer in the mail. … It was advertising that a Thai meditation master was giving a month-long retreat in Connecticut that fall. … So I wrote them a letter — there were only letters back then, not email — and I said, “Do you have a cook?” because I had learned to cook at Harkness.

One of the specialties of my cooking at Harkness, because I had a summer job at a pizzeria, was making pizza. And so in 1973, every Friday I would make dozens and dozens of pizzas. And we would walk out in aprons with towels wrapped over our arms and holding the pizza — that became a very popular thing. I think it’s still a thing to this day.

I guess so. I can’t take credit for that. But it was the first time pizza was made at Harkness.

Did the retreat take you in?

They wrote back and [asked], “Do we need a cook?” And having been at a retreat, I knew how important the cooks were. I wrote back and said, “Oh, absolutely.” Next to the teacher, the cook is the most important thing because so much focus is placed on food when you’re eating less of it, and when there isn’t any entertainment or sense of pleasure you can have in the middle of the wilderness.

What is something you think people should know about meditation and your practices?

The meditation practice is called Vipassana. The prefix “vi” means “something that rises up,” and “passana” comes from the verb that means “to see.” So, it’s the arising of seeing. So we train our minds not to get carried away, but to be present and attentive to whatever rises up in the body or the mind. And as the distractions begin to lessen, we see things for what they are. A thought is a thought, regardless of the content. An idea is an idea. A feeling is a feeling. A judgment is a judgment. It’s not necessarily reality; it’s what the mind creates in order to form a coherent sense of worldview.

When I started meditating, I thought that sitting meditation was the only time to be aware. And it took years and years to practice to be able to apply it to the rest of life. One student asked me, “How many hours do you meditate a day?” I said, “Sometimes I sit one hour. Sometimes three. If it’s [during] the summer, I may sit six hours.” But if the question is “How much do I meditate?” it’s the moment until I wake up until the moment I fall asleep at night. Every moment I’m applying this practice to whatever it is I’m doing, whether it’s walking down the stairs, making dinner, this is the center of my existence. They support each other — the attention to daily life and the attention while sitting in meditation.