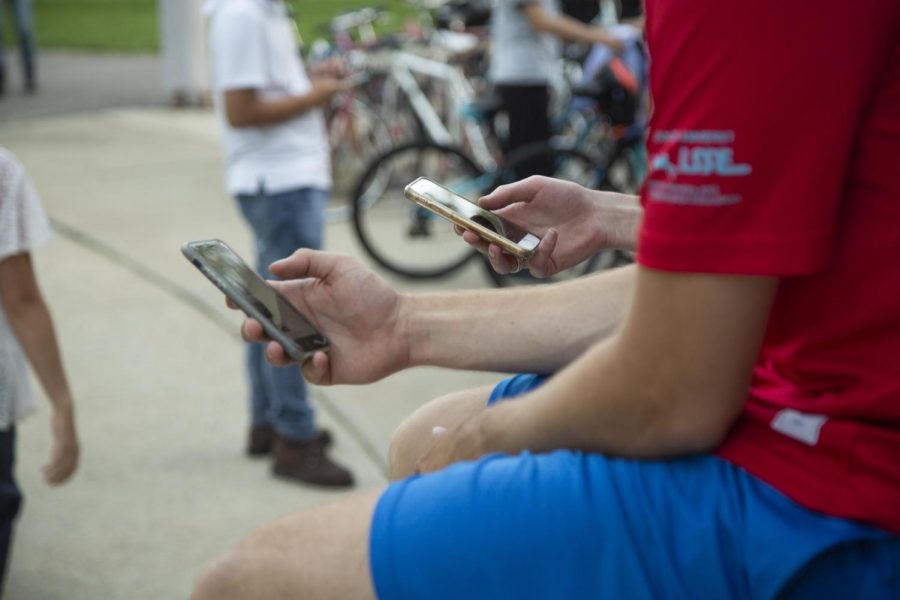 Oberlin launched its rollout of TimeClock Plus, a digital employment management software, this semester. Employees will now electronically clock in and out of their jobs instead of using paper time cards.

In a move away from paper time cards, Oberlin recently adopted a new electronic platform to track student and staff workers’ hours. Many employees will now use a third-party system, TimeClock Plus, to electronically clock in and out of work in real time.

Some college employees have engaged in a trial period of the new system for the past year, but the system didn’t go live for most student workers until classes started this semester.

“The biggest change for students is being able to clock in and out on mobile devices,” he said, citing the change as “the best practice for compensation and labor standards.”

All hourly workers, including students and non-students, will use TimeClock Plus except for those who work in Campus Dining Services. Students who are paid on a stipend instead of hourly basis — such as RAs — do not yet use the system. Students who are paid through the Office of the Student Treasurer and not directly though the college still have not been informed if they will have to use the system or not. Professional, salaried workers such as professors and deans will not use TimeClock Plus.

Despite its intended simplification of the payroll process, the shift to TimeClock Plus has caused some controversy. One issue is that not all managers have the ability to access information for their student employees, as not all student positions have been set up within the system yet.

Another unresolved question is how the system will handle stipended student employees, some of whom work more hours than they report.

College fourth-year student Zite Ezeh is a controller at the Office of the Student Treasurer, and explained that integration with these types of positions present concerns.

“The shift to making it hourly doesn’t work with every organization,” Ezeh said, adding that the new system complicates “the way that [students] are doing their work — whether in the office, or elsewhere.”

In response to this concern, Vitale acknowledged that some stipended jobs on campus may be classified as hourly, though this change has not occurred in full yet. The Student Finance Committee is coordinating with the Human Resources office to accommodate these changes in the interim period.

“We are continuing with stipends for now but will continue to have conversations with HR, payroll, and [Vice President and Dean of Students Meredith] Raimondo’s office on how we will change the system to move away from that,” College second-year and Student Finance Committee Co-Chair Rebecca Kukushkin wrote in an email to the Review. “We do not know what that will look like yet.”

Ezeh also mentioned concern from domestic students, who are capped at 25 work hours for the College per week, as well as international students, who are maxed out at 20 work hours per week. Because of this constraint, student employees must take care to remain within the confines of the new system’s quota.

“The main reason these changes were put in place is so that Oberlin College is compliant with labor laws,” Kukushkin said in an email to the Review. “At the end of the day, the College has to pay people for what they’re working.”

However, Vitale suggests that limits on work hours can help provide balance in students’ lives between campus obligations and employment.

“We as an institution want to be aware that students are not overburdened with employment,” Vitale said.

As TimeClock Plus gives employers easy access to employee hours, some worry that a shift to a digital employment platform will lead to an analytics-based approach to employment and the eventual limiting of job positions.

Vitale responded that “trend reporting has always been in existence,” and that the new application gives employers no deeper access to employee records.

“It is not [HR’s] role to limit student positions,” Vitale said. “We just want to make sure students are paid.”

Some student employees with hourly jobs support the new system despite the concerns of their peers.

College second-year Emery Bosela works at the Science Center Library circulation desk and prefers TimeClock Plus to his previous experience with time cards.

Bosela, now in his third semester as a student employee for the College, describes the system as “pretty easy” and “faster to get into,” although he expressed concerns with the mobile app interface.

Members of the HR team stated that the TimeClock Plus mobile application seems to be working fine, and that employees can find TimeClock Plus tutorials on the HR page of Oberlin’s website.

Vitale encouraged the student body to keep offering suggestions and to review the online documents to stay informed about the new system.

“Be patient with us,” Vitale said. “We’ll do everything we can to make sure concerns are addressed.”