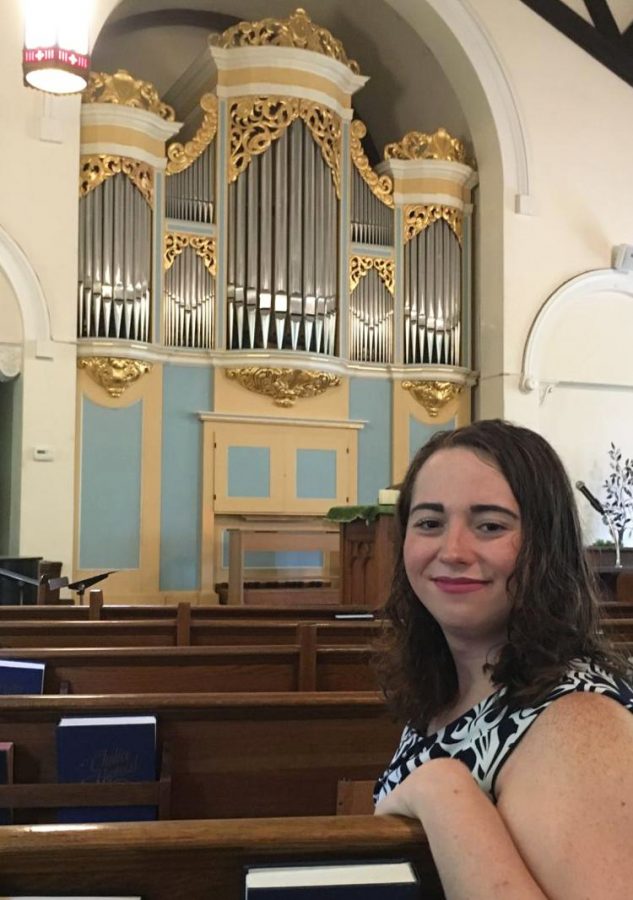 Photo courtesy of The Morning Journal

Rev. Erica Saunders is one of the first openly transgender women to be ordained in the Baptist Church. She joined the Oberlin community last July as the new pastor for Peace Community Baptist Church. She is passionate about her work in congregational ministry and LGBTQ+ education and advocacy. Saunders earned her B.A. from Queens University of Charlotte and her M.Div. from Wake Forest University School of Divinity.

What brought you to Oberlin?

When I was graduating, I was looking at denominational job boards, and I saw that Peace Church was searching for a pastor. … I went on their website, and I saw this thing that they have that lists some of their beliefs. “Science is real, Black lives matter, love is love,” all of this stuff. I was like, “This is a community that I need to know about.” So I ended up applying for the position. I came here for two different trial sermons, and then I ended up falling in love with the people and with the community as well.

I was wondering if you have a particular focus within your religious studies.

I am a little bit of a New Testament nerd. I love to dive into the history and into the Greek. I’ve written lots of term papers, particularly about sexual ethics and gender and Greco-Roman antiquities. I do have a passion for queer and trans theology — kind of constructively looking at the experiences of queer and trans people. How we experience God and spirituality and discerning the gifts and the viewpoints and the ideas of who God is and what it means to be human.

Could you tell me about some of the articles you’ve published?

I’ve written a few things for Christian Feminism Today. I received a scholarship from them, so I presented a workshop at their annual gathering about transgender justice, and what justice — particularly in the church — looks like for trans people. … I kind of conceived of it as a “trans 101” kind of thing because the audience was mostly older and not super knowledgeable about trans issues. I think what set my presentation apart from other general ed things is I conceive of trans peoples’ experience, especially my own, in theological terms — as a kind of spiritual journey and a calling from the divine.

I was wondering what your personal approach has been to spiritual leadership?

I come from the Baptist tradition in which the pastor is definitely a spiritual leader in as much as she provides care for the community and she teaches every week. But we have this idea called the “priesthood of all believers,” where there’s not anything really special about a pastor or an ordained clergy person, aside from our calling to serve the local church. So with that context, I guess I would view my spiritual leadership in terms of relationship. I think that where God is most clearly present and where the spirit most clearly moves is in the context of two more people coming together to do God’s work of forming beloved community, releasing the captive and freeing the enslaved.

Did you always want to be a pastor and to do work in the church?

When I started divinity school, I actively did not want to do congregational ministry. I had started my program with the idea that I would just be doing preparation for a Ph.D. in New Testament. But as I came out as trans and really kind of faced my theology and my spiritual life and completed my internship at the congregation that ordained me, I realized that’s definitely where I’m called, at least at this point in my life. I think that the role of the church is in a period of transition … that we are kind of in a new reformation period, and there’s a lot of really important work to be done that needs to happen in new and creative ways. And I think it’s just too important to lose, and I have to be a part of it.

Is there anything you’d like folks from the College or the community to know about your church and about your work?

Peace Church is openly welcoming and affirming of LGBTQ+ people. They decided that by consensus in 2005. It’s a congregation that is very warm and hospitable and loving, and the folks there care deeply about peace and justice. I am also an affiliate with the [Oberlin College Office of Religious and Spiritual Life,] so I am also available as a resource to students. … I was just conducting interviews for a position that we have at the church, the peace and justice intern. Every year they call a student to help with our efforts to educate the community and be involved in peace and justice issues, issues of God’s reign coming to fruition here.

What role does activism play at Peace Community Church?

So I understand the folks [at Peace Community Church] to be very passionate about activism, and there’s a lot of energy there. And part of what I can conceive of my role to be is helping the congregation to discern what kind of issues they’d like to be involved in and help them to organize most effectively to make an impact both in Oberlin and beyond.

Have you had any idea so far of what those issues might be?

I see a lot of interests, a lot of hands and a lot of different cookie jars. I don’t think that’s just in the church. I think that’s in [the] town and kind of a common thing among more progressive people generally, just because there’s so much to be done. But really coming together and forming partnerships around one or two big and important causes is really, I think, one of the only ways to be agents of real change. Especially when you have limited resources.

How do you respond to liberal people who are critical of the church?

So much of the churches’ public image has been hijacked by one strand of the tradition that’s conservative. … The Christian tradition is so much broader and deeper than what most folks read in the headlines. But it’s also difficult to hold that in tension with the fact that those folks with more harmful theologies — or that do oppose justice movements that actually help people — they do hurt people that are in the pews, too. We have to be with them as they process their own trauma and to bear witness to that and repent for it, even if we’re not directly the ones who caused it — to own that as a part of our tradition. I would say that’s part of why I ended up in the church is to help redeem that image and to help unveil the possibilities for the future.

Is there anything else that you’d like to add?

I do office hours every week from 12–3 p.m. at different coffee shops around town on Tuesday afternoons. I’m usually over at Slow Train if folks want to stop in and talk. But I would just say that I’m really excited to be here, I am already falling in love with the people and the place, and I can’t wait to see what God has in store.