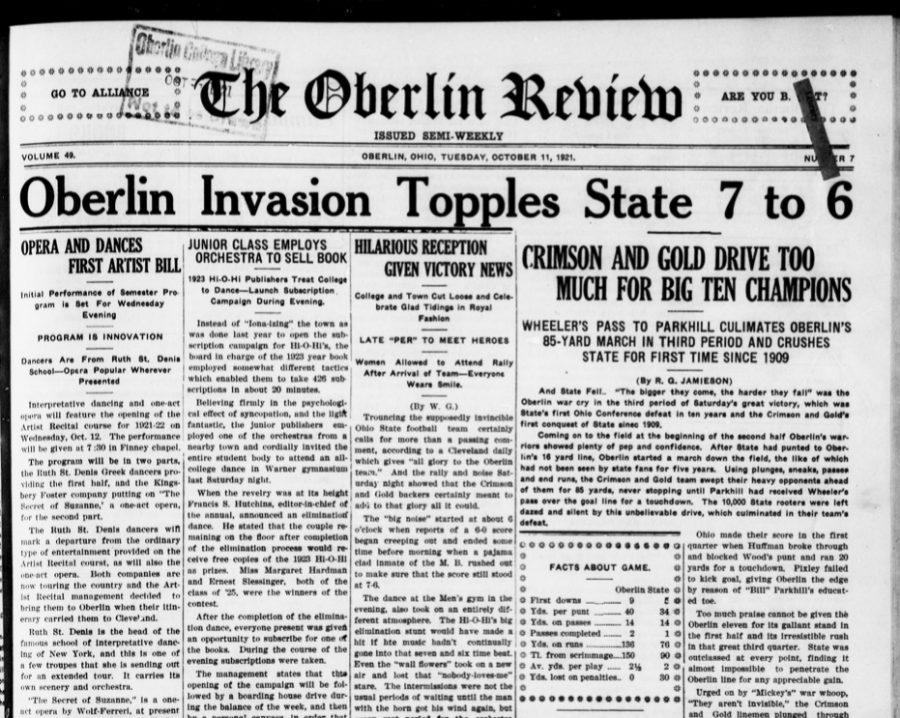 One of the four announcers on ESPN’s Sept. 7 College Gameday segment held up a crisp hundred dollar bill and posed the question, “Who is the last team from Ohio to beat Ohio State?”

He was met with silence. One announcer answered, “Miami?” The other announcers laughed, and all agreed that no Ohio team had ever beaten the football powerhouse. The Buckeyes are a legend in American football and have amassed eight national championships since their establishment in 1890. The university also holds the distinction of being the only team in college football to never lose more than seven games in a single season.

Still, none of the College Gameday anchors earned the hundred dollar bill.

In the year of 1921, Oberlin College football managed to beat Ohio State, 7-6. Ninety-eight years later, no other Ohio school has managed Oberlin’s feat again. Adding to the shock is the fact that Ohio State had more than four times as many students as Oberlin, at the time.

The Review covered the event. Its Oct. 11, 1921 front page read, “OBERLIN INVASION TOPPLES STATE 7-6,” and described the face-off as a triumph: “State was outclassed at every point finding it almost impossible to penetrate the Oberlin line for any appreciable gain.” According to the article, the Yeomen silenced over 10,000 Buckeye fans during the third quarter when a 20-yard pass led to a touchdown, marking one of OSU’s only two touchdowns conceded over their entire 1921 season.

However, this anecdote from Oberlin football history may be on its way to being forgotten.

Oberlin College inaugurated its varsity football team in 1891 as a result of a student petition that called for the opportunity to play casual athletics after classes. Nowadays Oberlin is not known for its athletics, and many would now be shocked to discover that Ohio State was the losing team when the two schools first played back in the 1890s, with Oberlin winning their first six games by a whopping combined score of 200-14.

The culture of football at Oberlin has changed since 1890. After the 1920s, Oberlin found it hard to keep up with more prominent academic institutions who had more money allocated to their varsity athletics. Additionally, Oberlin never wanted to use football for profit. Ohio State built their Ohio Stadium with its original seating capacity of 66,000 in 1922 while Oberlin completed a stadium for 3,000 seats in 1925. The goal of Oberlin’s administration and faculty has always been for students to play sports for the love of the game while still focusing on their education. The Oberlin football team excelled until the early 20th century, and today, the 1921 win against OSU stands as an anomaly.

In 1978, Oberlin Athletics created the John Heisman Club, named after the legendary football player who coached at Oberlin in 1892, with the goal of funding athletics with donations. The success of the Heisman Club money raising efforts led to the new Health and Wellness building and other athletic facility improvements.

It is important to revisit this aspect of Oberlin athletic history nearly a century later. Although Oberlin prides itself as a rigorous academic institution, the 1921 football victory demonstrates a rich and varied history that stretches to multiple areas of the college experience, including athletics.