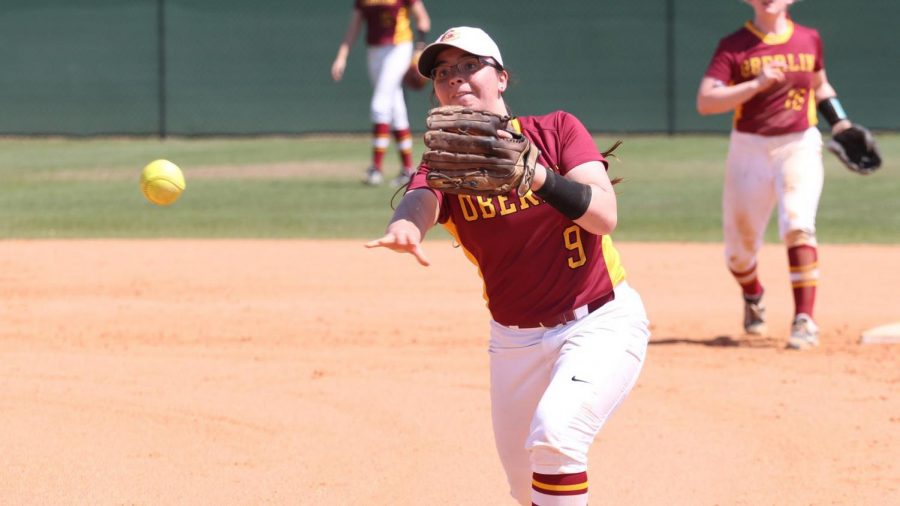 College fourth-year Leandre Glendenning is from Concord, CA. As a varsity softball player majoring in Biology and French and minoring in Religion and Chemistry, Glendenning can be found in all corners of campus. She has conducted biological research about cells and genetics. In her spare time, she knits and crochets for various charities, including Knit-a-Square, Project Linus, and Alice’s Embrace — all of which provide blankets and knitwear to those in need around the world. When considering her future endeavors, Glendenning hopes to find herself at a graduate program doing Biology research.

Tell me about the research you do on campus.

I do research in the lab of Professor [Maureen] Peters in the Biology department. We do a lot of genetics experiments. Right now we’re focusing on trying to identify epistatic effects between several genes in C. elegans.

What specifically do you do?

The first summer was in a molecular biology lab. I did a lot of PCR, which is basically when you look at the products of DNA. DNA gets converted to RNA and then to protein — we’re taking the RNA step and amplifying it so that we can look at what’s actually being produced in the gene. Last summer I got a really unique opportunity to work with the same professor and the worms that I had been working with before, except it was a joint project between her and a microbiology professor elsewhere in the department. What we were looking at is whether Legionella actually infects worms or whether worms serve as a host for Legionella.

Your research has gained some attention. What has followed your efforts?

My lab group and I went to the 35th Annual International C. elegans Conference at [the University of California, Los Angeles], which was really cool because I’d never been to a conference before. It was basically five days of attending a bunch of talks. On the last day there was some partying and a little comic show and other fun stuff.

How many people were there?

I think it was around a couple thousand people, but people came from other countries — from Europe and China. So that was actually the last summer that they would have the conference at UCLA. From now on, it’s going to be in Europe because it’s closer to more of the attendees.

You’re in the process of applying to grad schools. What are you hoping to do in the future?

I would like to get a Ph.D. in microbiology. I hope to take that degree and go into industry and work in drug development — either antibiotics or other … means of treating infectious disease.

My dream job would be to have a nice industry position where I get a solid salary — so probably doing research for one of the big pharmaceutical [companies] that every biologist hates. But I would be working for a big company, and it would give me a solid paycheck and make me feel like my work is actually making a difference. I want to do the sort of research that has an immediate impact. I want to do therapeutics.

It’s your fourth and final year on the Oberlin College softball team, and you’re one of just two seniors. Talk about your journey.

I think that when we came into this program, there weren’t as many people as there are now, and I think we had lower standards. As other classes have come in, there’s been a lot of progression toward becoming a harder working team. When we first came in, it wasn’t expected that you take extra reps with the coaches before and after practice, and now it’s pretty much expected that everyone who wants to improve and wants to play does that. I think there’s been a lot of progress. There have definitely been hard times because we’ve never had a winning season. But I think we’re definitely making steps in the right direction. I think we have a lot more commitment now and that our expectations are getting higher.

You’ve played a multitude of positions for the team — pitcher, first base, second base, and outfield.

I only played first base for a short stint, but yeah, I came in as a pitcher and middle infielder. Then [Head Softball Coach Sara Schoenhoft] told me I would be playing outfield when I wasn’t pitching my [first] year. And I was like, “Okay, great.” Then I tried to become an outfielder and she told me I would no longer pitch. So I moved back to second base. I’ve tried to fill whatever role Coach needs. I’ll do whatever I need to to help the team win.

Reflecting on your years at Oberlin, it might be vital to mention that you lost your mother shortly before arriving here and had to adjust to being away from your dad for the first time. How did that go?

Moving so far away was difficult because my dad is a single parent, and so, we were really close. But on the flip side, he worked a lot and I would go straight to practice after school, so we didn’t really see each other as much as one would have thought. We kind of just crossed paths, so I’ve always been somewhat independent.

The biggest thing was doing my own laundry and doing my own dishes and realizing that all these peripheral tasks that as kids we were used to having a parent do, you have to do yourself [in college]… You need to learn how to balance all of your chores and commitments and be able to keep your living space tidy and livable yourself. That was the biggest change for me. And when something goes wrong, you can’t just be like, “Dad, the internet’s not working.” You have to figure things out for yourself.

What are you hoping to get out of your last year at Oberlin?

The conference championship. That would be cool — although our program has never made it to the conference tournament, so maybe we’ll start there. Otherwise, I’m just trying to keep up my grades, keep playing softball, and do the best I can. I kind of want to go out with a bang. I don’t want to just wilt away into obscurity. I want to have a better season because it’s the last season I’m going to play. I don’t really intend to do anything besides coach after this, so I really want to have a good year. Making a conference tournament appearance would be great.