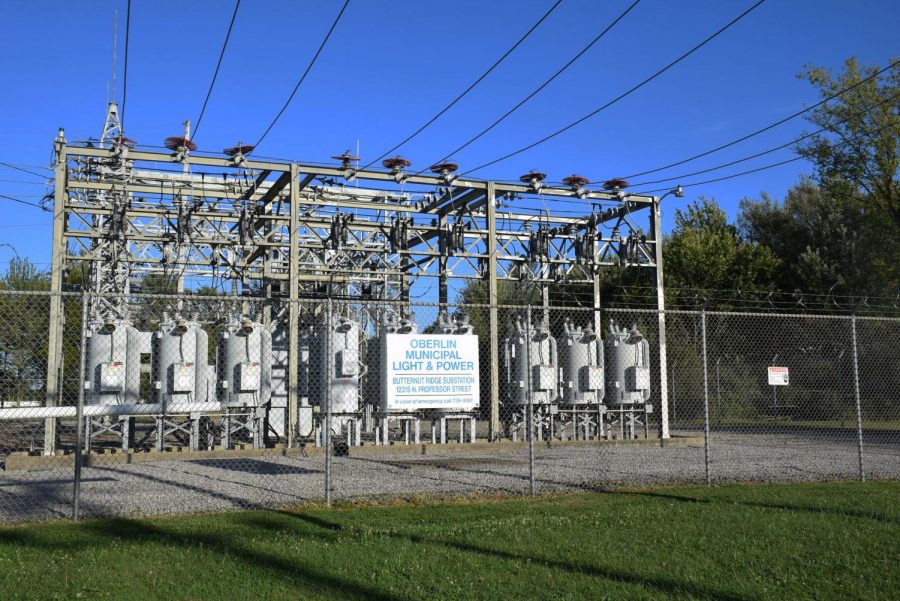 The Oberlin Municipal Light and Power plant generates and distributes electricity to Oberlin’s residents. The plant is part of the redistribution process that happens when the city sells Renewable Energy Credits back into the electric grid and funds the Sustainable Reserve Program.

The City of Oberlin’s Office of Sustainability has completed a 2019 iteration of a greenhouse gas inventory, which will be released on the city’s web page in the coming weeks. The inventory is the latest of four, dating back to 2007, and was performed in order to prioritize how to spend the city’s Sustainable Reserve Fund.

“[The greenhouse gas inventory] is what we’re going to look at as a guide when we start looking at what initiatives are really going to be the most important and in what areas of the community emit the most carbon,” said City of Oberlin Sustainability Coordinator Linda Arbogast.

In June, City Council unanimously endorsed a climate action plan that will be carried out over a five-year term. The CAP makes a plan for the city to attain its goal of 100 percent carbon neutrality by the year 2050.

“We’ve updated the plan every five years — this is the third iteration,” explained City Council President Bryan Burgess. “Each plan has been more ambitious than the previous [one], so we try to identify the things that we’ve already accomplished and then set new goals for the next year’s.”

In order to attain the goals laid out in the city’s CAP, the Sustainable Reserve Program Fund was established around a decade ago. The fund receives its money from the sale of Renewable Energy Credits which Oberlin receives from investing in renewable energy sources. When these energy sources generate more power than the city can use, the excess RECs are sold back into the power grid and used as electricity. This money is designated specifically to go back into the Sustainable Reserve Fund.

These activities are supposed to bring social, environmental, and fiscal benefits to the Oberlin community. City Council and Oberlin Municipal Light and Power invite Oberlin residents to offer their input on what projects Sustainable Reserve Program should fund.

“We have a strong goal with the Sustainable Reserve Fund to support the community at large and we feel it is important that everyone has access to the money if they have ideas,” Arbogast added.

Ray English, emeritus director of libraries, is running for a seat on Oberlin’s City Council. In an email to the Review, English explained that he supports this community-based approach.

“City Council will be asked to approve expenditures from the Sustainable Reserve Fund that are $50,000 or more,” English wrote. “I will be an advocate for [ensuring] the city’s own projects — as well as projects by agencies and organizations outside city government — are both effective in reducing emissions and also effective in benefiting lower-income residents equitably.”

“We see our plan as a community-wide plan, so it includes everybody,” Arbogast explained, “So of course we also want Oberlin College to succeed in its planning.”

The College has an action plan of its own, titled the Oberlin College Carbon Neutrality Resource Master Plan, which touches on concepts similar to the CAP, such as adjustments to building heating practices, waste disposal, and increased reliance on alternative energy resources. This plan, however, is dedicated to carbon neutrality by 2025, rather than the city’s goal of 2050.

Professor of Psychology and Environmental Studies Cindy Frantz supports the CAP but believes that 2050 is not soon enough to enact the changes necessary for environmental preservation.

“The city has a commitment to carbon neutrality, and the big obstacle to that is money,” Frantz said. “These funds can help achieve that goal.”

While Frantz applauds the work conducted as a result of the CAP and the Reserve Fund, she also believes that Oberlin alone cannot be responsible for the global-scale change required to reverse climate change.

“Oberlin is really lucky that we have this fund,” Frantz said. “[But] the world around us needs to change with us.”