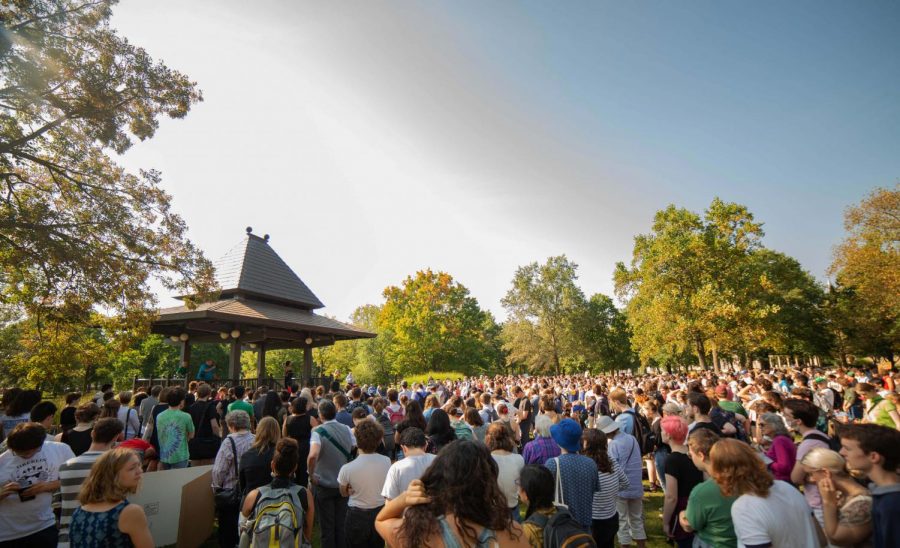 Students and community members gather in Tappan Square for a climate strike on the morning of Sept. 20.

Over 600 Oberlin students, faculty, staff, and residents — including some as young as 10 years old — gathered around the bandstand in Tappan Square last Friday to take part in a demonstration hosted by climate activism-focused student group Sunrise Oberlin. The event was one of thousands of Climate Strikes that took place across the world that day, as residents took time off school and work to show solidarity in the fight against climate change.

The strikes were inspired by 16-year-old Greta Thunberg and other young climate activists around the world. True to these roots, Oberlin’s strike was organized by members of Sunrise Oberlin in collaboration with members of Oberlin High School’s Sustainability Club.

Several speakers took to the bandstand to address the crowd, beginning with College second-year Faith Ward, a Sunrise organizer.

“For me, it was important to speak because I do have a lot of personal stories related to climate change. … I’m from south Florida, which is a front-line community,” Ward said Monday on the WOBC-FM show The Weekly. “It’s important to me to be emotionally vulnerable about these things because climate change is not just politics, it is very personal.”

Many of the speakers focused on themes of environmental justice, highlighting the disproportionate impact that climate change will have on marginalized communities around the world.

“Especially in this time, we need to prioritize Black and Brown communities that are facing the most environmental injustices with the least resources,” said Sunrise member and College third-year Imani Badillo,

according to Sunrise’s press release. “The climate strike at Oberlin is important because we can use the power of a group of college students to showcase and protect those communities that are asking for our help.”

Sunrise also used the event as an opportunity to encourage Ohio’s Democratic senator, Sherrod Brown, to endorse the Green New Deal. The GND is a bill intended to combat the corporate and industrial causes of climate change while increasing economic opportunity for workers. While the bill has gained significant traction in Congress’ progressive wing, Brown has yet to endorse it.

“At Tappan, hundreds of young people wore air masks inscribed with mottos about why they are striking today, and Sunrise Oberlin plans to deliver these air masks’ messages to [Brown’s office] as a sign that his constituents demand an Ohioan and federal Green New Deal and [a] just transition for frontline communities,” read Sunrise’s press release.

For Paul Sears Professor of Environmental Studies and Biology John Petersen, OC ’88, the youth leadership on display at the Climate Strike was inspiring.

“Climate activist Greta Thunberg is critical of us adults talking about hope without action,” Petersen wrote in an email to the Review. “But Oberlin’s Climate Strike left me with a great deal of hope. … I was likewise encouraged to learn of faculty from across many disciplines, including Conservatory faculty, discussing climate action in their classrooms and encouraging students to participate. The reality is that the survival of human civilization is contingent on ramping up climate activism and action.”

Moving forward, Sunrise will continue to engage students from both the College and OHS to demand action from elected representatives on climate change.