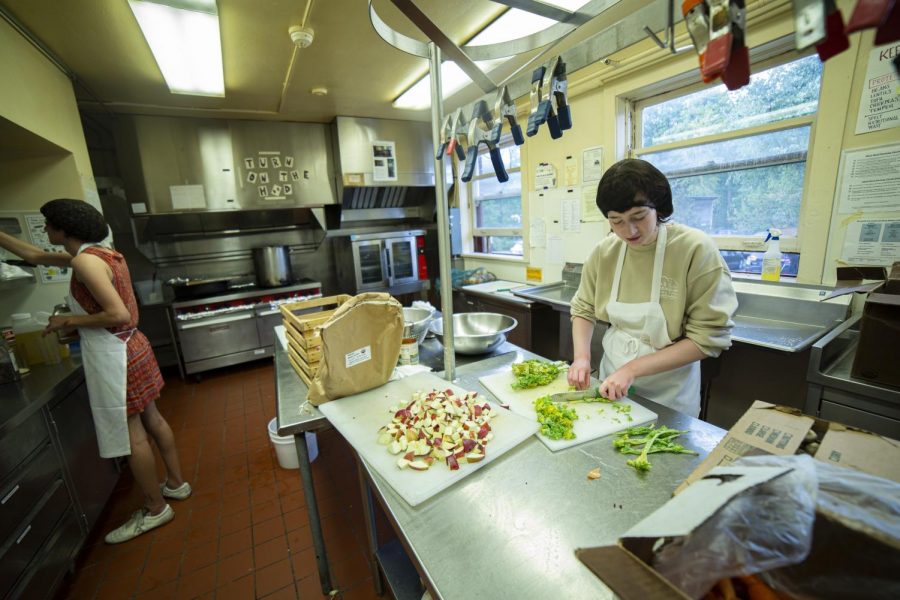 Members of the Oberlin Student Cooperative Association prepare a meal in the kitchen of Keep co-op. Canceled meals due to a turbulent interim period have raised concerns for OSCA members over ongoing negotiations with the College administration.

Ongoing negotiations between the College and the Oberlin Student Cooperative Association have not been affected by recent meal cancellations, according to Vice President and Dean of Students Meredith Raimondo and OSCA President and College third-year Gio Donovan. These negotiations were sparked by the Academic and Administrative Program Review, which recommended that the College and OSCA work together to craft a sustainable financial relationship.

In an email to Keep co-op members, the Dining Loose Ends Coordinators of Keep Cottage, College third-year Zoe Iatridis and College second-year Sophie Falvey, sent a quote attributed to the OSCA “Fab 5” that expressed concern over canceled meals during the interim period. Interim is the election period at the start of the semester before schedules for cook and crew shifts have been permanently set, making canceled meals a more common occurrence during that time. All of OSCA is out of interim at the time of writing.

“These issues [of meal cancellations] are being talked about among high-level college administrators,” read the quote in the email, which was sent Sept. 23. “This perception is massively harmful to us as an organization and threatens our credibility and reputation with them.”

“Per OSCA’s rent contract with the College, OSCA is supposed to buy meal swipes for every member of a co-op when a meal is canceled,” the email read. “This means using your co-op’s budget to buy swipes for every single member, every canceled meal. Since canceled meals haven’t been a serious problem in the past, this section of the rent contract hasn’t been enforced by the College. From our meeting this morning, the College was very clear that this policy will be enforced going forward.”

Raimondo denies the claim that the College administration has not previously upheld the provision in OSCA’s rent contract concerning co-op meal cancellations.

“The College follows its contract with OSCA,” Raimondo wrote in an email to the Review. “This contract provision is designed to prevent student hunger. Because it is a contractual agreement, the College and OSCA must always follow this plan.”

According to Raimondo, the current contractual provision regarding canceled meals has been in effect for at least three years.

“OSCA is expected to notify the College if it cancels meals so that the College can add meal swipes for OSCA members,” Raimondo wrote. “Our shared goal is to ensure all students have access to food if there is a kitchen closure.”

Donovan specified that, prior to these meetings, OSCA was already aware of the meal cancellations and motivated to solve them.

“We were getting a lot of stuff about canceled meals from members who were just concerned about their co-op, [and] not entirely happy with how the year was starting,” Donovan said. “I think that when it came to our attention from the College side, I wouldn’t say that [was what] motivated us to do anything about it because we were very much motivated before and upset.”

The provision in OSCA’s rent contract states that the College will provide and pay for meals for co-op members in the event that an OSCA kitchen is closed due to an equipment issue for which the College is responsible. This happened last year when the Hobart dishwasher in Pyle Inn co-op was inoperable for a brief period.

“To my knowledge, the [provision] … is the same,” Donovan said. “This interim was a bit more rough, [which is] something that has come up in our weekly facilities meetings.”

The provision also requires co-ops to pay for College-provided meals when a meal is canceled due to an operational issue that OSCA is responsible for, such as when a head cook calls in sick. In the instance that a kitchen is closed due to a circumstance that is beyond either OSCA or the College’s control, the two parties are required to split the cost of the co-op members’ meals.

OSCA pays a reduced business price, which for the 2019-2020 academic year amounts to $7.50 per meal. The regular price of lunches and dinners is $10 at Stevenson Dining Hall this year.

“This represents the first increase since the [2015]-2016 [reduced business rate] rate was set at $5.50 based on increased costs,” Vice President for Finance Administration Rebecca Vasquez-Skillings wrote in an email to the Review.

“Each co-op has a budget for expenditures, and all expenses are tracked weekly,” Doan wrote in an email to the Review. “Of course, if the co-op in question has to purchase meal swipes for its members, the co-op treasurer logs the expense amount. We want all of our students to have meals. All co-op expenses and income affect the bottom line as with any financial report.”

College second-year Mikael Frey, one of Keep’s kitchen coordinators, believes that there could be better ways for OSCA members to get food in the event of a meal cancellation than through CDS.

“I’ve heard people concerned about [food access who] cannot use CDS,” Frey said. “Those are people who have their meals swipe for CDS and cannot use CDS — because of dietary restrictions, because of various food anxieties, because of Stevie’s cross-contamination issues, et cetera.”

“One thing that I think is really great is that Fairkid actually started a reserved head cooks list, which is really awesome that they have people that get trained that aren’t [one of the normally scheduled head cooks],” Donovan said. “They’re just someone who was head cook-trained, ServSafe-certified, that’s like, ‘Oh, [if] this meal gets canceled, I can head cook. … I think that’s something that I would love to see in other co-ops.”

Donovan and Raimondo both stated that the concerns that have come up at the start of this semester have not affected the ongoing negotiations between OSCA and the College.

“None of this has any impact on negotiations,” Donovan said. “… Right now, we’re focusing on the bigger picture of OSCA and the College’s relationship and figuring out a way that we can both be sustainable.”

Raimondo stated that there will be an update on the ongoing negotiations between the College and OSCA sent out to students in the next week.