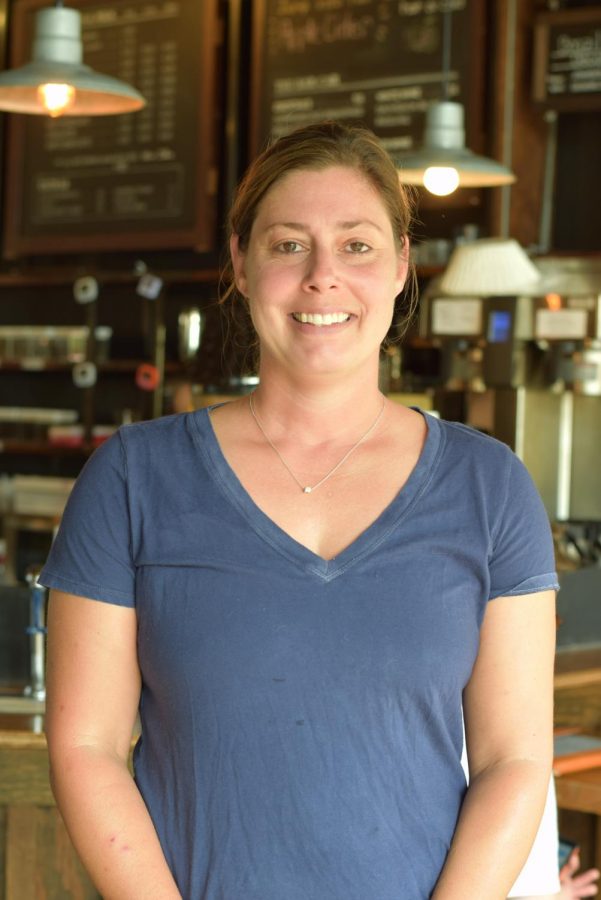 Jessa Klotz New, OC ’01, co-founded Slow Train in 2010 and The Local in 2012 with her husband, Oberlin’s Head Men’s Soccer Coach Blake New, and Zach Tesler, OC ’06. Born in Rochester, New York, she received a graduate degree from Ashland University certifying her to teach third grade. A few years later, she decided to make a life and career change. She moved back to Oberlin to settle down with her family and tackle a new challenge. She is now a mother of two daughters and is passionate about making Slow Train and The Local welcoming to all Obies.

This interview has been edited for length and quality.

After graduating from Oberlin, what inspired you to open Slow Train?

So, with Slow Train, I actually was not a huge coffee drinker at all. I didn’t start drinking coffee until we had our second kid.  I was like, “Okay, I need to start drinking coffee.” But I had no discernible taste. And, you know, no preference. It was like just caffeine, whatever it is. My husband is the men’s soccer coach at the College, and one of his players is from Seattle. His name is Zach Tesler (OC ‘06.) They kind of had this running joke, like, “What do you want to do when you graduate?” Zach was like, “I really want to open a coffee shop in Oberlin.” And I was like, “All right, well, if you’re serious,” because at that time, I was staying home with our kids. I had gone through a master’s program for education, decided I didn’t want to teach. I didn’t know what I wanted to do. It was sort of this bizarre combination of factors.

It wasn’t like it was a lifelong dream to open a coffee shop. But I wanted to do something in the community because I had been a student, and I wasn’t a student, and I hadn’t been a student for a long time. I wanted to find a different identity in the town, and I wasn’t really sure how to do that. When this opportunity kind of came up, like, “Hey, this is crazy. But you know, all we have is this one coffee shop on the corner.” … They didn’t really focus on the quality of their coffee, but they were the only gig in town and people went there. I would take my daughters there, and I didn’t feel like they were very friendly. The more I thought [about] it, I [realized,]  we need a community space, with really good coffee. Whatever we serve, coffee, bakery, food, it needs to be really good, or it’s not worth doing. But [we also need] also a spot where people who aren’t associated with the college or aren’t any more associated with the college [could gather].

After successfully running Slow Train for two years, what inspired you to open The Local?

As soon as we felt like we had stuff under our belt. We listened to our friends in the community, which I guess ended up being a good thing. But they were like, “You have to open another one. It’s always full. The lines are too long, we want another one.” And I was like, “That’s absurd. Like, this town cannot support two independent coffee shops. That’s crazy.” But Zach and Blake are way more [risk-loving]… And so, Zach went on a hunt for a spot. Our friends, Jason and Matt [Adelman], who own The Feve, had just bought the building that was the laundromat that is now you know, the bike shop and us. They took it from this hideous, hideous thing to this gorgeous building. …  And then Jason was on a hunt to find a tenant. As soon as he found out that we were even considering it, he was like, “Oh, we have to do this. We’ll make it work, we’ll help you with the build out, it’ll be great.” I had no say after that. Everyone was so excited. I was like, “Oh my God, but then we have to run it.” But we all seem to balance each other out in terms of logic and rash decisions in a way that works. So, when we decided to go through with it, we knew a lot more at that point.

In the beginning, did you face any obstacles?

When we opened [The Local,] nobody came, which was really bizarre. When we opened Slow Train, it was like we didn’t even say we were opening and there were just lines. Then we opened The Local, and no one came, and we were like, “Uh oh, did we make a huge mistake?” I thought, “Okay, well we opened almost in the wintertime, it’s in the basement, like people don’t totally know about it, you can’t really see it from the street. Like we’re really going to have to actually try harder with this one.” We were really lucky [with Slow Train]. And then with [The Local,] we were like, all right, if we’re going to make this work, we gotta find a way to drag people in there. And that’s where the bagels came in.

So, I’m from upstate New York, and Zach and I are both huge bagel fans. I don’t know if it’s because we’re both Jewish. We just crave bagels. Where I’m from, there was like three stellar bagel shops right in my little town. When I got here, and I was like, “Oh my God, these aren’t bagels. This is gross. This is bread.” And so, we were like, what if we found really good bagels. There was a shop in Cleveland — not the one we’re currently using. They’re amazing, obviously, as well. But the first one we started with, basically, they were from New York, and they started this little bagel shop 20 years ago, and it’s gone through the family. And so, we brought them in. As soon as we did that, we found a way to drag people in here. Then we almost couldn’t keep up with the bagels. So yeah, I don’t know if it’s just a matter of making a ton of mistakes, but then making just the right amount of good decisions along the way. But it’s turned out to be a really great adventure.

Between Slow Train and The Local, do you personally have a favorite?

I can’t even imagine Oberlin without Slow Train. What did students do here before?

You know, it’s funny, there are moments where I will sort of stop and look around. And I’m like, “What did we do? Like, where did we go?” When I was a student, and I graduated in ’01, the only places in town we ever really went were Lorenzo’s, The Feve, and then we’d go to the Mandarin. And that was it. There was a Pizza Hut in town at one point and a couple other little fast food chains that came and went, but nothing that stuck. Maybe people who drink coffee went to Java Zone. I didn’t know anyone who went there, and I didn’t drink coffee in college. But for the most part, as sad as it sounds, we would hang out on the colored couches at Mudd. That’s where we worked.

What did you love most about being an Obie?

Honestly, I think what I loved most was [that] I proved to myself that I could be independent. Growing up, I had never gone away for the summer to camp, which a lot of my friends did. And I had never really been apart from my family for very long. When I came out here, my first year, I was super nervous. It took me a good semester to acclimate. It’s hard at 18 to come out to somewhere that you’re not familiar with, and continue living and take care of yourself and do well in school and make sure you’re hydrating. It’s a lot. But once I made that transition, I kind of felt like I could do anything.

What made you decide on a career change after receiving a degree in education?

I did a post-bachelor’s program through Ashland University to become a third-grade teacher. I got all the way through the program, and I had a great experience … But at the end of it, I was like, this is just not for me. Like, I love kids. I love education. But I just I couldn’t. … I think I would have figured it out. But I just knew that it just was not what I wanted to do long-term.

What made you ultimately decide to stay here and settle down in town?

I went to grad school away from here. I thought I was going to end up in California; that didn’t end up happening. So, I just sort of stuck here because I was familiar with here, and I didn’t want to go back home. And then, after the whole grad school thing, and working at [a] preschool, we finally had our first kid. I was really bored out there. I love being home with our kids, but that also is something that requires a lot of patience … So, [around 2005] we decided, let’s move to Oberlin. Let’s come back to the community. And, you know, maybe I can figure out what I want to do for the rest of my life here. And then, I mean, it really wasn’t more than three or four years later that this came about. At that point, we’re like, “All right, are we going to stay here? Because if we do this, then we’re going to stay.” We didn’t know at that point. We kind of were able to solidify the commitment at that moment. I don’t think I ever really in my head knew where I wanted to end up. I just knew the type of place I wanted to be.

Looking at the College years later, do you feel the culture has changed or grown in any way?

Yeah, for sure …. the people are different. I think the underlying tones of what this institution is have not changed. … I feel like the majority of students here care so much. Maybe they care so much about too many things sometimes. But … it’s how they use that energy and how you approach situations where you want change to occur. But there’s still that fight for making sure that people are loved and respected and appreciated. That has not changed. Maybe tuition has changed, maybe the dynamic in terms of the areas of the country that people come from has changed, but the root of what Oberlin is, I don’t think [that’s] changed.

I guess I would say one thing that I feel has been a challenge for me the last few years, and something that I want the students to know, especially — because you guys get so much information in so many different ways all the time — [is that] I want this place to feel like it’s yours, along with everyone else’s. If there are things that you think we could do differently or better, I may agree, I may not agree, but I’ll always listen.