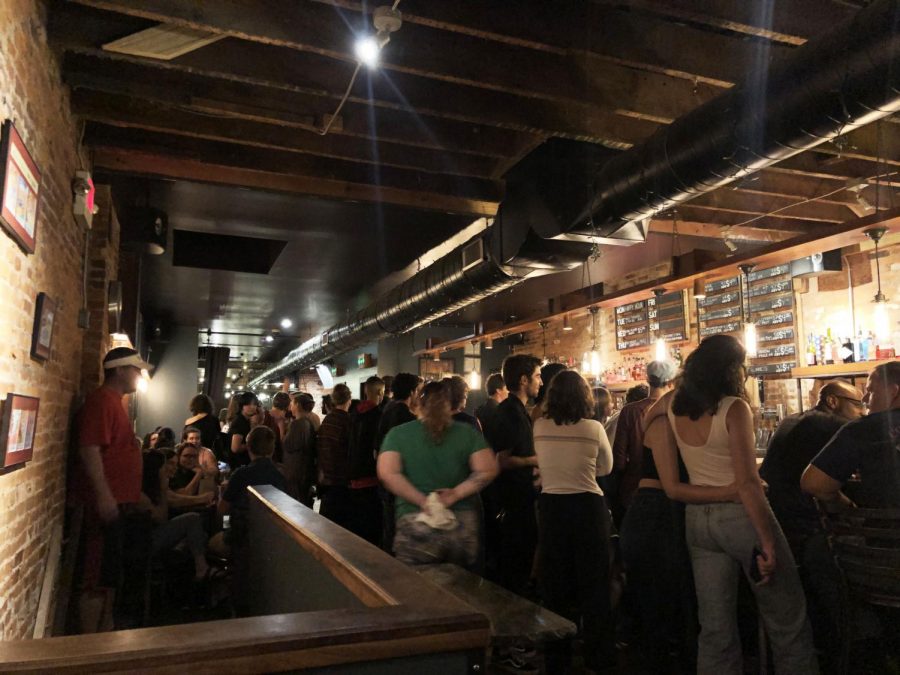 Students line up at The Feve counter for Long Island Night this past Wednesday, in what has become a beloved Oberlin tradition.

People often use the phrase, “If only these walls could talk,” but at The Feve, they actually can. Hidden between the small cracks in the brick walls are small pieces of paper that patrons leave with notes to future customers. Looking at these notes, I wonder about the folks who have come here before me.

The Feve is one of the few bars in town, and, subsequently, the setting for many urban legends. The night that generates the most rumors, by far, is the Long Island Night special every Wednesday during the school year.

It’s the best weeknight on campus to drink. The combination of Long Island night – where a Long Island Iced Tea is only $5– and Splitchers at the ‘Sco make it an ideal hump-day treat.

“Long Island Night became a Wednesday staple in Oberlin the same week The Feve started selling liquor,” manager and bartender Dan Gregus wrote in an email to the Review. “It was packed every night, but Long Island Night was different. Wall-to-wall people, sipping Iced Teas trying to talk over the blaring metal as they pregame for Quarter Beers at the ’Sco. This became part of the Wednesday routine: Pregame at The Feve, hit the ’Sco around midnight, and then back to The Feve for a night cap. The post ’Sco nightcap might be a thing of the past, but the enthusiasm displayed during the pregame is unrivaled.”

Students and residents all have their own stories of The Feve from over the years: nervous first dates, belligerent 21st birthdays, instant friendships, or awkward run-ins with professors. All this in addition to the campus gossip, which ranges from attempted threesomes in The Feve’s bathroom to celebrity comedians being refused service.

Seventeen years of history at The Feve is a lot to uncover — especially when memories are lost so easily to drinks containing a questionable amount of hard liquor.

“One of my friends said, ‘I’m not sure anyone ‘remembers’ Long Island nights, which is a testament to how much fun they were,’” said Asheley Smith, OC ’03, in an email to the Review.

Luckily, we have the bartenders’ memories to rely on. Josh Wilson, who has bartended at The Feve for 12 years, said Long Island Nights have calmed down over the years.

“It was like war,” said Wilson about Long Island Nights in years past. “This year we haven’t really had a crazy Long Island [Night]. I would say the craziest one, times that [craziness] by like four, easy: standing room only and instead of hearing music and people talking or even yelling, you’d just hear glass breaking 20 feet away, constantly, all night long. And then having to chase people out, make them bring their drinks back in, [and] people [were] throwing pints off into the parking lot.”

He’s witnessed a range of wild nights, resolving bar fights and even driving customers home. What surprised me more than these stories, however, is the strange way the bartenders know they are in for a rough night: the presence of a full moon.

“My first day of working here, I didn’t believe in that,” Wilson said. “I [thought] that’s the urban legend kind of thing. But it kept happening. A couple of different times, I’d come out back and just be like, ‘God, people [are] going [out of control].’ And I look up and a it’s a full moon. I don’t want to admit it, but this is a real thing. It just kept happening to the point where I was like, ‘All right, this is real.’”

Aside from the debauchery and rumors, there’s something magical about the routine of Long Island Night. The fact that there’s only one late-night bar in town and one dance club on campus may seem detrimental to partying, but it actually pushes people in the community together.

“Oberlin is not known for [the ability] to go out,” said Jude Fernandes, OC ’19. “[The Feve] was the one place where you could get a bar experience. I actually got to meet a lot of new people by going there because you just kind of meet at the bar. I find it more social than other Oberlin going out type things like a house party, and people seem more open to new conversations for some reason.”

In addition to current students, alumni often visit The Feve when they come back to campus.

“My fond memories are more as an alum,” said Mel Maisel, OC ’93 in an email to the Review.

“For a few years I was coming back to campus every fall for Alumni [Leadership] Council, and The Feve was where you could go and invite yourself to any table of people wearing alumni name tags and have a great time!”

There are too many memories to print them all, Gregus pointed out when asked for stories about Long Island Night.

“My years tending bar at The Feve have yielded more anecdotes than I have time to tell,” wrote Gregus. “But for the sake of modesty, I’m going to leave them up to speculation.”

What can’t be imagined can be discovered from alumni, residents, bartenders and, of course, the iconic little notes in the walls.