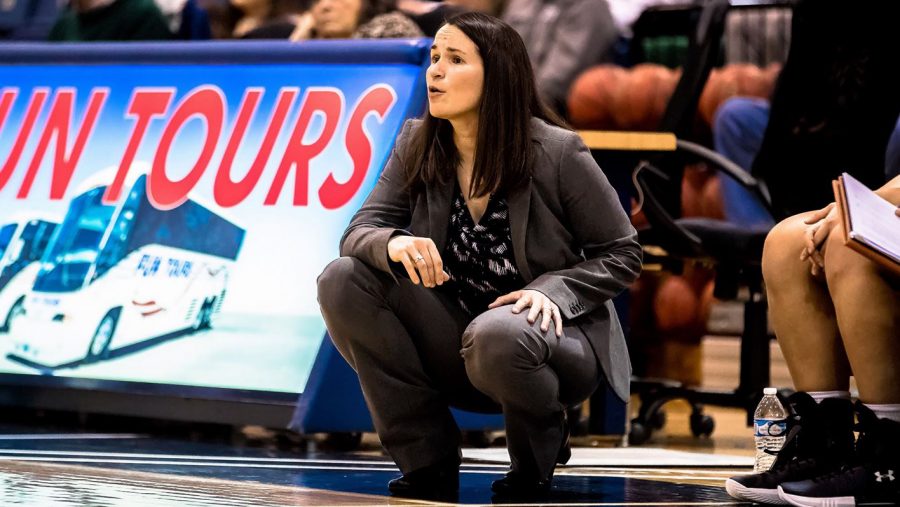 Stephany Dunmyer is starting as the new Oberlin women’s head basketball coach. Originally from Pemberville, OH, Dunmyer majored in Psychology and played varsity basketball for Kenyon College. Named the 2000 North Coast Athletic Conference Player of the year, Dunmyer served as assistant coach at Indiana State University before becoming the head coach of Virginia Wesleyan University, where she stayed for 16 years. At VWU, Dunmyer compiled a record of 250–181 and was named the Old Dominion Athletic Conference Coach of the Year three times in her tenure. Dunmyer is excited to be back in the NCAC and is looking forward to the team’s first game at Alma College on Nov. 9.

How has the adjustment been at Oberlin in terms of getting to know the team and staff?

It’s been great. I think the process of moving was awful. Moving after being somewhere for 16 years was probably the most daunting aspect. Even just taking the job, [there was] the thought of having to uproot [my] family. I had been in Virginia for 16 years and my wife Molly had moved to the area about four-to-five years before that, and we have a two-year-old son, Fletcher. So we had so many great connections down there, but the draw of Oberlin and what a great academic institution it is brought me here. I just felt, from a women’s basketball standpoint, where they’ve come and how successful they can be really was something that drew me back here. It was helpful that Oberlin is also closer to my parents, and Fletcher being closer to his grandparents was a big draw as well.

That initial transition was tough on just a personal level, but the team has been awesome. I was able to meet with them in the spring before they left campus for break and everything. I really tried to stay in contact as much as I could in the summer. They’ve made things just seamless in terms of that transition. I think they’ve welcomed me with open arms, which has been awesome. They’re excited for a fresh start in many ways. I think any time there’s a new coach and new energy, or a new coaching staff that comes in, it’s automatically a different feel and a new energy that’s injected into the program. I think Coach [Kerry] Jenkins did a great job with the program; change can be really good sometimes in terms of just a motivating factor as well.

What led you to playing collegiate basketball?

I played volleyball as well in high school and I played softball up [until] eighth grade, but I just loved basketball. My dad coached [and] I had an older brother and sister who were both involved in athletics and both played basketball. Volleyball ended up being something I played just to get to basketball season and to stay in shape. For me, it became a priority wherever I went, because I knew I wanted four more years of playing basketball. My whole search was based on who wanted me to come there, what best fit from an academic standpoint, but also from an athletic standpoint. Following that my sophomore year, I decided that if I could get into basketball, that would be a great job.

How does it feel to be back in the NCAC as a coach instead of a player?

It’s exciting. We haven’t had any coaches meetings. I do see some of the NCAC coaches recruiting, but often we’re not always recruiting the same student-athletes. So we’re not always crossing paths. We compete with Kenyon in that standpoint. There is definitely an added excitement to compete from this side of things now, there’s some coaches that are the same but there are also a lot of new coaches. The NCAC is a great conference and from a travel standpoint, it’s a little less travel than where I was before. Also really cool to have the double-header opportunity with the men at times and have a mix of double-header and single games. Seeing a different brand of basketball in the NCAC than what my conference brought to the table is going to be fun. It’s gonna be an exciting year.

I saw you majored in Psychology. What made you decide to pursue coaching as a career?

I think initially it started as a funny thing where I was like, “I just want to wear athletic clothes all the time.” Coaching seemed like the route to go, I went in thinking I would be a Math major and then when I got to [Calculus], I changed my mind. I thought [that it] wasn’t really statistics or numbers that I was really interested in.

From the psychology aspect, I just really enjoyed the readings. I took an intro class on a whim [my second] year and I realized psychology was the route I wanted to go. I was able to do research in Sports Psychology and Team Cohesion, like how it relates to success. Being able to pursue some extra things and some individual stuff in the sports arena made me realize how helpful that would be in coaching. Again, I think I have always had a passion for basketball and that was so important to me. It was kind of like, “Well, can I make a career of this? If not, figure out what to fall back on.” I just really wanted to pursue coaching, so I tried to work camps and make connections on the coaching side of things.

As someone who has lead many teams to conference playoffs, what do you believe leads to a successful season?

I think it is that combination of really wanting to play for each other. Obviously you have to have the talent, the skilled players that play a role. There doesn’t have to be just one talented individual — it’s coming together, and who has that best group of five at any given moment. If we can get all 14, 15 on board and everyone plays to the best of their ability, I think we can beat teams that are better on paper than us. You need a unique connection with a little bit of luck along the way. At my past institution, we had teams that we should have beaten and it just didn’t come to fruition in the grand scheme of things. We just couldn’t win the game when we needed to. Things kind of fell into place one season when we won an overtime game in the first game of the tournament by knocking off the number-one team in overtime.

Success is not defined by wins and losses. Yes, you’ll remember if we win a championship, but you’re gonna remember the bus rides, you’re gonna remember the connections [you made]. Hopefully, you’ll have a teammate in your wedding someday, or [something of that nature], and stay connected with people. I hope they take away [strong connections] from here in the grand scheme of things.

What are you looking forward to the most this season? What has preseason been about for you?

I think really just seeing how this group gels and comes together because we have so many pieces to be successful. A lot of our season has been trying to connect with them and understand where the culture was at and really where we want to get it to and what we want Oberlin basketball to be about. Just an overall feel when people come to visit, when people talk about Oberlin basketball, what that means and what it represents. I’m just, again, so excited. Every member of our team is such a cool person. They bring something unique and individual to our group, but at the same time, I think we really are unlimited in terms of where we could go this year. Off the court, they definitely have good chemistry, but I think there’s just a deeper connection we can get [if we] make sure they’re playing for each other.