Nuanced Adaptation of “All This Intimacy” Opens in Kander 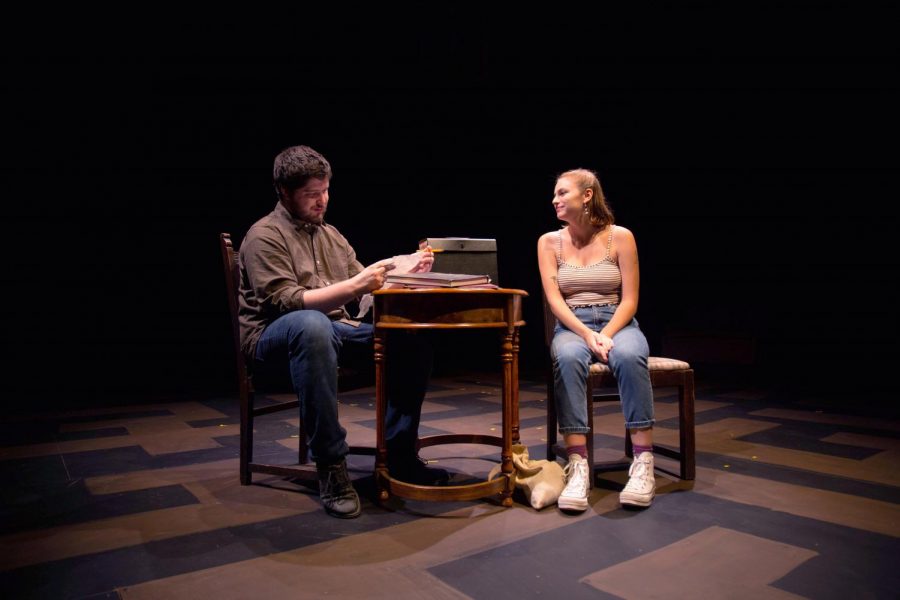 A poet who commits a string of infidelities, conceiving three children with three different women in the process, is certainly an interesting set-up for a student performance. Oberlin’s production of Rajiv Joseph’s play, All This Intimacy follows protagonist Ty Greene through the above events with a re-imagined tone. Brought to life by fantastic performances under the direction of College fourth-year Abigail Bowman, the play is a fundamentally human drama, full of genuine and flawed characters.

All This Intimacy is a notably atypical show for Oberlin. With content warnings ranging from misogyny to pedophilia, it is undeniable that certain aspects of the original text of All This Intimacy read sexist. While aspects of this sexism are still visible in the current iteration of the show, a series of subtle changes effectively shift the show’s overall tone.

“Abigail, the director, is putting a feminist twist on a show that isn’t necessarily [feminist] … she’s trying to do that without changing the lines, and so the content is still potentially demeaning,” said College third-year and stage manager Jenna Hoover.

Although maintaining the original play’s dialogue while changing the nature of the show is a tall order, the student performance of All This Intimacy does so admirably, empowering the women in the show where the original script was lacking.

While billed as a comedic drama, and often performed as a comedy, Bowman’s take on All This Intimacy is certainly more drama than comedy. Bowman gives the women of the show gravity, rather than using them as a punchline. Many moments that might have played for cheap laughs in other productions are instead filled with tension. The anxiety that the characters feel is highlighted rather than dismissed.

“We didn’t change anything in the script, but I really wanted to not make it seem like we were promoting the behaviors of Ty,” Bowman said.

While the original play portrays Ty as a positive protagonist without holding him accountable for his actions, this version of the play certainly turns things around.

“We tried to make a more distinct divide between good and bad,” Bowman said. “I don’t want to say Ty is a villain, I just want to say he lacks the self-awareness required to be a good person in today’s society.”

This more nuanced depiction of the central character highlights the play’s biggest strength: portrayal of a fundamentally human, albeit absurd, situation with real, flawed characters. In its essence, the show is ultimately an examination of what it means to be a bad person. While Ty had little ill intent, the impact of his actions is devastating to the lives of those around him.

“The real damage is done in how he handles the aftermath,” said third-year James Dryden, who plays Ty. “Because he seems to think that because he’s not a bad person, he can’t have done a bad thing. But on the [other] hand, I think it’s important that he’s human, and did make mistakes, but he’s not a bad person, I don’t think he is.”

All This Intimacy articulates a message that is sorely needed in today’s political and social context. Rather than preaching forgiveness, All This Intimacy requests understanding, asking the audience to consider that decisions are often complicated and that mistakes are inevitable from flawed people.

Ultimately, All This Intimacy is neither about light-hearted laughs, nor is it easy and fun to watch. It will likely leave you uncomfortable and disconcerted. However, I would strongly recommend this drama as its wonderful performances demonstrate how we are all, at the end of the day, human.

All This Intimacy runs from Friday, Oct. 11 to Sunday, Oct. 13 in Kander Theatre. Tickets are $5.