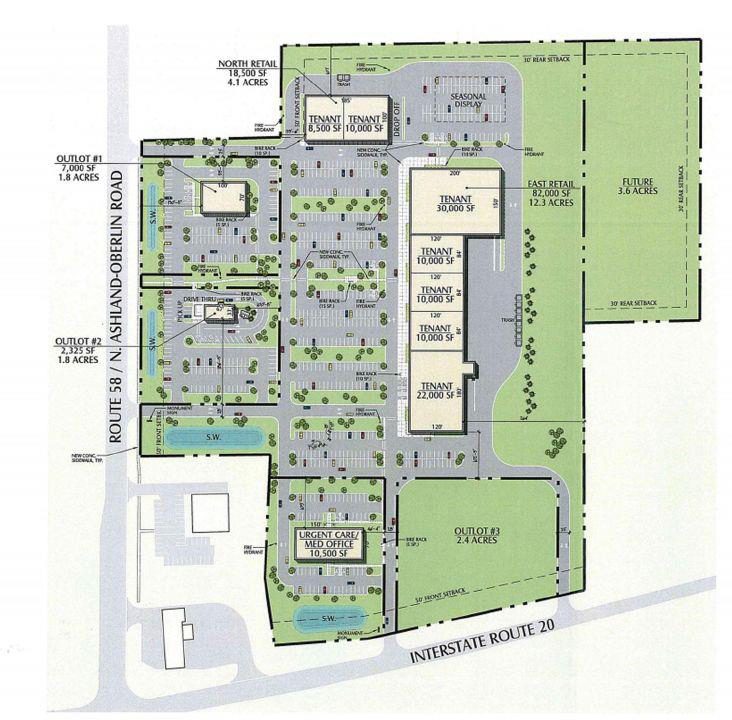 Courtesy of The Chronicle

Carnegie Management and Development Corporation’s initial plans for the proposed shopping center located at the intersection of Ohio State Route 58 and U.S. Route 20

Plans are in motion to develop a 28-acre shopping center at the intersection of Ohio State Route 58 and U.S. Route 20 in Oberlin. The proposition was met with resistance from community members at a City Council hearing on Oct. 21.

The parcel was originally designated for office building development at an Oct. 21 public hearing. The Oberlin Planning Commission recommended that the Oberlin City Council rezone the property as C3, which would open it up to commercial development. City Council was also asked to address the C3 zoning restriction that capped construction at 50,000 square feet. The proposed shopping center is around 120,000 square feet.

City Council President Bryan Burgess explained that the City Council and the Planning Commission initially approved the 50,000 square foot limit in an effort to keep big-box stores out of Oberlin. He said that the effect of this rule was that there was very little building done in that area at all.

“Where the intention of Council and the planning commission 12 years ago was to stop a big-box store, that’s not what’s being proposed here with this developer,” Burgess said. “Even though a single building is going to be 82,000 square feet, it’s actually being subdivided into smaller storefronts.”

Burgess said that in upcoming meetings, City Council will consider passing a new ordinance which will state that a building may exceed 50,000 square feet if the storefronts are 50,000 square feet or smaller. He also spoke about some of the benefits that this development could bring to the Oberlin community.

“The initial estimate from the developer was 350 jobs at an average salary of $30,000 per year,” Burgess said. “The combination of property and income tax was over half a million dollars a year. Split between the city, the schools, and the county — it’s significant.”

Carnegie Development and Management Corporation, based in Westlake, OH, is currently at the planning and research stage of the development process.

“We are still in the process of performing due diligence on the property and working with the city to get everything zoned appropriately,” said Associate General Counsel Jonathan Khouri. “We’re looking for potential tenants, so we’re working with a couple that have interest. And we’re basically going to just continue to go through our internal processes to make sure that we’re doing a project that pencils out and can be supported [by] the Oberlin community.”

Director of Planning and Development Carrie Handy is hopeful that the shopping center can supplement existing businesses downtown.

“As far as competing with downtown, I think that we can get a mix of retail, office, restaurants, whatever, that would complement downtown versus compete,” Handy said. “These offer larger spaces that downtown just doesn’t have. … The storefronts downtown are small; you’re talking a thousand to probably three thousand square feet, and these are all bigger than that. … These types of businesses want this location for the traffic, and they want the parking. … I think they can complement each other. I really do.”

The proposition was met with resistance from community members who spoke at the Oct. 21 meeting. Ben Wisner, a retired professor who has a background in land use planning, was skeptical of the plan.

“I’m concerned that it’s not needed,” Wisner said. “I’m also concerned that we don’t know enough about the company. I can see numerous alternatives in terms of employment and economic and social development of the city.”

“All open land — the fallow field, which was the larger portion of this, and the Woodland, certainly — is permeable,” he said. “It controls rainfall and runoff [that] seeps into the ground. All of it has very important biodiversity roles. … If you’re going to lose that environmental benefit, it has to be offset by a very strong social benefit.”

Handy says that Carnegie Development will first have to submit their site plan to the Ohio Department of Transportation. Afterward, the plan will return to the Planning Commission for approval.

“At that time, we will also look at their stormwater plans,” Handy said. “We have now on staff a stormwater coordinator, so she will be looking at that really hard. We’ve passed a lot of stormwater regulations here in the last year. I think we’re pretty equipped to deal with that issue.”

“They actually modified this plan already to include more green space,” Handy said. “The first plan had a lot of asphalt, and I told them to go back and modify it. We actually have a pretty decent set of design standards for the C3 district, which were put into effect after Walmart came in. That’s why you see a lot of this green space breaking up the asphalt.”

Mark Chesler of Oberlin Citizens for Responsible Development believes that the shopping center is not in line with the Planning Commission’s past work.

“The Oberlin City Council ought to heed the astute, prescient advice of former senior City of Oberlin officials as Carnegie Management and Development seeks to pervert the City of Oberlin Comprehensive Land Use Plan,” read the statement that Chesler shared at the hearing.

Handy said that the comprehensive plan for city development in Oberlin was last updated in 2011 and is now outdated. The Planning Commission plans to update it again for 2020. According to Handy, this parcel is the only one in the city that was designated for office development.

Khouri spoke to Carnegie Management’s business practices and its history with sustainable development.

“We’re an asset-based company, so we hang on to all of our developments, so we don’t ever flip our properties,” Khouri said. “We’re going to keep it and manage the projects for many years to come. With that in mind, we do try to engage in environmentally sustainable practices … There’s a whole slew of different things and a protocol that we go through, and as long as the economics work, then we employ as many as we can. … We’ve picked up a lot of sustainable practices along the way that we just try to work into our commercial developments as best we can.”

Other community members shared their reservations about starting new developments in Oberlin.

“This sprawl, this huge sprawl from the original size of Oberlin, has all happened in the last 30 years,” Oberlin resident Aliza Widenbaum said in a statement during the hearing.

Handy maintains that the development makes sense for this location.

“I don’t consider this sprawl,” Handy said. “It’s already in the city. It’s already got utilities running past it. We’re not going to build any new infrastructure to make it happen.”