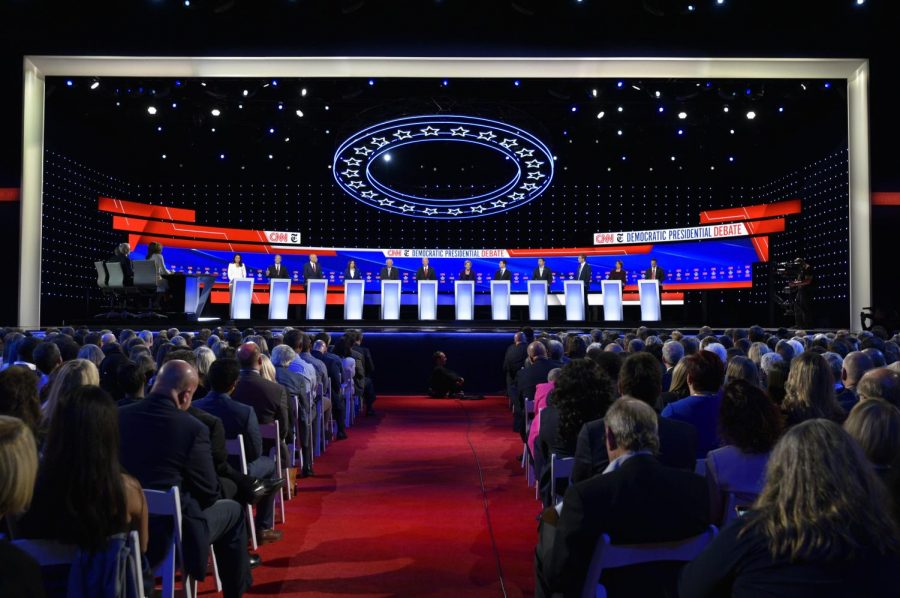 Courtesy of CNN and NYT

Democratic presidential candidates stand on stage at the Oct. 15 Democratic debate, hosted at Otterbein University by CNN and The New York Times.

Twelve candidates for the Democratic Party’s presidential nomination descended on Westerville, OH, on Tuesday, Oct. 15, to take part in a three-hour debate hosted by CNN and The New York Times.

Many of the candidates came out swinging, attempting to highlight ideological divides and set themselves apart from the field. Massachusetts Senator Elizabeth Warren became a lightning rod for critique from other candidates, especially on the issue of health care. Other clashes focused on foreign policy, calls for party unity, and past political records.

Several Oberlin residents and students made the two-hour drive to Otterbein University, the host venue, to watch in person. Among them was Lili Sandler, founder of local activist group Lorain County Rising.

“Myself and my fellow activists across the state were really, really happy when we found out that the debate was being held in Ohio,” Sandler said. “We’ve been told since last year’s election that they are disregarding Ohio … that it’s no longer a swing state.”

In Sandler’s eyes, Ohio is still firmly a swing state. Indeed, several candidates made appeals specifically to Ohio voters over the course of the night.

“You know, this isn’t a flyover part of the country to me,” Minnesota Senator Amy Klobuchar said. “The heartland is where I live. And I want to win those states that we lost last time, and I have bold ideas to get us there.”

Other questions and responses referenced the August shooting in Dayton, OH, lost manufacturing jobs in working-class communities across the state, recent attempts by the Ohio state legislature to curb abortion access, the opioid crisis, and other local issues.

“It seemed like a pretty clear attempt to appeal to the Midwest more,” said Faith Ward, College second-year and co-chair of the Oberlin College Democrats, who also attended the debate. “[It juxtaposed] how [former Secretary of State and Democratic presidential nominee Hillary] Clinton did in 2016 and what they need to do now, or what they think they need to do.”

“I found that a lot of times … it felt like they were just inserting ‘state name here,’” Sandler said. “A lot of the times they were saying, ‘Well, as you know, in Ohio’ … they could have just as easily said Iowa, or North Carolina, or Florida.”

Bridget Smith, a College third-year and Ward’s counterpart at the helm of the OC Democrats, felt that efforts to highlight local issues were largely successful.

“I think that the candidates, or more so the moderators, did a good job of creating a balance between Ohio-specific topics and more broad topics,” Smith wrote in an email to the Review. “The candidates had obviously prepared to answer questions about the opioid crisis and the degradation of the manufacturing industry, but several candidates, such as Andrew Yang, went out of their way to talk about conversations they had with local Ohioans and discussing their needs.”

While Smith felt positively about how the three moderators — Erin Burnett and Anderson Cooper, both of CNN, and Marc Lacey, of the Times — introduced Ohio-specific topics, many, including Sandler, walked away unimpressed.

“It would’ve been nice to see them come up with some new questions,” Sandler said. “It seems like at each of these debates we keep hearing the same things, and we’re not really varying from that.”

“We are lucky enough to attend an institution that pushes us to be politically active,” Smith wrote. “I hope that as we approach the 2020 election, students find the time to support their connections outside of Oberlin in learning more about local, state, and national political issues and candidates.”

Sandler said that Lorain County Rising will also focus on education and outreach as the election gets closer.

“We’ll be doing all the regular things,” Sandler said. “We’ll be knocking on doors, we’ll be making phone calls. We’ll be encouraging folks to make donations and to do everything they give it they can to get as many Ohioans to vote as possible.”

The next Democratic presidential debate will take place Wednesday, Nov. 20 in Georgia, and will be co-hosted by MSNBC and The Washington Post.