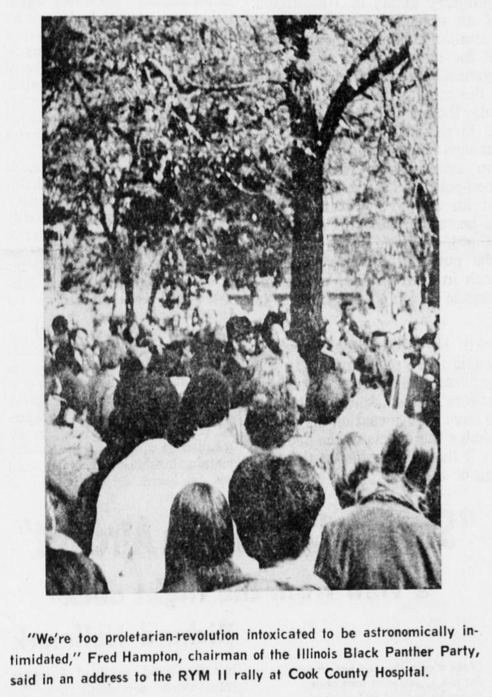 Students gather at a 1969 rally in support of the Black Panther Party.

Editor’s note: This column is part of a series that will focus on Oberlin’s history as a town and an institution. The series will be published regularly throughout the fall semester.

Over the course of just a couple weeks in the spring of 1970, Oberlin students heralded the first Earth Day with a series of campus speakers and workshops, held an anti-war protest following a national address by President Richard Nixon, and mourned the traumatic deaths of four Kent State University students at the hands of the Ohio National Guard just an hour down the road.

It was one of the most politically- and emotionally-charged moments this campus has ever seen. A confluence of issues was at the forefront of the community’s consciousness, from the war in Vietnam to the persecution of the Black Panthers at the hands of the federal government; from the smoothing of town-gown relations within Oberlin to the mounting environmental crisis that increasingly captured the nation’s attention.

While all of these issues had their own nuances, they were all interconnected for the Oberlin community — and had been for some time. Illustrating this synergy, the Class of 1969’s commencement gift the previous spring took the form of donations to four different causes. One, the creation of a pollution filter for Oberlin’s Service Building. Two, a local day care center. Three, a scholarship fund for high school seniors in Gary, Indiana. Four, the defense fund for Black Panthers indicted in New York for conspiring to bomb police stations and a department store.

During that same school year, students were also involved in protests of the Oberlin Police Department, following conduct that they felt was discriminatory — demonstrations that would peak in the days following the Kent State shooting, after Oberlin’s faculty decided to shut down traditional classes for the remainder of the academic year. On the whole, students had a strong sense that their political responsibilities extended beyond the confines of the campus.

Still, despite this strong consciousness that existed on campus prior to the spring of 1970, it’s clear, both in hindsight and from examining the Review’s archives, that nobody in Oberlin or elsewhere was prepared for the whirlwind that spring would bring — a whirlwind that would push many on campus to consider Oberlin’s true mission in an ugly, violent world.

That process of soul-searching made several things incredibly clear. First, that local and national issues could not be truly understood in siloes. Oberlin’s anti-war activism alone made this plain. The night of April 30, after Nixon addressed the nation about military action in Cambodia, hundreds of students held a campus-wide protest which concluded in an occupation of Cox Administration Building that lasted into the early hours of the morning.

The Cox occupiers presented Acting Provost Ellsworth Carlson with a resolution they wanted the College to endorse. The first two items on the resolution called for troops to be withdrawn from Vietnam immediately and for the legal proceedings regarding the New York Black Panthers to be paused indefinitely, until fair trials could be assured. In the minds of the protestors, these two issues could not be separated; success on one front would not be a victory without accompanying success on the other.

Similarly, campus programming for the first Earth Day represented the vast number of interconnected issues that contribute to a global environmental crisis. Speakers focused on a range of topics that fell outside of the day’s hippie reputation, including water and air pollution, space and land use, and more. Oberlin was talking about environmental challenges for urban communities, not just for rural or ‘natural’ areas — a progressive stand for the time.

The second important realization to come from this brief but important moment in Oberlin’s history was that faculty and students are often joined by more than what separates them. This became particularly evident in the wake of the horrific Kent State massacre, which fell closely on the heels of the anti-war, pro-Panther Cox occupation.

Following the students’ lead, the College agreed to shut down for the rest of the semester and focus on how to respond to the tragedy that took place just over an hour down the road. It was a difficult and debated decision, but one that led to greater unity between students, faculty, staff, and administrators than had existed in the years prior to the shooting. And in the weeks following, when students left the classroom and stepped out into the world to speak their truths and values, they found many of their professors right alongside them — marching, demonstrating, making their voices heard.

For some faculty, it was an unusual yet extraordinarily powerful moment.

“To those who would claim that these weeks had nothing to do with education, I would request that [they] discuss the subject with those who were here,” wrote Assistant Professor of Music Theory and Composition Randolph Coleman, in a May 23, 1970 public letter to the Review. “Students have frequently argued that it was the most significant educational experience of their lives. We were coping with real problems not theoretical abstractions, albeit many of us now appreciate these abstractions in a different light after seeing some of their potential applications.”

While the campus climate today is not as fraught as it was in May 1970, we again find ourselves in a tense, dangerous political moment. The challenges we face — the rising tide of climate change, racialized police violence, an epidemic of school shootings, and many others — closely mirror those faced at the launch of the 1970s. And, as they were then, all of these issues are linked — they cannot be tackled in isolation.

The headline of the Review’s 1970 commencement issue read simply, “An End to ‘Business as Usual.’” They meant it, and they made something of a moment that may have otherwise felt overwhelmingly tragic and complex.

Looking back, the campus’ reaction seems perfectly reasonable and, indeed, inevitable. But in reading the Review’s coverage of that time, I can imagine that those decisions felt anything but safe. What can we learn from the courage this school had in that moment? Can we find it again in our present day?