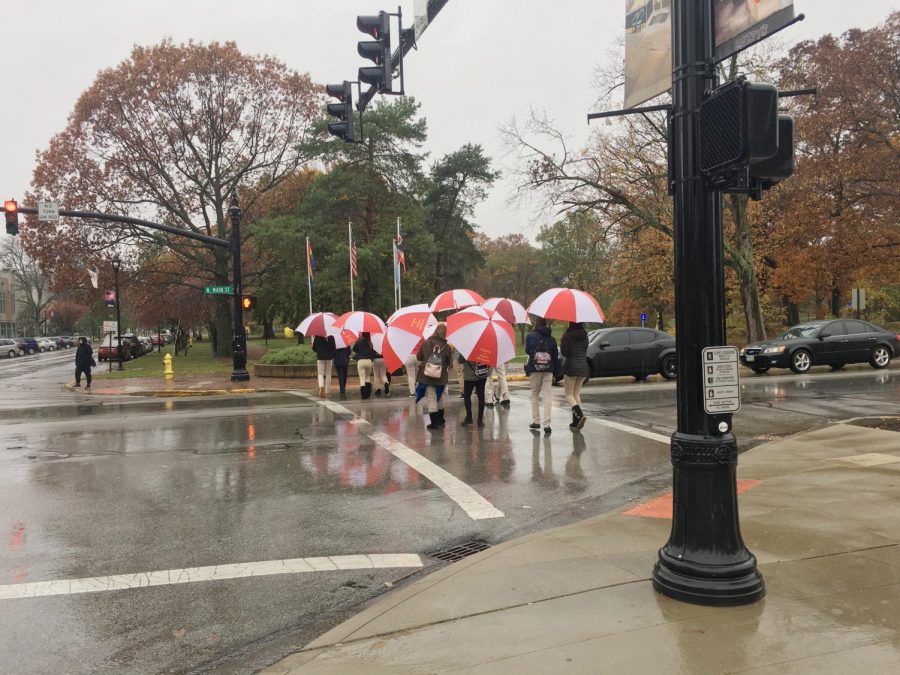 A tour guide leads a group on a campus tour. Demographic factors are impacting admissions strategies at colleges and universities across the country.

Oberlin’s enrollment grew two percent this past year, from 2,785 students last year to 2,846 this year, making it one of three private colleges in the region to experience growth amid shrinking enrollments at colleges and universities throughout Northeast Ohio. This increase in enrollment was accompanied by a higher acceptance rate.

“We are in a time of real change in admissions and enrollment in higher education,” Vice President and Dean of Admissions and Financial Aid Manuel Carballo wrote in an email to the Review. “Many schools have seen both a drop in applications and in enrollment over the last couple of years.”

Part of this changing landscape is the shrinking size of the prospective applicant pool.

“Fewer students are graduating from high school, particularly from our feeder states,” Carballo wrote. “We are seeing increased competition, not just from peer schools, but also from state schools providing honors programs that mimic the environment at liberal arts institutions.”

This year’s acceptance rate of 40 percent is the highest rate since 2004, and is the result of several factors, including the size of the applicant pool.

Carballo emphasized that enrollment is not the only factor that the College looks at in evaluating admissions outcomes. Oberlin operates under a need-aware system for admissions, meaning that the College weighs how much tuition a student’s family will be able to pay in deciding whether to admit that student.

“After two years of missed enrollments, we have met our headcount for College and Con the last two years, but continue to look at our net revenue targets as well in a model that is highly tuition-dependent,” Carballo wrote.

Despite varying acceptance rates, enrollment has remained relatively consistent from year to year; since 2009, undergraduate enrollment has ranged from 2,961 in 2014 to 2,785 in 2017. Further, Carballo maintains confidence in the academic abilities of each incoming class.

“I would highlight that we’ve been able to maintain a similar admit and enroll profile academically for students over the last 5 years,” wrote Carballo.

Since 2015, Oberlin’s admit profile has maintained a consistent average GPA of 4.1 weighted, 3.7 unweighted, and an average ACT score of 32, with the exception of 2017, when it dropped to 31. Academic statistics for enrolled students are similar: 4.0 weighted, 3.6 unweighted, and 31 ACT.

College fourth-year and Senior Admissions Fellow Monica Dix says that part of the pitch she makes to prospective students is the way that Oberlin prioritizes experiential learning. In particular, Dix cites her own experience running a lab space — a privilege not generally given to undergraduate students at larger institutions.

“This hands-on engagement is something that has really fostered an incredible depth of experience,” Dix said. “That’s not the kind of thing that you’d experience at a big state school or at a school with less resources.”

According to a study conducted by the National Student Clearinghouse Research Center in spring 2019, institutions of post-secondary education across the United States experienced a collective loss of enrollment by 1.7 percent. The subgroup “Liberal Arts and Sciences, General Studies and Humanities” was hit the second hardest, with a decrease of 7.1 percent to undergraduate enrollment — second only to Personal and Culinary Services, which faced a 16.7 percent decrease.

In an article for The Chronicle of Higher Education, Vice President for Enrollment and Student Success at Trinity College Angel B. Pérez comments about these changes in college admissions processes across the country.

“The enrollment game is fiercely competitive, and every college plays it — which means that every college will have to decrease its dependence on traditional enrollment,” Pérez wrote (“The Definition of Insanity,” October 2, 2019). “In short, colleges must be willing to radically reimagine their business models. This does not mean redefining who they are and what they do; it’s about doing new things.”

Ultimately, it is unclear whether this year’s increase in enrollment and decrease in selectivity is an expected fluctuation in admissions statistics or a permanent trend that will impact Oberlin moving forward.