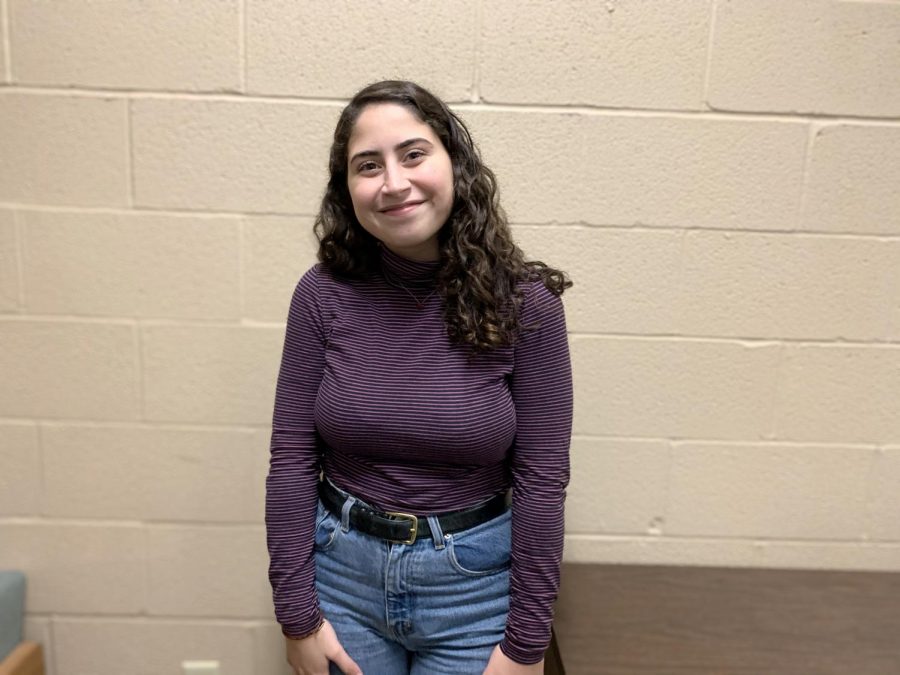 College third-year Rania Ziar is excited to start her third season on the varsity women’s lacrosse team after dealing with various injuries that have kept her sidelined for multiple seasons. Despite her setbacks, she has remained spirited and determined both on and off the field. She is a Neuroscience major on the pre-med track with a minor in Middle East and North Africa Studies. In her free time, she works with Professor Gunnar Kwakye in a neurotoxicology lab and as a Peer Advising Leader. Raised in Chicago, she is also a Posse Scholar.

How long have you been playing lacrosse?

I started playing lacrosse my sophomore year of high school, and I’ve been playing ever since.

What is your favorite aspect of the sport?

I love being on a team, and I also love the way that playing makes me feel. It’s a cool community building sport and really lifts you up when you’re feeling down.

How has being part of the team shaped your overall Oberlin experience?

Outside of athletics, what are your other interests?

Outside of athletics, I do research in a neurotoxicology neuroscience lab. We work with neurodegenerative diseases and look at the effects of environmental toxicants on conditions such as Huntington’s disease and Multiple System Atrophy.

Do you see overlaps in the various communities that you’re a part of on campus?

Wherever you go, community is always really important, whether it’s athletic or cultural. The communities that I’ve built up in both my religious and cultural clubs and my athletic team have both been really important in helping me grow into the person that I am today. I do see a lot of overlap in the sense that they both provide a sense of home that I’ve missed.

How does fasting during Ramadan affect your athletic abilities, and how do you balance both?

Ramadan has been falling after our season is over, so I haven’t really had to deal with it while I’m in season. However, when I was in high school and playing over the summer, I would still have to go to practice. The point of Ramadan is to make you grateful for what you don’t have and what you do have. I would just be really tired, but it also made me so much more grateful to be an athlete because I realized that there are people who don’t have that.

What do you enjoy about being a PAL?

I love PAL! In high school, I also worked with mentoring first-years, so it’s something that I’ve always been really interested in. As a first-generation student, it’s been hard for me to acclimate to college. I really wanted to help other people who may have had the same experiences as me. It’s always good to have a mentor that you can look up to, and I enjoy being that for other people because the people who have done that for me have been so important.

Could you speak on what it means to be a Posse Scholar and what it is like to have that cohort on campus?

Posse is a high-school scholarship that covers tuition for all four years of college. The concept is that you come in with 9 or 10 other people that are part of your “posse” who help support you throughout your college experience. You also get a mentor, who’s usually a professor or an administrator on campus who is there for you. My posse has probably been the most important group of people because I see a lot of myself in them. We’re all from Chicago, and we come from similar backgrounds and experiences. With a lot of people on this campus, it sometimes feels like they don’t understand me, so my Posse cohort have been important people for me to turn to for support — they’re my backbone on this campus.

What are you looking forward to next season?

This is going to be the first season that I’m back playing completely healthy, which is really important to me because I haven’t really been able to play for two years. I’m really excited to have that experience both on and off the field. I haven’t really felt as though I’ve been able to play to my full potential, so I think that this season will be really important for me and for the team. I’m also really excited to potentially win a [North Coast Athletic Conference] championship.

What has held you back from playing to your full potential?

Sophomore year of high school I tore my ACL, even though I had only been playing lacrosse for about a month. In between the time that I tore it sophomore year of high school and the time I got here, I tore it again, but I had no idea. So I was still playing on it. Then when I got here, I completely blew my knee during our first fall ball tournament, tearing my ACL, MCL, and meniscus. I continued playing on it and eventually also flipped my meniscus. So I was really out. I got surgery in March of my first year, and I’ve been working to get back to playing. It’s taken a really long time, but I’m really excited to be where I am today.