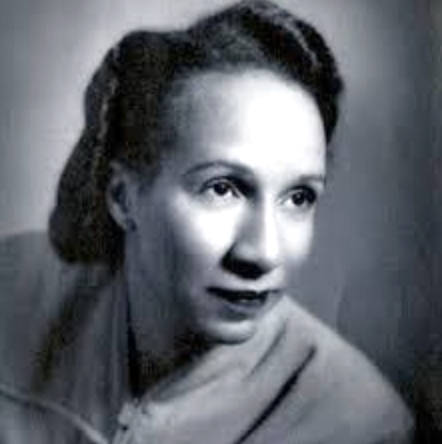 In February 2018, two Oberlin professors ran into each other in the archives and realized that they were both researching the thesis of the same highly-accomplished Oberlin alumna. Visiting Assistant Professor of Ethnomusicology Fredara Hadley and Assistant Professor of History and Comparative American Studies Tamika Nunley were both inspired by the life and work of Shirley Graham DuBois, OC ’34, and at Nunley’s suggestion they decided to craft a class around her tremendous accomplishments in music, activism, history, and literature.

“This thesis is really her conceptualization of African-American music as being very expansive and broad-reaching into lots of classical forms of music, and seeing those connections more broadly across the African diaspora,” Nunley said. “Fredara and I thought it was really phenomenal [and] innovative of her to even think along those lines, and it is rooted in her training as both a historian and a composer.”

DuBois was an ethnomusicologist who studied music at the Sorbonne in Paris and, inspired by the African and Afro-Caribbean musical culture there, later returned to America and earned both a B.A. and a Master’s degree from Oberlin. While at the Sorbonne, she began her opera, TomTom: An Epic of Music and the Negro, which went on to be performed for thousands of people in Cleveland. She also wrote multiple plays and books, in addition to joining the organization Sojourners for Truth and Justice and becoming a director of the Chicago Negro Unit of the Federal Theatre Project. Eventually, she married W. E. B. DuBois.

The first step in making the campus aware of this incredible woman and her connections to Oberlin was Nunley and Hadley’s StudiOC cluster class offered this semester, The Student as Artist and Intellectual: Gleaning from the Legacy of Shirley Graham DuBois.

“The [theme-based] learning communities of StudiOC are designed to bring together [Conservatory] and College students and … faculty,” Hadley said. “It was perfect because I’m in the [Conservatory] and Shirley Graham DuBois [did her graduate work] in the Conservatory, and she also got a [Bachelor] degree in history, which is Professor Nunley’s department. So it felt like we were well-balanced to bring an in-depth look at her life.”

On Tuesday, the Conservatory hosted a Shirley Graham DuBois Salon in Stull Recital Hall, celebrating her work and life and giving a glimpse of upcoming events centering on DuBois.

“We felt like she was really not extensively researched and talked about in the academy, and when you compare that to her husband W. E. B. DuBois … there’s definitely a disparity there as to the kind of scholarly treatment that she receives and the scholarly treatment that he receives,” Nunley said. “We thought it was a really wonderful opportunity [to] begin to understand and contextualize her life and work, and why Oberlin was really instrumental in getting that work off the ground.”

Years after her time at Oberlin, DuBois and her husband moved to Ghana, a country they loved and the place where they would eventually be buried. It was important to Hadley and Nunley that their scholarship be thoroughly connected with folks researching DuBois in Ghana, and with the DuBois Society there. A trip there this summer helped them cement those connections and crystallize their intentions in their syllabi.

“In a lot of ways Ghana represents an opportunity for her to use all of the skills that she’s gathered along the way — as a composer, as a writer, as a coalition builder,” Hadley said. “[Thinking about it that way] helped me to better understand what I wanted to convey to students, and how I wanted that to shape my syllabus, and what I wanted them to walk away at the end of the semester knowing about this woman.”

Nunley based her syllabus around digital archives of history and the humanities, while Hadley wanted to examine the way that creative and academic pursuits are in constant conversation with current events. Both classes have a number of College and Conservatory students, and will culminate in students crafting chapters to be included in a book of information on DuBois’ life.

“Scalar is a new software that we’re using that allows you to build a book,” Nunley said. “But what’s awesome about it is that it’s an interactive book, so as you click to the next page you can click into the document and experience sound, or experience images, or see a piece of the archive in that. What I like about it is that it allows students to author their own analyses and contextualizations of Shirley’s life, but not in the traditional format.”

For the remainder of the semester, Nunley’s students will also be working on exhibition panels for display in the Mary Church Terrell Main Library in the spring — similar to those on Mary Church Terrell and the Sanctuary Project — that will be embedded with QR codes for their digital book. After the semester ends, these transportable panels will be shipped to Accra, Ghana, for display and use by the DuBois Society.

Students will get to premiere their book during a symposium on DuBois’ work on Feb. 27 and 28, 2020. The first staging of DuBois’ TomTom since 1932 is tentatively scheduled for December 2020, to be directed by Professor of Theater and Africana Studies Caroline Jackson Smith.

Preceding these two larger undertakings, Hadley described this week’s salon as a first re-introduction of DuBois’ legacy into Oberlin campus life. The salon included performances of selections from her opera by Conservatory fourth-years Anthony Anderson and Matteo Adams, an analysis of her compositions by Daniel Spearman, OC ’16, and a talk on the play’s progressivism by Jackson Smith, in addition to other speakers.

“We wanted to do something public-facing while we had the course going, and [DuBois] was a part of salon culture in both Paris and Harlem,” Hadley said. “So it felt like a really great way to start introducing her to the broader campus. … A salon is more intimate [and] more informal.”

Adams was moved by the handwritten text of TomTom, and the importance carried in performing a selection from this play that hasn’t been staged in nearly a century.

“You have to really delve into the text,” Adams said. “I don’t think I would have been able to look at the handwritten score and just sing it without having understood the rest of the opera, because that’s the premise of what we do as performers. We have to do our research into the history [of] what we’re actually performing in order for the audience to understand it.”

This convergence of history and artistry carries DuBois’ legacy into the current moment, and represents the vitality of studying her work.

“Shirley Graham DuBois is a quintessential Obie,” Hadley said. “I think she loved Oberlin, and she represents so much of what all of us try to do well here as faculty, students, and staff. We like to think that we train young people who can go out and change the world … and she does that many times over.”