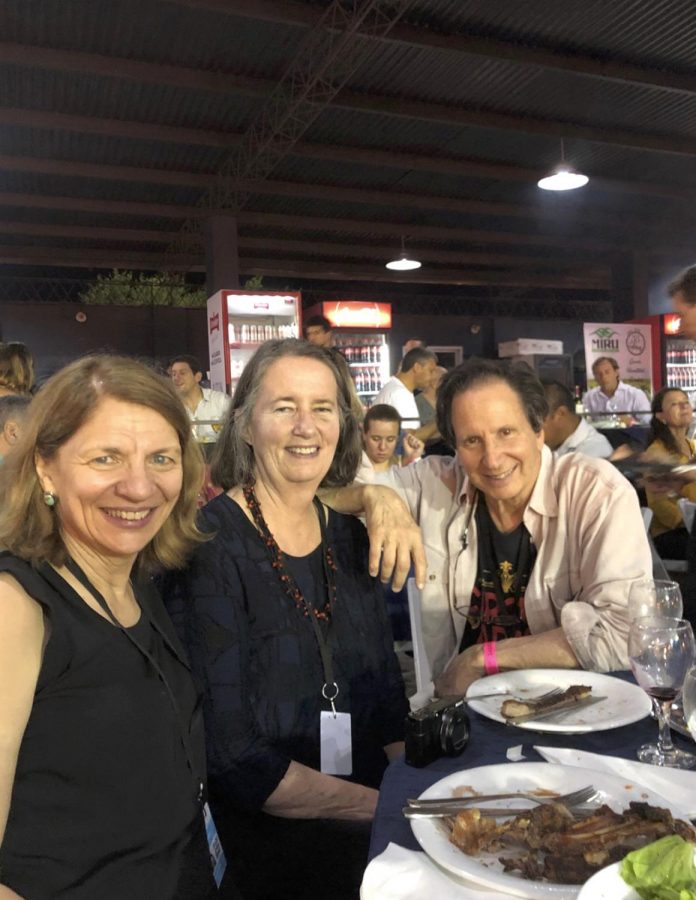 Steve Zeitlin and Amanda Dargan directed In the Moment: Poetry Duels and Improvisations from Around the World, a documentary film that screened on campus last Tuesday. Professor of Hispanic Studies Ana Cara sponsored the screening. The film, spanning a 20-year body of work, explores different histories and traditions of poetic improvisation around the world. All three have Ph.D.s in folklore from the University of Pennsylvania. Zeitlin and Dargan are the respective Founding Director and Education Programs Director of Citylore, an organization based out of New York City that focuses on the preservation of cultural heritage. Beyond her professorship in Oberlin’s Department of Hispanic Studies, Cara is also a prize-winning translator for various works of Jorge Luis Borges.

These interviews have been edited for length and clarity.

How did your interest in folklore develop, and how did that inspire the creation of this film?

Amanda Dargan: We both had started doing some projects that involved improvisation. I was creating a short documentary about an artist who does henna for weddings. When the bride comes, she gets her hands and feet done with henna and it takes hours and hours, and so her friends come and they improvise lyrics about their friend and the person she’s about to marry. They’re banging pots and pans and it’s a very funny, raucous thing. I loved that and I have always been interested in improvisation in that way. It was interesting to see the settings in which that kind of improvisation takes place.

Steve Zeitlin: I have a longstanding interest in verbal art. One of the things that actually got me into folklore was coming across a book on the folklore of New York City and it had children’s rhymes collected by a folklorist named Benjamin A. Botkin. I remember one of them which goes: “I should worry, I should care, I should marry a millionaire. He should die, I should cry, I should marry another guy.” And I thought, “This is such a great piece of folk poetry.” I thought, “This is a perfect job for me, going around and collecting work like this.” I mean, who thought you could make a living doing something like that? After working for a number of years with Poets House, a literary institution, we started to realize that there are improvised poetry traditions in all different parts of the world. Then we began to go places where there were improvised poetry traditions and started recording them.

Ana Cara: Folklore is a huge field, but what interests me is the relationship between traditional verbal art and literature. I work primarily on Latin America, and I’m originally from Argentina. So all those factors led me to studying the traditional verbal art of the pajadores, verbal duelers [who] improvise poetry and feel a great sense of pride and ownership of Argentinian tradition by virtue of being able to improvise their poems. When I was in graduate school, I met Steve and Amanda. When they decided to make this film by bringing together … pieces of their work from different moments over the last 20 years, they asked me about going to Argentina and filming some pajadore artists. We ended up doing that together and capturing some film.

How would you define folklore?

AC: The term folklore was instituted in the 19th century, but that doesn’t mean folklore started then; human beings have had folklore since the beginning of time. The term has been batted back and forth by scholars … over decades. It’s a strange term because in some ways, when you use it people immediately assume that you’re talking about old-timey stuff that’s rural or non-written. That’s not necessarily the case in the 21st century — folklore is being made daily. So the question is, “What are the crucial elements for folklore?”

A definition that I have gathered from numerous definitions of folklore is that folklore is traditional art shared by a community. It has a historical dimension or has existed over time. It’s also shared by the community in the sense that it’s pertinent to the values and practices in the everyday life of a particular community.

In terms of the film, it was fun to bring together a filmmaker and somebody who’s an expert in this tradition and the performers themselves and try to create a context in which it seemed appropriate for them to be filmed. There is this question that any field worker faces — or any ethnographer — when you’re representing a culture, when you’re writing [about] a culture, when you’re filming a culture, the constant question: Am I representing this as that culture itself would want it to be? And there’s no single answer.

How will the film impact the study of folklore in the future?

AD: We don’t like the idea of finishing it because it’s sort of our lifetime project. So what we’ve decided to do with it, I think, is good. In the film you see each tradition separately. We come back to them sometimes, but basically there was a piece about each tradition and we created a web page on the Citylore website that has each tradition separately and translations and references for people who want to do research. There’s more information about the forms that they’re improvising with that can be used by educators.

What place does oral culture and folklore have in today’s society?

AD: It’s a time when the virtual world has come to be so that people are constantly on their phones. In some ways, folklorists have continued to do pretty well compared to, let’s say, … all the taxi drivers [who] are going to be put out of business by artificial intelligence. I think part of it is that people need that connection to real traditions that are happening today, but also what has been documented in the past.

SZ: There is still this face-to-face, intimate sharing between people that’s a part of folklore and I think young people long for that too, and so it has kept its importance. It’s kept its audience [that] you would think would be disappearing.

AC: I think that where folklore shows up is in everyday interactions. I’m sure that there are words that have meaning for students that are not necessarily officially in the dictionary and have become code for certain things that would fall under folklore. Stories may circulate about how one does things at the library or things about professors and … in some ways we don’t think about those things as folklore. Folklore has a lot to do with how people in relationships speak to one another.