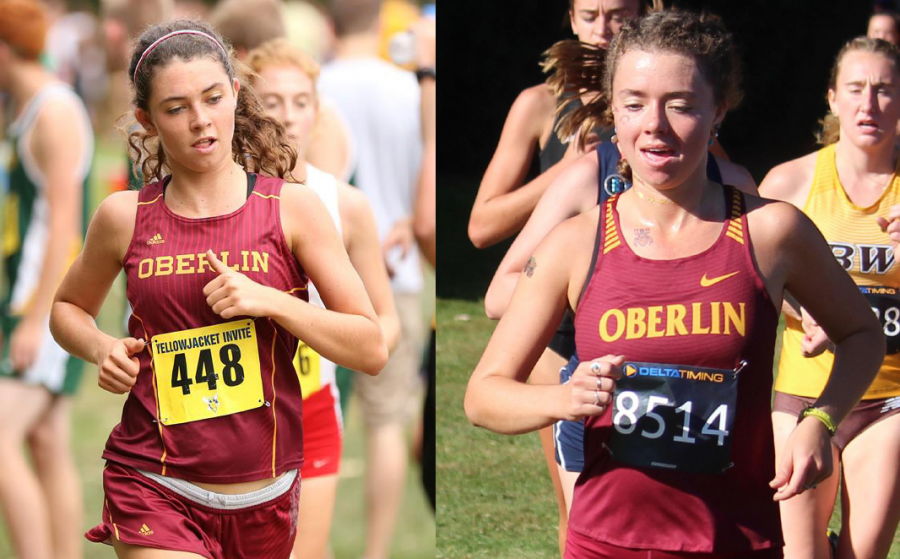 College first-year Lilly Crook walked into Perlick Commons on Tuesday morning wearing a long, flowing yellow dress with a floral pattern on it. She laughed and said, “Marija will probably be late.”

A couple minutes later, she laughed again. College fourth-year Marija, her older sister and cross country teammate, entered the room wearing a long and flowy red dress with a floral pattern on it.

“We don’t usually do this,” Lilly said. “Everyone always says we look so alike, but we usually don’t dress the same too.”

The sisters don’t have other siblings, so they were particularly close growing up. According to them, they’re so close that one time they got in a fight over whether they were friends or sisters. Lilly said she assumed they were friends, but Marija insisted they were sisters.

The Crook family lived overseas in Armenia for four-and-a-half years, so when they returned to the States, Marija and Lilly’s parents forced them to engage in a number of recreational activities to make friends and get involved in the community — one of which was running. Their parents were casual joggers who ran with the Hash House Harriers, an international group of running social clubs. They went on hash runs, which involve getting tipsy before going out for a group jog. Hashers refer to their community as “a drinking club with a running problem.”

Their dad dragged the kids to a community running group that met on Tuesdays and Thursdays, and the sisters have been running together ever since.

“I don’t think I was as fast as a freshman in high school [as I am now as a first-year in college], so Marija and I were on more separated parts of the team back then,” she said. “I don’t necessarily go to Marija with all that much, but having her here is really nice.”

Despite their close relationship, Lilly insists that Marija isn’t the reason she chose Oberlin — in fact, being at the same school as her older sister is why she almost didn’t come here.

“For years I said the only school I wouldn’t go to was Oberlin,” she said. “I was going to find the school that was the most like Oberlin, but wasn’t Oberlin. After a while I realized that there wasn’t a school like that in existence.”

Marija said she always thought her sister would end up at Oberlin. In fact, their high school — Chapel Hill High School in Chapel Hill, NC — has been represented on the Oberlin cross country and track and field team for several years. The most recent Chapel Hill HS alums to roll through Oberlin are Rosie Kerwin, OC ’19, the Crook sisters, and current teammate and College third-year Maeve Gualtieri-Reed. Marija said she suspects the two schools are connected because Chapel Hill has a social environment comparable to Oberlin’s.

While Marija was abroad in Senegal last spring, she advised Director of Cross Country and Track and Field Ray Appenheimer to bring Lilly to campus so that she could get a feel of the school without any biases.

“I wanted her to come, and I thought she would really like it,” Marija said. “I thought last spring would be the perfect time for Lilly to visit, because [my being here] was the biggest hurdle for her in regards to whether she would decide to come here. She didn’t want to invade my space.”

The sisters don’t spend much time together outside of athletics. They live on different ends of campus and have different interests. Marija is a Politics and Environmental Studies major, Preventing and Responding to Sexual Misconduct trainer, and eats in Harkness; Lilly, on the other hand, is into printmaking and doesn’t have an intended area of study yet.

However, once they step up to the starting line at a race, the sisters are the best of competitors. Marija placed sixth in the NCAA Great Lakes Regional Championships last Saturday with a career-best time of 21:29.48. The next Oberlin runner to finish was her little sister, who came in 17th with a time of 22:01.54 — slightly faster than what Marija ran at regionals as a third-year (22:48.9).

Lilly was named the 2019 North Coast Athletic Conference Women’s Newcomer of the Year after posting the top individual finish by a student-athlete in their first year of collegiate competition. She became the seventh women’s runner in Oberlin history to earn the award and the first since Marija won in 2016.

“I think what you see with Lilly and Marija is what you want to see with every teammate,” Wargo said. “Both bring so much joy and excitement to the team, you’re always a little happier when you’re around them. Their work ethic is [impressive] — there’s been a handful of races this year where they finish just a second or two apart. [And] there’s no malice [between them]. Each clearly wants the other to be their best self.”

Although Marija’s cross country career will come to a close this weekend, the sisters look forward to racing together one last time at nationals tomorrow in Louisville, KY. It will be Oberlin’s eighth nationals team appearance in the last 11 years.