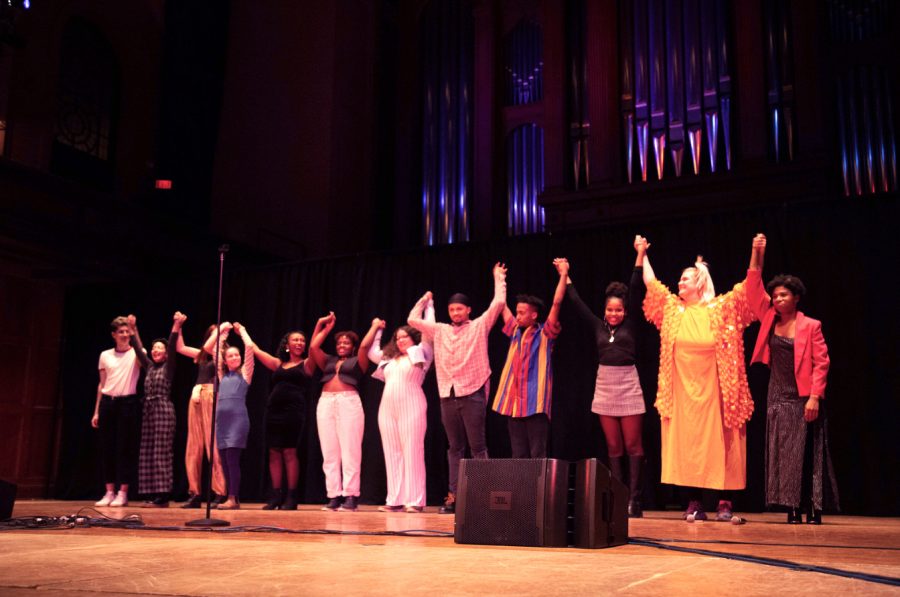 While all students are invited to attend campus concerts and events, it is important to be mindful about taking up space at shows centering Black and Brown artists. Two groups on campus – The Oberlin Hip Hop Collective and Oberlin’s slam poetry team, OSLAM, not only center performers of color but seek to create a safe space for students of color in the audience. When attending these events, mindfulness of one’s positionality is crucial.

“[OHOP’s work is meant to] provide a space where Black people and POC in general [feel] welcomed and encouraged to attend on campus, especially in the ’Sco because it has traditionally been very white all the time,” said College fourth-year Amari Newman, who is also a member of the OHOP board. “We wanted to create events that would offset this tradition.”

The organization not only hosts musical events, but also amplifies many other forms of artistic expression and fosters community around them. Last February, OHOP also hosted Melanin Mondays, incorporating the rich history of Black artistic traditions into the space on a weekly basis. This year, OHOP has brought Black artists like UMI and Suzi Analogue to Oberlin, so that students of color can enjoy music and voices created with their identity in mind.

OSLAM embodies this same idea in prioritizing POC voices and experiences. OSLAM remains a space for people, especially Brown and Black people, to speak about pain and oppressive structures that have historically kept isolated individuals from speaking up.

“OSLAM has taught me so much about community, strength, love, support, and resistance,” said College fourth-year and OSLAM officer Amy Sahud. “This team [has] not only given me a bigger voice, but it also has given me better ears. Being an officer of OSLAM is not a responsibility I take lightly, and I hope to contribute to the legacy of care, joy, and strength that many of us hold very dearly on this campus.”

At the beginning of each performance, members of OSLAM recognize the history of the art form, verbally acknowledging that slam poetry is rooted in Black arts and expression. Everyone is responsible for holding the knowledge that this event is meant to center Black and Brown voices. These practices not only prioritize accountability, but also can help cultivate a space to which students of color feel comfortable returning.

“OSLAM was created by two black women, Annika Hansteen Izora and Nina Austin, and they have created a space for all those things through the centering of Black and Brown voices,” Sahud said.

Staying attuned to group energy in a space is crucial, as is checking in with anyone who might seem uncomfortable. To ensure that audience members are comfortable in the space, OSLAM uses tap-out people to serve as active listeners during the event and provide support to those who need it.

This weekend, OSLAM will host their Grand Slam. At this event, OSLAM poets will perform their work in two rounds, and the top-scoring poets will earn spots to compete at the College Unions Poetry Slam Invitational. While the event is open to all students, it is one that will center Black and POC voices, in keeping with previous performances. At this upcoming event, it’s important to be mindful of one’s positionality.

“Activism is not only organizing and educating, but also the hard work of decolonizing our minds and hearts,” Sahud said. “We must feel, we must heal, and we must grow.”

The OSLAM Grand Slam will take place on Saturday, Nov. 23 at 8 p.m. in Finney Chapel. Tickets are $5–10 on a sliding scale and will be available for purchase from OSLAM members around campus prior to the event, as well as at the event. No one will be turned away due to lack of funds.