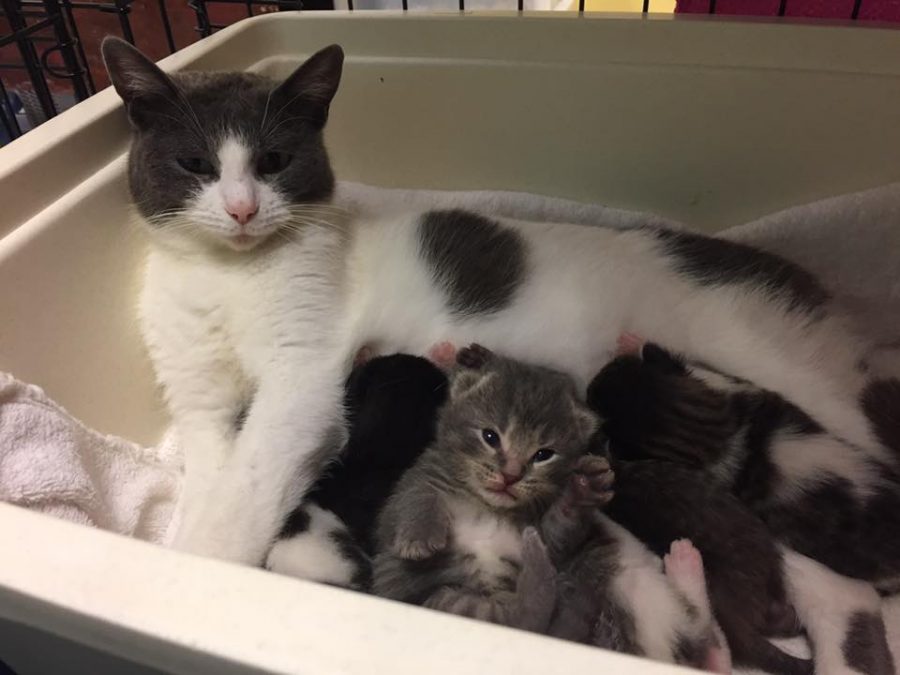 A mother cat and her kittens. CATSS provides care for younger animals at Ginko Gallery & Studio, and for mature cats at their Lincoln Street location.

College towns seem to be dumping grounds for folks looking to get rid of their pets — whether because of turnover in students and staff, or because such communities often come together to care for animals. Oberlin has its own share of feline friends, sometimes seen on campus in colonies or dashing down the street. As the weather grows colder, seeing these cats outside can seem grim. Concerned citizens can be comforted, though, by the knowledge that Oberlin’s feline inhabitants have an extensive network of support on behalf of a volunteer organization called Community Action To Save Strays, or CATSS.

“We have been working within the Oberlin community for about 20 years now,” Board Chair of CATSS Sue Angell, OC ’99, wrote in an email to the Review. “We started as a [trap-neuter-return] group. Students got involved, but when they graduated, residents and community members took over to make CATSS what it is today!”

The owner of Ginko Gallery & Studio, Liz Burgess, OC ’73, became a founding member and original board chair of the project, spearheading CATSS work since.

“When Liz Burgess became involved, CATSS found a person who was able to save fragile neonates and care for compromised kittens, turning them into social, loving cats that found forever, loving homes with Obies far and wide,” Angell wrote.

For many Oberlin students and even prospies, the back room of Ginko Gallery & Studio is a prime destination. Burgess first started using the back room as a place to care for stray kittens, eventually opening it up to visitors and fostering mutually beneficial cuddling arrangements for both visitors and cats.

Beyond just capitalizing on some good old-fashioned times with kittens, students and professors have been known to step in to address feline needs by bringing strays indoors during freezing weather, or fostering grown-up cats who are normally housed at CATSS’ Lincoln Street location to give them a break from shelter life. Professor of Russian Tom Newlin has a particular strategy and skill for beckoning cats over.

“I’m afraid that the flattering rumor [Professor of Politics Eve] Sandberg has been spreading about me being a ‘cat whisperer’ is a bit of an exaggeration,” Newlin wrote in an email to the Review. “It’s true that I like cats and they generally like me. But I think the real trick is that I mostly talk [to] them in Russian, which is a much more sinuous and feline language than English, so they respond better to it.”

Sandberg has often fed stray and feral cats in the past, and has reached out to CATSS representatives to help sick or injured campus felines. While she identifies as a dog person, Sandberg now has three cats of her own.

College students are often dissuaded from animal adoption with good reason, since making this lifetime commitment while in college is a serious undertaking. As Newlin says, “Friends don’t let friends ditch their cats.” However, fostering can be a great way for students who live in pet-friendly housing to help local animals.

College fourth-year Jacey Davidson, who volunteered at Ginko’s as a first-year student, was able to foster a cat this year, Warren, with her housemates. While foster parents need to pay for food and water, CATSS can provide funding for any medical issues. Davidson explained that the foster process was easy for them. After submitting an online form, she was invited to the Lincoln Street shelter that same day to meet some of the animals in what she described as a “speed dating” session.

“Warren was so sweet,” Davidson said. “We also wanted to make sure that we were getting someone who wasn’t on the hot list for adoption.”

CATSS is the backbone of adoption organizing in the town, and through its donor support, the volunteers are able to make sure that all cats are vaccinated, FELV/FIV tested, and spayed or neutered.

“There are two shifts of volunteers each day, one in the morning and one at night, and we organize the schedule one month out,” Angell and Burgess wrote in an email to the Review. “We also use email and text to communicate about [the] emergency situations that come up when you are dealing with living creatures.”

“If you think a feral cat is sick or injured, call us and we will help the cat!” Angell and Burgess wrote. “Our mission is to help Oberlin’s cats, and to maintain their health.”

They also advise people that if they notice a cat with a tipped ear, it means that the cat is feral and shouldn’t be approached. Even if a cat is approaching you, you shouldn’t necessarily feed it — this can confuse cats and make them less likely to return to their home if they do have one. CATSS encourages students to reach out if they are ever concerned about an outdoor feline. Those looking to get involved with the organization are encouraged to volunteer at Ginko’s, help foster, or reach out to CATSS for more information.