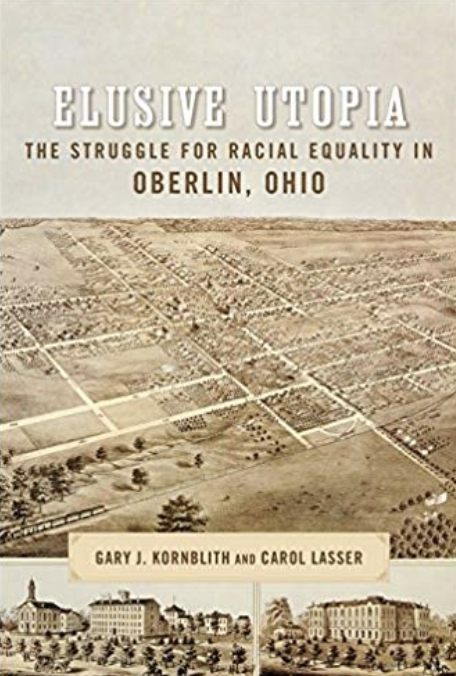 In the third grade I, like every other elementary-school student in Oberlin’s public schools, received a copy of an Oberlin history textbook. The book portrayed Oberlin as a utopian community that had transcended issues of gender and race from its inception. Yet my lived experiences and the stories I heard growing up as an Oberlin resident often contradicted this idealistic narrative.

I was introduced to the monograph Elusive Utopia: The Struggle for Racial Equality in Oberlin, Ohio last semester in an oral history course with Executive Director of Integrative & Experiential Learning and Assistant Professor of History Tania Boster. In this course, students worked on a collaborative, community-based research project about the life and influence of Betty Glenn Thomas, the first Black teacher in the Oberlin public schools and an alumna of Oberlin College.

In the first few weeks of the class we read Elusive Utopia to establish a foundational understanding of Oberlin’s history, and we had the opportunity to talk with the authors, Professors Emeriti Gary Kornblith and Carol Lasser, about their work and meticulous research process. Elusive Utopia has transformed my understanding of Oberlin history with its detailed and nuanced account. The book uses archival documents — including newspaper articles, census data, city records, and biographical case studies — to explore the often contested history of race in Oberlin from the town’s inception in 1833 through the mid-1920s.

Through this book, I gained historical insight into several underlying issues in my community and acquired a valuable tool that has helped me to speak more knowledgeably about issues of race and poverty in Oberlin that still persist today. I highly recommend that any student, resident, or person interested in a more accurate history of Oberlin read Elusive Utopia so that they can be more fully informed of this town’s complex — and at times troubling — past. I can only hope that Professors Lasser and Kornblith continue their research, and one day publish a second volume on how the issues they discuss have evolved, for better or for worse, over the last century.

The Oberlin College Archives staff enjoyed working with Professors Emeriti Carol Lasser and Gary Kornblith on their book project Elusive Utopia: The Struggle for Racial Equality in Oberlin, Ohio. The authors cited a number of materials in the book that are held by the College’s archives. In assisting with their research, our staff gained a better appreciation for the various collections that we hold. Additionally, Elusive Utopia is a great resource to use in our instructional sessions for visiting classes. Students learn about important issues in Oberlin’s history, and we explain how primary sources are made available to historians for teaching, research, and writing. We are grateful that we had the opportunity to assist the authors in this outstanding book project.

I’ve kept my copy of Elusive Utopia: The Struggle for Racial Equality in Oberlin, Ohio either in my backpack or on my bedside table since I first read it on a plane ride home at the end of the fall 2018 semester. The book inspired a private reading I undertook this past spring, resulting in a series of opinion columns about Oberlin’s history I published earlier this fall, and countless conversations with community members about our complex history.

Elusive Utopia was written because of Oberlin’s complex, problematic, often-misrepresented history — not in spite of these things, which is one of the aspects of the book that I find compelling. One passage in particular, from the third chapter, exemplifies Professors Emeriti Carol Lasser and Gary Kornblith’s nuanced approach to writing about Oberlin’s complicated history.

In 1851, two white female students and another young white woman from the town had an altercation with two female students of color. It’s not clear exactly what happened, but the tense interaction escalated and one of the white students fell off the sidewalk, built above the muddy streets to protect residents from debris and muck. All students involved were instructed by College administrators to write letters of apology — an attempt to deal out “an even-handed punishment for all involved.”

The two students of color were displeased with the decision and declined to write letters of apology.

“[Their] resistance suggests that students of color embraced different conceptions of fairness and justice than those applied ‘impartially’ by the white authorities who governed the college,” Lasser and Kornblith wrote of the incident.

While this event is not one that shaped Oberlin’s long-term trajectory, it is a historical example that dispels mythologies that paint early Oberlin as an ultra-progressive, racially-inclusive community. Sometimes, I think there is a collective tendency on campus to characterize the history of social justice on campus as very linear. Anecdotes like this one, and others scattered throughout Elusive Utopia, show that this trajectory has been anything but simple.

Every time I pick up Elusive Utopia, I draw new meaning from the depth of its research and the richness of its analysis. With my time at Oberlin coming to a close, I wish I’d been able to pick it up earlier — and I encourage every community member, especially those just arriving on campus as first-years, to do so.