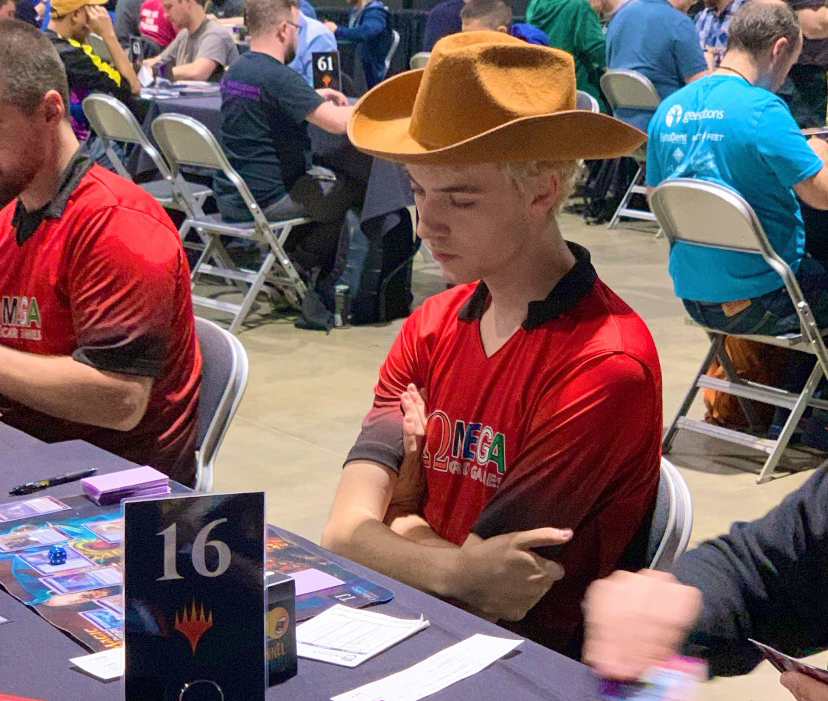 College fourth-year Charlie Rinehart-Jones in the middle of a Magic: The Gathering Pro Tour Competition. Photo Courtesy of Charlie Reinhart-Jones

One of Oberlin College’s most successful sports teams does not practice at the gymnasium. They do not need sneakers, cleats, or any special attire to compete. Their sport does not require physical contact with anything inanimate or living, except with a deck of cards or a computer.

Oberlin’s unofficial Magic: The Gathering team was recently ranked the fourth-best collegiate Magic team out of over 70 colleges or universities competing in the Collegiate StarLeague’s first ever Magic tournament. Oberlin’s team is currently first in its conference, though its ranking is subject to change after each Saturday’s match-up until the tournament’s end in March.

Magic is a collectible card game first launched in 1993. The two-or-more- player game is a battle between wizards, who cast spells and summon creatures — among other things — represented by over 18,000 unique playing cards, and attempt to deplete their opponent’s life points. Over twenty million people play the game worldwide, with a smaller percentage taking part in professional competitions. The game can also be played online, the medium Oberlin’s team uses for the Collegiate StarLeague tournament.

“Collegiate StarLeague is nice because I love college sports and sports [in general],” Rinehart-Jones said. “I did sports in high school, but I wasn’t any good. Now I’m good at something, [Magic], and I can do it in a way that is like [collegiate] athletics.”

Magic can be played in different formats with varying parameters around the basic gameplay. The Collegiate StarLeague requires competitors to face off using the Standard format, where players must design their decks with specific sets of cards released within the past two years.

“[Standard] was pretty bad the first couple weeks of the event,” said Antonelli, who is not a frequent Standard format player. “It’s no longer a problem as much, now.”

Rinehart-Jones is a certified professional Magic player, and has been competing in official, in-person Pro Tour tournaments since the 2013 Grand Prix in Washington, D.C. Many of these tournaments are high-stakes — they often require an entry fee of over $500 and award a total of $240,000 in prize money, with $50,000 going to the first-place winner.

So far, Oberlin has a 5–1 record. Rinehart-Jones feels that first place is within the team’s reach.

“I thought we were going to be [ranked] first because we have the most wins of any team right now,” he said. “We haven’t lost a game after our first match, so we are 14–2 in games. It’s kind of like a point-differential.”

The accessibility of the collegiate tournament is seldom seen on the Pro Tour and other tournaments, which normally have expensive entry and travel fees on top of payments to add to their 60-plus card deck, which can cost anywhere from one dollar to several hundred dollars. The most expensive Magic card in existence is “Black Lotus,” which has been sold for $166,000.

“It’s definitely a luxury hobby,” said Rinehart-Jones. “When I was a kid and not a competitive player, the cost wasn’t so high because [I didn’t] care about winning. But when you’re competitive, it’s not only that the cards are expensive, but they are constantly becoming obsolete. You have new cards coming out four or five times a year, and the old cards [aren’t legal and] don’t count anymore, so you have to get the new cards. I’m lucky because I have close friends that loan me cards.”

“The physical decks are very expensive,” said Antonelli. “My Modern [format] deck is probably $1,000 right now. I’ve had it for a while and have been collecting the cards for it for a [long time], but the cost cap is high for certain ways of playing this game. But [online] I basically have not spent any money, and [this] could be a [more accessible] option for others.”

However, Karamchandani feels differently. He argued that Magic is often misunderstood as being economically out of reach, and said the Collegiate StarLeague Tournament shows that this is not necessarily the case.

“I feel like Magic has a lot of misconceptions,” said Karamchandani. “The [Collegiate StarLeague] tournament has no economic accessibility concerns because, unlike other Magic tournaments, there is no entry fee and you don’t have to pay money for cards. I feel like there is a strong conception that Magic is a ‘play-to-win-play-to-compete’ type game, but I have never spent more money on Magic than I have made from Magic.”

With the rising popularity in non- traditional sports like eSports and Magic, colleges and universities will likely see a stronger push for organizing such teams, if they haven’t already. Oberlin has several active groups on campus with such focuses, such as the Oberlin eSports Club — which hosts Super Smash Bros. video game tournaments, among others.

“I think that there’s a lot of people who really like [eSports] and table-top and board games, but don’t really know how to get into it or increase their skill level,” Antonelli said. “There are a lot of people who don’t think of it as part of their identity but really enjoy playing [different] games. I think that could definitely become a bigger part of the campus’ identity.”

The three members will face off against OSU this Saturday. While many games are live-streamed with commentary on the Collegiate StarLeague website, this one will not be. However, many future games will, and those who are curious can watch their fellow Oberlin Magic players putting Oberlin on the eSports map.