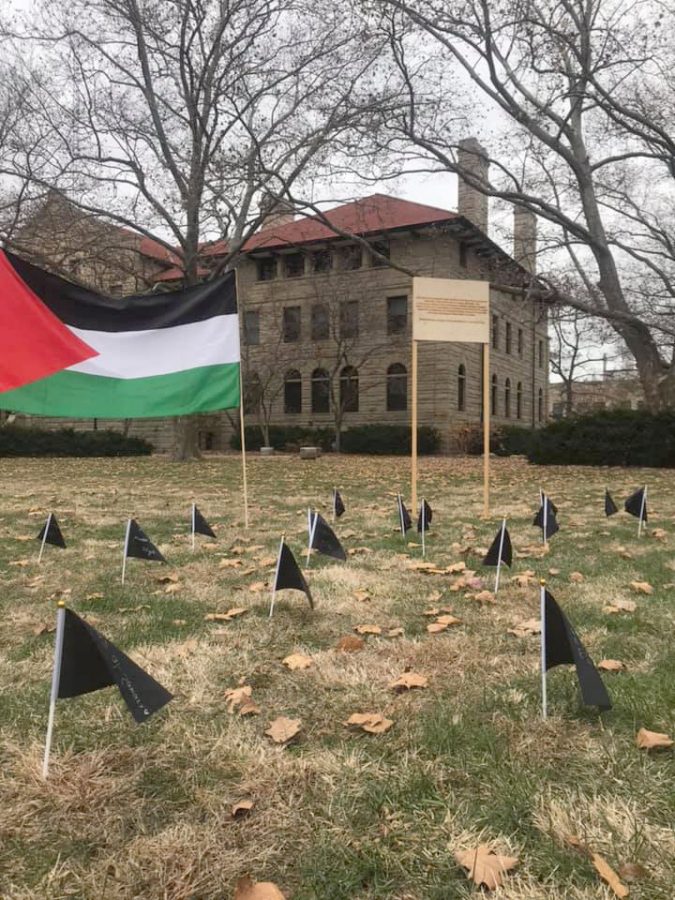 A memorial to Palestinians killed in a November attack by the Israel Defense Force was installed before Thanksgiving by student organizations Jewish Voices for Peace and Students for a Free Palestine.

Before Thanksgiving break, Oberlin students from Jewish Voice for Peace and Students for a Free Palestine erected a memorial for Palestinians killed in a Nov. 12 airstrike by the Israel Defense Force.

The memorial commemorated the lives of 34 people — including eight children — killed in a round of combat that lasted two days. Palestinian officials reported that over 80 people were wounded during this time.

The combat began when Israel launched an airstrike in an attempt to assassinate Bahaa Abu el-Atta, considered a terrorist leader by the Israeli government. Abu el-Atta was a commander in the Palestinian Islamic Jihad, a Damascus-based organization formed in 1981. Israel credits Abu el-Atta with planning multiple terror attacks against Israel.

The initial airstrike was launched at Abu el-Atta’s home, killing him and his wife and injuring his children. After the attack, militants in Gaza fired back on Israel.

Nickolay Mladenov, the United Nations Special Coordinator for the Middle East peace, commented that the UN was working to de-escalate the situation.

“The indiscriminate launching of rockets and mortars against population centers is absolutely unacceptable and must stop immediately,” Mladenov said in a statement.

The idea for the Oberlin memorial originated in a JVP meeting as a way to express solidarity with the Palestinian people. Soon after the strikes, JVP and SFP worked together to obtain permits to place the memorial on Wilder Bowl. The memorial was taken down upon the expiration of the permits.

The memorial’s inclusion of Abu el-Atta and other members of PIJ prompted a backlash from local and national commentators, including many Oberlin alumni, and was covered by local and national media outlets. The Chronicle-Telegram covered the memorial, as did major news outlets including Fox News and Daily Mail. The latter articles accused Oberlin students of honoring terrorists.

The College released a public statement about the memorial in response to the media attention.

“Oberlin College is aware that an installation on campus last week by two student groups offended some members of our large and diverse community,” the College wrote in their statement. “Oberlin students, like all citizens, are entitled to their own thoughts and expressions and are individually accountable for how they engage in public discourse. Students do not speak for the college, and the college does not dictate the views of its 2,850 students. … Oberlin opposes all forms of anti-Semitism, as we do all forms of prejudice and oppression.”

Student organizers from SFP and JVP declined to comment for this story.