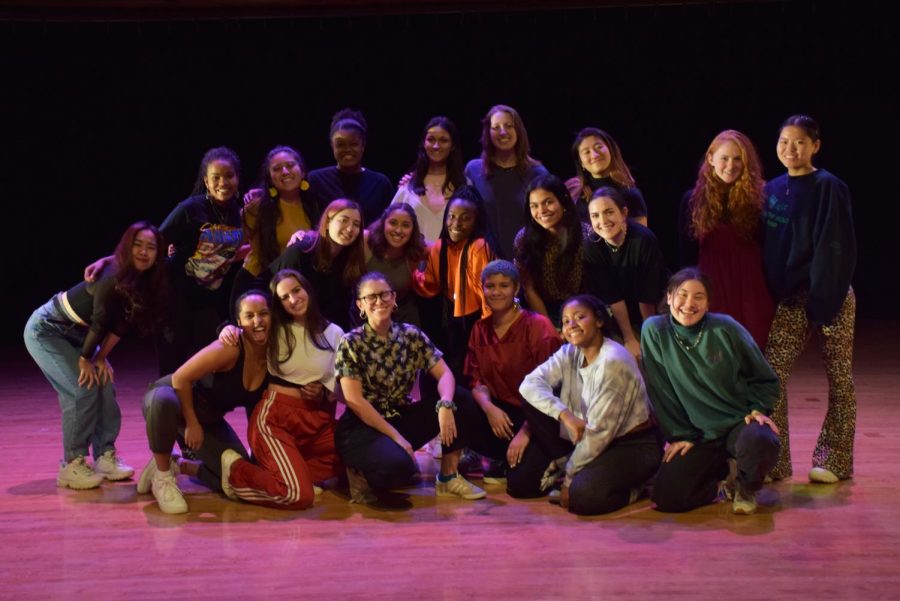 The members of AndWhat!? pose for a pre-show portrait.

It is impossible to sit in on an AndWhat!? rehearsal and not be blown away by the power and energy they build. In their drive to rehearse each piece again and again until it is just right, and their ability to channel complicated and raw emotions into moving pieces, the group’s hard work, energy, and talent are palpable. AndWhat!? is a powerhouse hip-hop group that slays each performance, and creates an important space at Oberlin.

“AndWhat!? was founded [in 1999] on the idea of Black female activism,” said College second-year and co-chair Deijhah Scurry. “We are a Black dance group on campus that highlights hip-hop’s female and femme-identifying people.”

Ruby Marzovilla, College fourth-year and co-chair of AndWhat!?, has been a member of the group since her second year. She explained that prioritizing Black femme voices is extremely important at a predominantly white institution.

“[We prioritize Black femmes] to counteract the many dance spaces where that isn’t the case,” Marzovilla said. “It’s honestly been a problem in the dance department at Oberlin that Black and POC bodies are not represented to the same level as white people here. So, AndWhat!? is definitely a safe space for that to be prioritized.”

Over the years, however, the group has expanded and now includes non-Black people of color and white people in its ensemble.

“A large reason why the group expanded was because there just wasn’t enough interest to have a big group for this type of ensemble,” Marzovilla said. “So even though we now include both non-Black POC and white women within our space, I think as long as we’re knowledgeable about what this space is for and every member is consistently thinking about that — that in my mind is powerful.”

AndWhat!?’s commitment to maintaining the values of its founders is evident in its rehearsals and the conversations that take place during practice sessions.

“We always put Black and brown bodies towards the front of our pieces because hip-hop is a Black art form, and so those are the people that should be celebrated the most,” Marzovilla said. “Even in our music choice, we’re always prioritizing Black female artists. No matter what the theme is, that’s always a focus.”

AndWhat!? puts together two main performances a year — the Fall show and the Spring show. This semester’s Fall Showcase is called “Vulnerability is Power: How We Heal from and Celebrate our Insecurities.”

“Our main focus was to have the choreographers be inspired by something that they’ve either experienced prejudice because of, or been marked as not matching the stereotype of someone’s perception of that,” Marzovilla explained.

AndWhat!? has always used its Fall Shows to explore more serious and emotional themes, while their Spring show is more light-hearted. For example, their last Fall show, “Pissed Off Kinda Attitude,” focused heavily on Black anger. However, this semester’s show stands out from previous performances.

“I’d say what’s really distinctive about this show is that the emotions we’ve tapped into in the past are anger and letting go of very intense feelings, but this is definitely showing a softer emotional side which I think is very special,” said Marzovilla. “We focus on both acknowledging the things that make us, which may have caused a variety of feelings in the past, and how we’ve grown from them and are now starting to embrace them and celebrate them.”

“Everything just goes back to being a Black woman,” Fair said. “We’re expected to be strong all the time and not really show our emotions, because if we show our emotions we’re not taken seriously or we’re considered angry or irrational. There are forces in the world and in our everyday lives that are put in place to harm us and we don’t often get a chance to fight against that but also celebrate being vulnerable as something beautiful that make us stronger because it makes us more open to growing. For this show, we got to choreograph whole pieces together, just the Black girls and that was really beautiful.”

Scurry encourages audience members to come to the show with an open mind.

In addition to respecting the dancers, non-black audience members should also be mindful of the space they are occupying and their positionality in relationship to the show.

“White members [of AndWhat!?] are working as allies in the space … and it should be the same with the audience,” said Marzovilla.

Fair spoke about the importance of call and response in a Black arts tradition.

“Give the dancers energy when they’re giving you energy,” Fair said. “But also be aware of the space that you’re [occupying]… This is a space that was created for black women to be activists and dancers at the same time and while it’s transformed into something different we still hold that in our values. If you come to the show, take the time to listen and reflect on the ways in which you interact with Black art.”

“Vulnerability is Power: How We Heal from and Celebrate our Insecurities,” will take place today and Saturday at 8:00 p.m. in Warner Main.