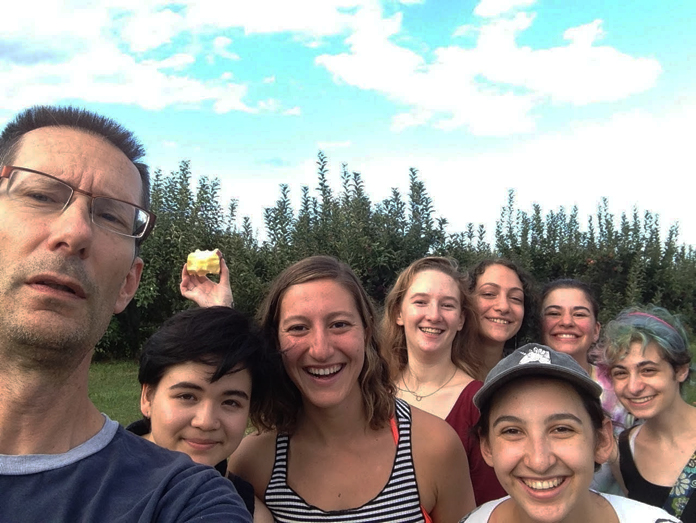 Nathan A. Greenberg Professor of Classics and Acting Chair of Comparative Literature Kirk Ormand and former students in his “Odysseys and Identities” first-year seminar class on an apple-picking trip.

While the First-Year Seminar Program, a primer for liberal arts writing composed of small classes, is described as “a singular opportunity for learning,” few students are still sincerely attached to their first-year seminar experience by the end of their college career. Not so for alumni of Nathan A. Greenberg Professor of Classics and Acting Chair of Comparative Literature Kirk Ormand’s first year seminar, “Odysseys and Identities.” The ‘Odysseans,’ as they’re dubbed, have had semesterly reunions since leaving the class, which runs every four years as the Classics department rotates through its first semester offerings. This past Friday, Ormand brought the first-year and fourth-year classes together for a pizza lunch, where they got the chance to ask questions of one another and share wisdom from opposite ends of their Oberlin careers.

Ormand’s class is thematically apt for a first year seminar — the course centers on Homer’s Odyssey and a variety of more contemporary books and films that utilize similar structure or themes.

“The class is organized around the Odyssey, which is, at its root, the story of a man coming home after 20 years, and having to figure out who he is, who others think he is, and how to be that person,” Ormand wrote in an email to the Review.

Discussions of identity, self-discovery, and change abound. What’s more, the class encourages students to examine what’s unique about a particular work of art.

Beyond the academics, though, it’s clear that there’s something special about Ormand’s approach to the first year seminar that is hard to describe. College fourth-year Rami Teeter, who came to Oberlin as a prospective Creative Writing major and will graduate with a degree in History, called the Classics seminar “probably the best class I’ve taken at Oberlin.”

College fourth-year Adrienne Rozells still cites being deeply touched by an email Ormand sent after fall break during her first year, welcoming his students back “home” to Oberlin. Ormand didn’t even remember writing the message, but it inspired Rozells to write about it for the Office of Admissions, and after reading her piece he sent the same remark to his class this fall. Ormand’s thoughtfulness toward his students is evident.

“Long after his duties as a first semester advisor should have ended, he has continued to tolerate our inside jokes and has helped every ‘Odyssean’ thrive at Oberlin and learn not just the foundation of the liberal arts, but important lessons about who we are and what direction we’re headed,” College fourth-year Johan Cavert wrote in an email to the Review.

Since Cavert’s time in Ormand’s seminar, Ormand has reached out to students each semester to plan gatherings. He’s hosted the cohort at his home for brunch, treated students to meals at Oberlin Kitchen, and taken them apple-picking, among other excursions. Modestly, he maintains that it was the cohesion of this group of people that fostered such an inviting community.

“You’re giving me too much credit for actual forethought,” he said. “It just [seemed] like a natural thing to do. This was a nice group of students that obviously liked each other.”

Many classes at Oberlin have friendly relationships, but few can maintain years of cohesion — the difference is in the details, and the fourth-years agree that Ormand’s simple email missives worked wonders. It’s a role akin to that friend who keeps sending memes to the group chat; Ormand is the nucleus of the class, while also being sure to take a back seat.

“I haven’t known anyone else who still talks with their first-year seminar, or if they even remember who was in their seminar,” College fourth-year Arielle Hernandez Lyons wrote in an email to the Review. “I remember that at the end of the semester, we all got together and made Kirk a big thank you card with [a] drawing and everything, and then we gave it to him and someone made a cake, during finals week. I think we just kind of liked each other, and having Kirk to organize things made it super easy to keep in touch.”

Ormand has facilitated similar reunions for his past classes — although this fourth-year group was particularly interested in maintaining their bond after class was over. Last week’s pizza lunch, though, was new territory.

“I was kind of nervous about it because I didn’t know what would happen,” Ormand explained. “I didn’t really have a plan. I told the elder Odysseans to come with advice, and I told the younger Odysseans to come with questions. [And actually], they perfectly naturally all just sat around and talked for an hour and a half, and nobody seemed to want to leave at the end of it.”

For the first-years and fourth-years alike, the meeting provided an interesting opportunity to talk about their different experiences within the culture of Oberlin, and their different feelings about the future.

“He got up and actually left the room for 15 minutes in case we wanted to talk about him, which is very trusting,” said College first-year Gillian Ferguson of the group’s pizza lunch last week.

This level of trust makes students comfortable in Ormand’s classroom, and binds them together after the semester’s end. This devotion to a welcoming space also seems to have had a trickle-down effect — elder Odyssean, Review Production Manager, and College fourth-year Devyn Malouf is now the Peer Advising Leader for the seminar’s first years, and tried to model her role on the care and support Ormand provided in her class.

Others have also been inspired by Ormand’s guidance and dedication to his students.

“Watching Kirk teach helped me become a better PAL and tour guide,” Rozells, a PAL for a different seminar, said. “He clearly knows what he’s talking about — he’s an amazing professor. He’s so smart and holds a lot of authority … but he has never wielded that as a power over anyone. It’s a true exchange of ideas [and] just shows a level of confidence to be able to be like, ‘yes, I can control this space, but I can also be a human being who does exist as a friend in your life.’”

Ormand finds that the seminar’s content lends itself particularly well to students not only forming connections with one another, but engaging in valuable self-discovery during a key transitional moment. Each semester that the current fourth-years have met since their time in the class, he asks them what they wish they’d known as first-years.

“It works well for a first-year seminar, in part, because the students in the class are constantly going through something similar,” Ormand wrote. “[They are] moving into new social contexts, and figuring out how to be themselves in those changing contexts, and then returning home — wherever home is — and having to figure out who they are all over again.”