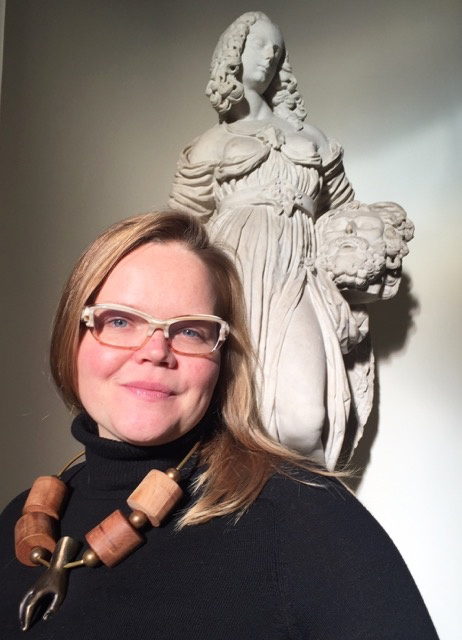 Hannah Wirta Kinney is the assistant curator of academic programs at the Allen Memorial Art Museum. One of the new curators this semester, Kinney started her position at the AMAM in September. Prior to working at Oberlin, she taught college classes on Renaissance and Baroque art, and has worked at the Metropolitan Museum of Art and the Brooklyn Museum. She talked with The Review about her time at Oberlin thus far, and her thoughts about art and identity.

Why did you decide to apply to work at the Allen?

I was drawn to Oberlin and the Allen Memorial Art Museum in particular because my education was always in liberal arts colleges, and I think that liberal arts learning is really important … [Oberlin] is a liberal arts college with great students, and a museum with a collection of Renaissance and Baroque art, which is my specialty.

It was just so many things coming together that seemed like a great fit. My role is working between the museum and faculty members who want to bring their students into the museum. I was always told going through my education that [I was] never going to be able to do both museums and academic teaching, that [I was going to] have to choose one. And this lets me do both, which is exactly what I wanted to do.

Can you talk more about why colleagues said you can’t do both museum work and academic teaching?

There was actually a famous book [of essays] about [this topic] called The Two Art Histories … And the argument goes that we’re all studying objects and art and thinking about what they mean and where they overlap that are two distinctly different approaches to art history between the museum and the university, which would mean that all art historians have to make a choice: whether they’re going to be a museum person or an academic person. For me, that was a choice I didn’t want to have to make.

Because I like teaching, doing research, and the kinds of questions that academic work in a book format allows you to think about, but I also like these conversations around objects, thinking about audience and making visual arguments. I would say that even in a museum, there’s kind of a divide, too, in the jobs that people have. [There are] curatorial positions, people who work more with collections — and then there’s the education department. In my role [at Oberlin], I get to do both of those things within the museum as well.

What kind of work have you done in the past?

My research is on sculpture in … 17th-century Florence. I am especially interested in questions related to replication and originality in the early modern period … My first job out of college, really by chance, was at the Metropolitan Museum of Art in New York, where I worked with academic programs. I really just loved working in a museum: walking past things every day that you get to look at, and the kinds of conversations that you can have around works of art that are different than in the classroom, so not necessarily reading a text and saying, “What is this about?” but thinking how works of art can make us reflect on lots of things that we might be thinking about in our personal lives, class, and society.

I worked in the education department at the Met, and then I most recently was at the Brooklyn Museum in New York working with visitors who were blind or had low vision, becoming their eyes at the museum and describing works of art to them. That was an incredibly meaningful experience for me because it really made me think about what it means to see, what it means to look at something, and that it isn’t just visual, it happens on so many different levels and associations.

In what other ways is your position at Oberlin similar to your past job experiences?

In my job at the Met, I worked with academic programs. What we thought of as academic programs most often was professional development within a museum setting, so I worked a lot with high school, undergraduate, and graduate student interns, and fellows — people who are working on their Ph.D. or who have their Ph.D. and are working on a book project.

At the Brooklyn Museum, there is a really great exhibition program with contemporary art, and a lot about the diversity of Brooklyn; they do a lot of interesting programming about where the museum sits with the community, so that has to do with all sorts of different identities: racial, socioeconomic, gender, sexuality. … Those are things that I’m interested in at Oberlin too, because it seems like something that the students are thinking about as well.

Along the way I’ve also taught college courses, and so one thing that I miss that I’m trying to find is finding ways to talk to students about what they’re working on, and hearing what they think about stuff. Teaching undergraduate students, you can see this moment when something gets really exciting, and when their whole idea about something has changed, and that’s the fun part of teaching: when you’ve blown somebody’s mind, and they’re never going to look at something the same way again. I’ve only been here since September, so I want to keep thinking of ways that I can hang out with students and talk to students about what they’re thinking about.

What are your impressions of Oberlin?

The students are smart here, and that makes it fun … I’ve also realized that I like being in a college town, which is weird because I was living in Brooklyn … I’ve realized that living in a college town and having the college at the center of this town has this particular energy. It’s like optimism and pessimism at the same time, but the optimism is energizing in thinking that these people who are going to make big decisions in the future and change the way we do things, are here just scurrying around trying to get their papers done or get to class or have fun.

Are there any other hopes you have for your work in the future?

One priority is putting the student voice more out there, and I don’t know yet how it’s gonna happen, but it’s something that I want to do. Also, bringing people in a more casual way; not just with classes, but how to create programs or opportunities for conversation or have the museum be a part of your free time as well as your academic time. That’s something I’m interested in knowing: Do people come here when they don’t have to come here for an assignment?

I worked in these big metropolitan museums where we thought about the barriers to entry, and what it means to walk into a Neoclassical temple or a Renaissance temple and [they’ll say], “Do you think is this a space for me?” And the answer is yes, it is a space for you, but people have those hesitations [if] they’ve never been in a museum before or [they] don’t know how to act in a museum.

Another thing I’ve been thinking about, too, is that I started my job at the Met when I was straight out of college, and I was the youngest one around. They were having all these discussions about how to bring young people into the museum. It was always this idea that you need to have alcohol, and all that young people want is a party. All right, young people like a party, everybody likes a party, but they were like, “They won’t just come,” and I was saying they had a lot of preconceived ideas about how young people spend their time.

I don’t think it’s about parties, but just being comfortable to think and meditate here, walk around and have a chance to think through an argument with someone, be inspired, be happy, whatever. All of those things are valid things to do in a museum, but giving people the space to do all those things is an interesting challenge that museums are always thinking about … We always have to keep thinking who is our audience? What do they want? What do they need? Within the whole array of things Oberlin is giving you to do, where does the Allen fit in to give you something you need that you don’t have here already?