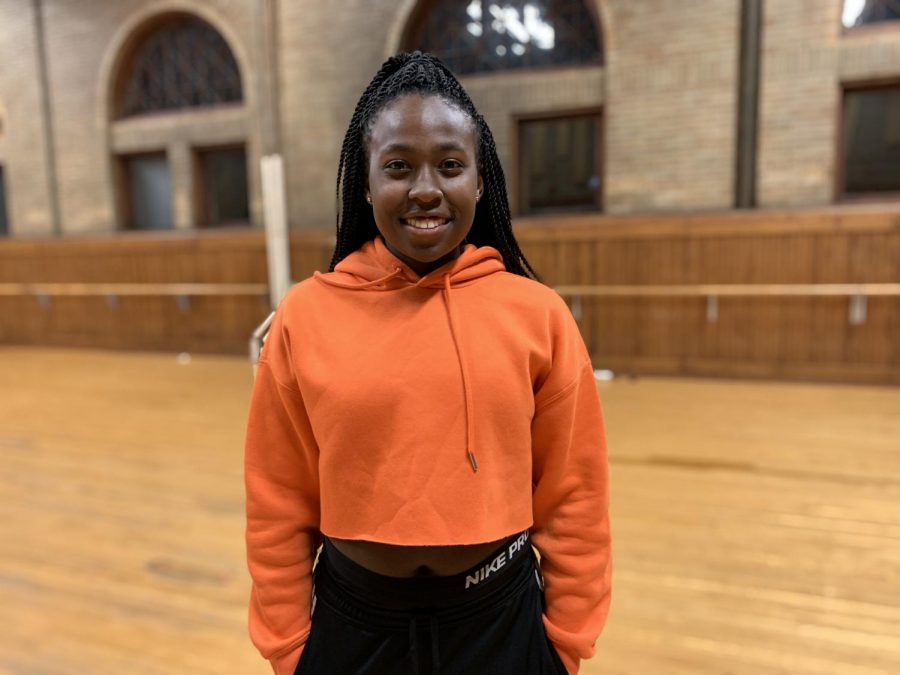 Hailing from New Jersey, College first-year Chilly Wallace has already made a massive impact on Oberlin’s athletics record books. At the very first meet of her college career, the varsity hurdler broke the school’s record for the 60-meter hurdles by 0.1 seconds, crossing the finish line with 9.60 seconds on the clock. In addition to track, Wallace has also been exploring all that Oberlin’s campus has to offer: she is currently on the pre-med track and looking to major in a science-related discipline; performs with Oberlin’s dance team AndWhat!?; and lives in Afrikan Heritage House, a Program House reserved for students with identities or interests that pertain to the Black community.

How do you feel about breaking the 60-meter hurdles school record at your very first meet?

It was kind of wild. I still can’t believe it happened, but it did. I just ran the race, and one of our captains, [College third-year] Victor [Salcido], asked, “What was your time?” I said, “Oh, I think it was like 9.6.” And he said, “Oh, I’m pretty sure you broke the school record. I’m going to go check, but I think you broke it.” So he walked over to my coach, and my coach goes, “Well, the record was 9.7 seconds.” I was so surprised and said, “Shut up. I did not just break the record at my first meet. That’s kind of insane.” So I was just in shock and still am. It feels nice.

Was breaking the school record your goal for this meet?

It just kind of happened. And the thing that’s even crazier is that in high school I didn’t run 60-meter hurdles; I ran 55-meter hurdles, and the time that I ran for Oberlin was equivalent to how I had ended my high school season. I didn’t really change. I’m still as fast as I was when I was my fastest in high school. High school is why I was able to already have the speed I needed to compete for my first meet. I think that’s how I was so prepared.

I really like my track team. They’re really funny. They make practice fun. Typically in high school, the hurdlers only knew each other, and the sprinters only knew each other, and so on. But here, it’s a group of jumpers, hurdlers, and sprinters who all know each other. I know a few distance people, and I’ve never had that type of relationship before. So the Oberlin track team is really like a family. They always say that we’re a family, and it’s not just something that they say. It’s actually happening, which is really cool and something I haven’t experienced on a track team before. So I really like that I have this opportunity to be close with so many people that are also my teammates. I think that us being close certainly does help with the women’s team’s success. There’s just something about being at the line or about to jump and hearing your teammates cheer you on. It motivates you to jump farther and run faster or get over the bar.

Has it been difficult balancing your academics with your athletics?

It’s surprisingly easier in college than in high school. In high school, I was a cheerleader and on the track team, so I would go from school to track at 3 p.m. to cheer at 5:30 p.m. until 8 or 9 p.m., and then I’d have to do my homework. Here it’s much easier, especially since there’s time in between classes and time between school and track for me to nap or do homework. Having my classmates around 24/7, so I can just ask for help on something, is definitely a useful resource that I didn’t have in high school.

In addition to track, you are also a member of Oberlin’s dance group And What!? — what is that like?

Surprisingly, I’ve never been part of a dance group before. I was always a cheerleader since I was five years old, and I heard about And What!? from my RA, [College second-year] Iesha [Phillips], because she’s on AndWhat!? She said, “I want you guys to try out,” especially to all of us Black girls in A-House.

How did you come across the dance group?

Iesha wanted all of us to try out for the Black hip-hop group. So that’s basically how I found out about AndWhat!? Then I made it. I do a lot of flips, which is really cool. And I’m pretty flexible, which I think is helpful. I know how to dance on my own, not professionally or anything, but it’s easy for me to pick up things. That’s why I think And What!? was a good fit, because some of the skills I learned in cheer are applicable.

What are you looking to major in?

I know I want to do something in the sciences. I am following the pre-med track, but I’m not really sure what I want to major in. I will say that this week has been really hectic considering I’ve had some exams and track, and then I have And What!? rehearsals all week and then final papers due. So it’s a lot. But now that the week is coming to an end, everything’s coming into place. It’s going to be a lot of weight lifted off my shoulders.

Has living in Afrikan Heritage House influenced your introduction to Oberlin at all?

My top two schools were Oberlin and Howard [University], which is a HBCU [Historically Black College or University]. But I chose Oberlin because I knew I wanted to run track in college. Coming to Oberlin, I found out about A-House, and I realized I wanted to live there and be able to surround myself with other Black people. It’s really made such a big difference. I know there’s some Black kids who don’t live in A-House, and they say, “Wow, you guys are really close over there.” And we invite them too. It’s our own little community where I know I’m in a safe space and can be myself, which is really nice.