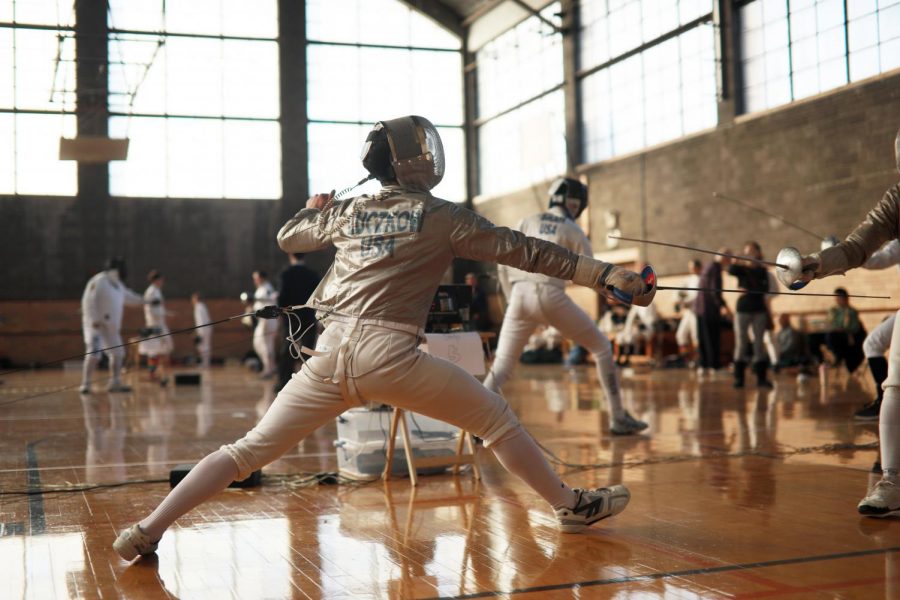 The Oberlin Fencing Club, also known as the Oberlin College Flaming Blades, is the oldest club sport at Oberlin. Since its founding in 1929, the club has attracted fencers of all skill levels to join its growing community. Several members grew up fencing, while others were introduced to the sport through the fencing ExCo. In addition to traveling around Ohio to compete, the team hosts United States Fencing Association tournaments in Hales Gym every semester.

College second-year and vice president of the fencing club Arman Luczkow began fencing when he was eight years old. He and his brother used to sword fight, creating weapons from sticks. Luczkow’s mother decided to sign him up for a fencing club out of concern that the two would accidentally injure each other, and he fell in love with the sport. At Oberlin, Luczkow organizes the fencing ExCo, FenceCo, with the club’s president, College second-year Silas Pelkey, and College third-year Michelle Liu.

Pelkey was drawn to the idea of teaching a fencing ExCo because of his previous experience teaching friends and family how to fence.

”I’ve been teaching fencing to random people and friends for a long time,” Pelkey said. “So it felt like the most natural step to go on and teach an ExCo about it. The fencing ExCo is a long-running tradition, and it’s actually how we get a lot of our members. About half the team, maybe even more, [is] former ExCo students. We try to create a pretty chill and relaxed environment to just have fun and explore.”

College third-year Valentina Zhang was one of these recruits. She described her introduction to fencing as a spontaneous first-year decision.

“It was very random,” she said. “I was walking on the street one day, and my friend was like, ‘Hey, I’m going to this fencing ExCo, do you want to go?’ And I was like, ‘Oh, fancy; I’ve never done that before, let’s go.’”

Zhang is also a fencing referee. She completed a two-day exam on fencing rules and attended a seven-hour seminar where she learned the ins and outs of the job. Doing the classes improved her fencing abilities and opened the opportunity for her to help referee the Oberlin tournament.

“Becoming a referee would help me know a lot more about the rules and then help me become a better fencer,” she said. “Also, sometimes at our home tournament, we don’t have enough referees, so I thought if I could get this done, then why not?”

To be on the team, members are required to either have previous fencing experience or to take part in the ExCo. Both Pelkey and Luczkow acknowledge the privilege of being able to fence growing up.

“Fencing is a very expensive sport,” Luczkow said. “Unless a club provides you gear, you can’t fence if you don’t have the money. Especially if you’re fencing on your own and you’re not at a club, you also have to pay for tournaments. And you’ll probably have to travel, which is also even more money. And if your gear breaks on-site, then you have to buy it immediately, or all your costs are wasted because then you can’t fence.”

The fencing ExCo serves as a way to bridge the gap between students that grow up fencing and students that are interested in learning but have not had the opportunity to do so. The fencing ExCo provides all the gear except for shoes and covers travel and registration costs for tournaments.

“One of the goals of the ExCo is to offer an introductory course so that everyone can experience the sport meaningfully without having to actually invest actual money into it,” Pelkey said. “It’s a lot easier now for new fencers to get involved with the sport because the threshold can be a real barrier.”

The fencing ExCo and team even have an armory in Hales Gymnasium, where they can repair weapons instead of having to purchase new ones each time one breaks.

“One of our officer positions is armorer, and we hold an armory space where we store all our gear and equipment,” Luczkow said. “The armorers repair all our gear and put weapons together. It’s a position that we train people for because it’s so important, and they work shifts every week to make sure that they’re repairing all the gear.”

While the team has made strides to make the fencing community more representative of the Oberlin College student body, they were surprised to find that fewer members that identify as female joined this year. This has been an obstacle in at competitions, where the team is separated into men’s and women’s squads in order to compete. Each weapon — saber, épée, and foil — requires a different set of skills when teams travel for tournaments; three players are needed for each specific weapon to form a squad that can compete. Currently, Zhang is the only female sabeerist, leaving her without a squad.

“I feel lonely because I can’t have a squad in tournaments,” Zhang said. “So basically I’m fencing other blades in the tournament, which is very sad. I wish there are more female fencers, but I’m also trying to do more épée and foil.”

Even though Zhang is disappointed to be the only saberist that is currently competing for the team, she noted that this year has the highest club attendance that she has seen since her time on the team.

Pelkey and Luczkow are aware of the gender skew of the current roster. Pelkey mentioned that it is particularly challenging to find people to fill the roster because members have to be highly specific.

“Even though we have over four females in épée, you can’t transfer them over to another weapon easily because the whole team is very specialized, which makes it hard to fill out,” he said. He also noted that while there are four females in épée on the roster, only two regularly attend.

However, both are hopeful that more female-identifying players that are interested in fencing will join through FenceCo.

“There are people who are interested, and we’re always trying to recruit everyone. The more people we can get, the better,” said Pelkey.