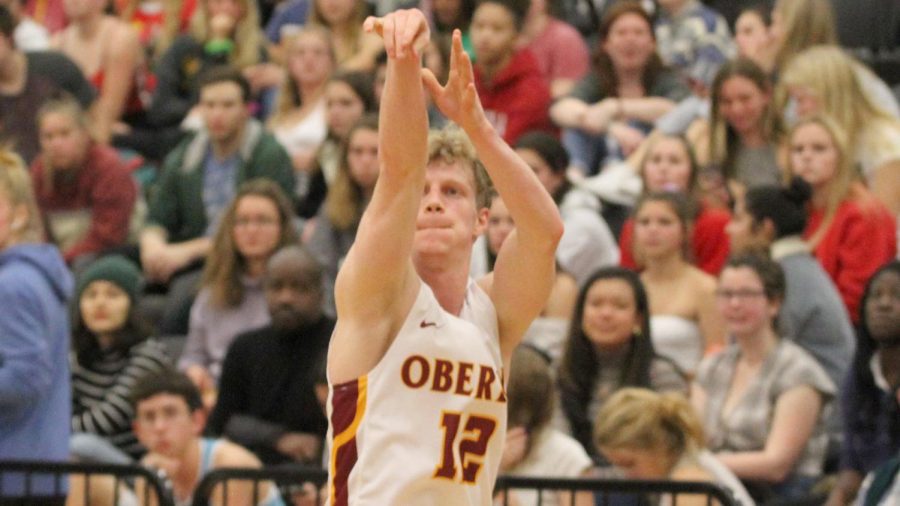 Reaching 1,000 career points is one of the most exclusive milestones a college basketball player can achieve. Over the course of Oberlin men’s basketball history, only 26 players have accomplished this impressive feat. Last year, Eli Silverman-Lloyd, OC ’19, became the 25th player to hit 1,000 career points. College fourth- year Dre Campbell is looking to be the 27th player to reach this mark. His teammate, College fourth-year Josh Friedkin, became the 26th member of this exclusive club last Tuesday night in the Yeomen’s thrilling 70–69 win over Defiance College.

“Just seeing that number with my name next to it is truly something special,” Friedkin said. “I think that more than anything, it confirms my belief that if you work hard enough at anything, you can accomplish more than you ever thought you could. A lot of guys are bigger and stronger than me, but few if any work as hard. And I think that’s the most rewarding part.”

Campbell sees the work ethic that Friedkin displays, and is equally impressed with his teammate’s meticulous preparation for games.

“Josh is a critical player that critiques every play,” said Campbell. “This helps when approaching competition and playing against new opponents because he is able to dissect [a] player’s weakness well. [Also] he has every type of foam roller and basketball accessory. The man stays ready with game-time essentials.”

Friedkin’s work ethic and preparation aren’t the only parts of his game that led him to this incredible milestone.

“Josh has a fearless approach to the game,” Silverman-Lloyd said. “It allows him to make great plays on both ends of the floor. It’s allowed him to hit multiple game-winners.”

While Silverman-Lloyd may see game-winners as part of Friedkin’s style, now, they are part of his legacy. With 25 seconds left and the Yeomen down by two, Friedkin knocked down a three-pointer, securing a 70–69 win for the Yeomen and pushing his career point total to 1,001 right before the holiday break.

“You grow up dreaming of hitting game-winning shots, and that is something I will never shy away from,” said Friedkin. “When the game is on the line, I want to be the one to decide the game.”

Hitting 1,000 career points means something different to everyone. The one constant is all the hard work that each player puts into their craft.

“It was a special moment,” said Silverman-Lloyd, whose 1,099 career points rank 20th overall at Oberlin.

Campbell’s career total currently sits at 969 points, but, with over half the season left and his 12.3 points-per-game average, he is almost guaranteed to eclipse the 1,000 point threshold before he graduates in May.

“I have no clue when it will happen,” said Campbell. “I just want to win and have fun on the journey to a championship. Whenever it happens, I will be grateful.”

While Friedkin, Silverman-Lloyd, and Campbell all have different playing styles, the three prolific scorers have a similar philosophy when it comes to playing basketball. In their eyes, individual accolades come second to team success.

“To be honest, the point total itself never really crossed my mind before this year,” Friedkin said. “As satisfying as individual statistics are, doing whatever it takes to help the team win is priority number one for me. I was mostly concerned with finding my place within the game of collegiate basketball. It turned out that the ability to score the ball ended up being a part of that place.”

Another consistent trait that all three players possess is their competitive drive.

“[Friedkin] has a fierce, competitive spirit and the will to get things done,” said Silverman-Lloyd. “We share [that] and a willingness to treat basketball as a lifestyle. It was only a matter of time [before he reached 1,000 career points].”

Sometimes that competitive spirit can spill over into their relationships with each other.

Becoming a 1,000 point scorer requires a lot of people pushing you to become your best. For many players, this list consists of family, friends, and coaches they’ve had along the way. For Campbell, his list includes Friedkin.

“I tend to be a person who wants everybody to push themselves and enjoy playing basketball,” said Campbell. “[Josh] and I help each other. He helps me with understanding play calls and I help by staying positive.

For Friedkin, this respect is mutual.

“Dre has exemplified the gold standard of consistency from day one,” Friedkin said. “He’s the kind of guy you want on your side. As long as we win games, I couldn’t care less who finishes with more points.”

“The team success we are enjoying right now has been phenomenal and is worth just as much to me as the individual accolades I have collected along the way,” said Friedkin. “I’m truly grateful to Oberlin for everything it has done for me and I intend on continuing to give my best effort each and every day.”