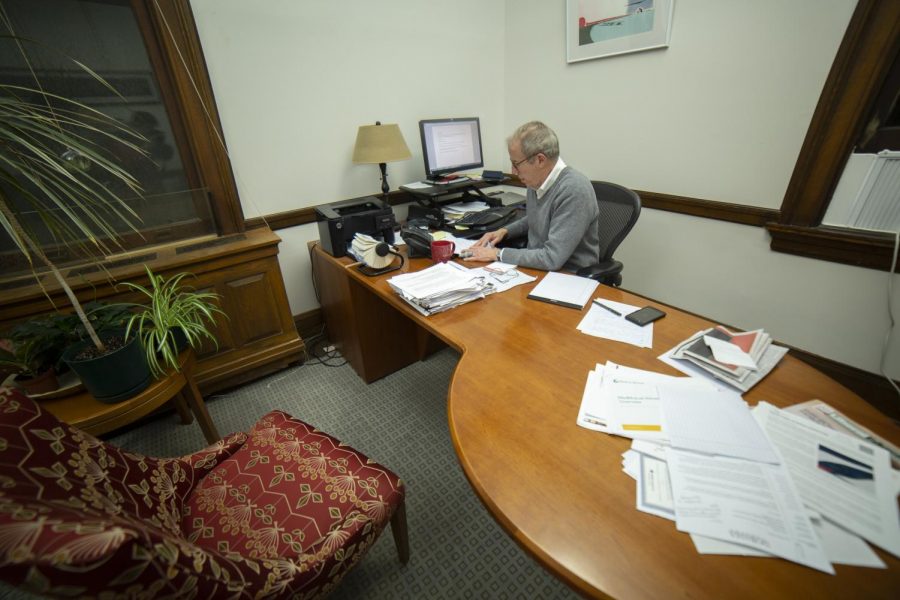 After serving for three years as chief of staff in the Office of the President, Ferd Protzman, OC ’75, will retire at the end of the calendar year. Protzman will be replaced on an interim basis by David Hertz, managing director at Cleveland-based crisis communications firm Dix & Eaton, while a national search is launched to find a full-time replacement.

Protzman returned to Oberlin in 2006 while working as an author and journalist for publications including The Washington Post and The New York Times. A German and Government double major at Oberlin, he spent a chunk of his career overseas and covered the fall of the Berlin Wall for the Times.

Protzman began his career at Oberlin in 2007, when he was hired by former President Marvin Krislov as the assistant to the president for communications. In 2009, he assumed a lecturer position in Rhetoric and Composition and taught Journalism Basics and private readings until June 2017. Protzman also served as a faculty advisor for the College’s debate and men’s varsity basketball teams.

“Every leadership team in every organization, there are these incredible people who are behind the scenes who make much of it happen,” President Carmen Twillie Ambar said. “People sometimes focus on the president. … I can’t express how important Ferd has been to helping many of the wonderful things that have happened in Oberlin over the course of the last many years.”

Protzman described the chief of staff’s role as multifaceted.

“You’re doing communications, you’re doing a certain amount of project management, keeping things on track,” Protzman said. “You’re the person when both sides decide they want something creative but they don’t want to do it, they say, ‘Well, okay, you do it.’”

According to Ambar, the chief of staff role still isn’t universal at colleges and universities across the country — she didn’t have one when she was president of Cedar Crest College — but many schools, like Oberlin, are recognizing its utility.

“I think that part of the reason why [the role is] becoming more common is because the presidency has changed over the last 20 years,” Ambar said. “The ability for the president to move all of these large projects along just on their own … at all the meetings, all the strategy sessions, all the discussions just really isn’t possible anymore.”

Ambar said that she relies on Protzman for a variety of functions, including setting communications strategy, screening requests that come to the Office of the President, speaking for her at meetings when she can’t physically attend, and more.

“He brings a kind of steadiness,” Ambar said. “Typically, people are bringing to this office the most complex, the most challenging, the most difficult issues that need to be dealt with at this institution. So the steadiness of thoughtful, deliberative advice is not as easy to come by as you might think.”

During his time working at Oberlin, even prior to becoming chief of staff, Protzman has been involved in setting the College’s communications strategy in response to a number of national controversies. This includes media coverage of a story published in the Review about cultural appropriation in the dining halls and the verdict in the lawsuit filed by Gibson’s Bakery against the College.

While Protzman admits that the institution suffers from a negative outside perception, he says that the College has learned important lessons from appearing so frequently in the national media.

“My views on communication have been that you try to communicate early, often, and that you’re open and honest,” Protzman said. “I’ve always tried to abide by that. … Communications is just an ongoing challenge, and there are things we could have handled better, responded more quickly, responded more clearly, and we’ve gotten better at that.”

Inside the Cox Administration Building, where Ambar and Protzman both work, Protzman’s private communication style is also well known.

Ambar also cited Protzman’s knowledge of Oberlin’s unique history and culture — and how these factors shape its present — as an important resource. Hertz, who will assume Protzman’s responsibilities beginning in the new year, echoed this sentiment.

“You don’t replace Ferd Protzman — he [has] an encyclopedic knowledge of Oberlin,” Hertz said. “He can tell you what class alumni are in, and he understands the importance of relationships with all the audiences. I’m just learning as much as I can from him before he retires. I dread the time when he says goodbye.”

While Protzman said he doesn’t recall his time as an Oberlin student with any particular nostalgia, he does have warm feelings toward the campus and the many roles he’s filled here over the years — including as a journalism instructor.

“There’ve been a lot of good things, but just working with Oberlin students — that’s been awesome,” Protzman said.

Visiting Assistant Professor of Rhetoric and Composition Hal Sundt, OC ’12, teaches a popular course on long-form literary journalism. He was also once a student of Protzman’s, undertaking a private reading in his senior year that focused on many of the same topics he now teaches to a new generation of Oberlin students. Sundt found Protzman’s pedagogical approach very engaging.

“He did this cool thing once where he wanted us to find a piece of journalism that we really disliked,” Sundt said. “It encouraged me to … [be] thoughtful about understanding why it didn’t resonate with [me], and that is, I think, such a productive mode of inquiry.”

As he prepares for his next chapter, Protzman hopes that Oberlin will continue to broadcast itself and its values to the world, even as national controversies persistently intersect with campus life.

“I think we’re getting better at … trying to figure out ways to tell our story,” Protzman said. “It’s about all the incredible work that goes on here. … I think that’s the part that we have to keep getting better at, is crafting a compelling narrative about what really happens here.”