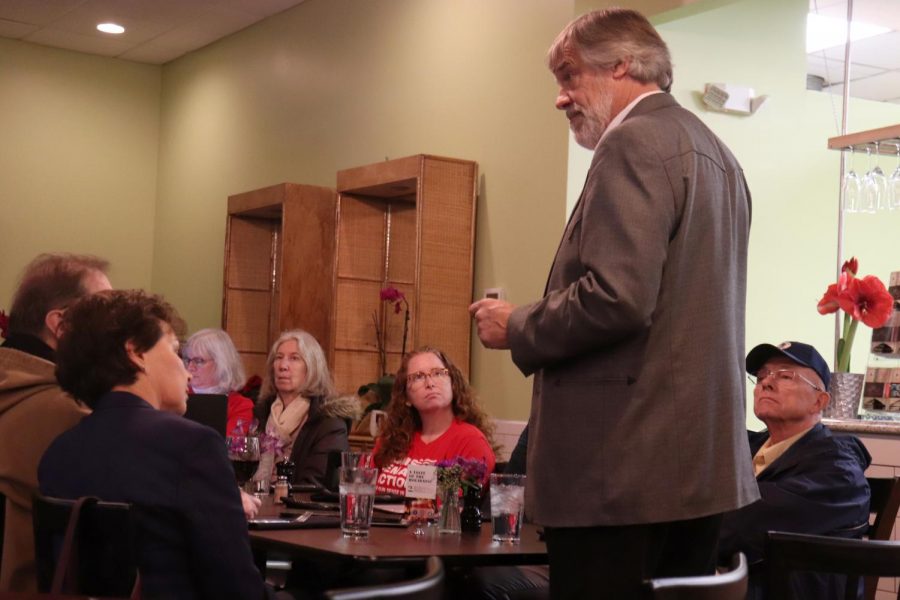 Chris Gibbs speaks to Ohioans at The Corner Joint on Wednesday. Gibbs aims to run as an Independent in the fourth congressional district race in Nov. 2020.

Chris Gibbs, who is planning to run for Representative Jim Jordan’s seat in Congress as an Independent, met with potential constituents at The Corner Joint on Wednesday. Gibbs is currently traveling around Ohio’s fourth congressional district, which includes Oberlin, on a listening tour as part of the exploratory phase of his campaign.

Gibbs is a farmer, the former chair of the Shelby County Republican Party, and a former supporter of President Donald Trump. After becoming frustrated with political polarization and the current administration’s trade war policies, Gibbs decided to step down as chair and run as an Independent. The district’s current representative, Jordan, has served in Congress since 2007 and is a creator of the far-right House Freedom Caucus.

Gibbs viewed Wednesday’s event as a chance to meet with voters and get to know the district.

Jordan has been challenged in the last three election cycles by Democrat and Oberlin resident Janet Garret. Many people at the listening session cited concerns about gerrymandering as a reason that her campaigns have failed to unseat Jordan. Gibbs hopes his run will be a chance to restore democratic representation to the district.

“I worked on Janet Garrett’s campaign last year, and the truth is the numbers just don’t add up,” College third-year Ilana Foggle said. “I did some research last year about gerrymandering, specifically in our district, and if 100 percent of Lorain County voters had voted for Janet Garrett, she still would’ve lost to Jim Jordan.”

Gibbs has an unconventional background that might make it hard for him to break into Oberlin students’ left-leaning political demographic.

“I could see him generating enthusiasm just from his ability to potentially win,” College fourth-year and OC Dems Communication Chair Ezra Andres-Tysch said. “I don’t think he fits the Oberlin political norms. I think where he really has the potential to strive is with moderate older white voters in more rural areas and people that have been disaffected by the trade war and by Trump’s just egregious personality.”

However, Gibbs feels that because Oberlin students often feel unrepresented by Jordan, he needs to listen to students.

“Oberlin students’ views are important to me,” Gibbs said. “Their views need to be incorporated into my learning as a representative, so I can carry those throughout the district and use them to have useful discussions with other constituents. … What I wanted to do is to prove by coming here … that I wasn’t afraid to come here and listen and learn.”

Gibbs specifically feels that Jordan’s leadership does not reflect the northern parts of the fourth district.

“Truthfully, [Gibbs] could stay down in Shelby County where he’s from and just try to mobilize the entire Southern part of the district,” Foggle said. “But he decided to come here — a three-hour drive — to hear from us, hear our perspectives because Jim Jordan has never done that. So that’s why I urge Oberlin students to at least pay attention to this race.”

Throughout the listening session, voters expressed concerns to Gibbs about a range of issues including gun reform, reproductive rights, the electoral college, and immigration reform. Another prominent concern was Gibbs’s ability to beat Jordan as an independent. Many listeners argued that Gibbs would be a stronger candidate on the Republican ticket.

Voters also expressed some concerns that Gibbs would split the block of anti-Jordan voters, throwing Jordan another win.

“My worry is that he gets 20 percent of the vote and takes significantly from the Democrats, doesn’t take from the Republicans, [which] gives Jim Jordan an even more like ‘I’m obviously the person that deserves a seat,’” Andres-Tysch said. “I think it’s an interesting and unique way of dealing with this unwinnable race.”

Still, Gibbs feels that he has a clear-cut strategy to win the congressional seat.

“My view was I needed to get to the real people,” Gibbs said. “[Running as an Independent] fit me anyway. It wasn’t an opportunist move. … Somebody has to stand up and I believe I have the pedigree for it because, coming from the Republican side, I have the pedigree to pull those votes.”